I agree, a basic cognitive test should be given to everyone getting re-elected or first time elections. Oh hey while we are at it how's Parliament going? Shouldn't they also get this done as well?

I think it's great that trump let the whole physical and cognitive test get released to the public. I don't think any prior PotUS had their full physical released, nor did any of them get a cognitive test done. I guess none of this matters though since Obama never released his physical, neither did Bush, or Clinton. Let's just trash Trump for being very open with the public about this. I wonder if Hillary would have done the same? (not really, I'm pretty sure she won't have released anything since that was her MO)

originally posted by: Guyfriday
...
I guess none of this matters though since Obama never released his physical, neither did Bush, or Clinton. Let's just trash Trump for being very open with the public about this.
...

.... I wonder if Hillary would have done the same? (not really, I'm pretty sure she won't have released anything since that was her MO)... 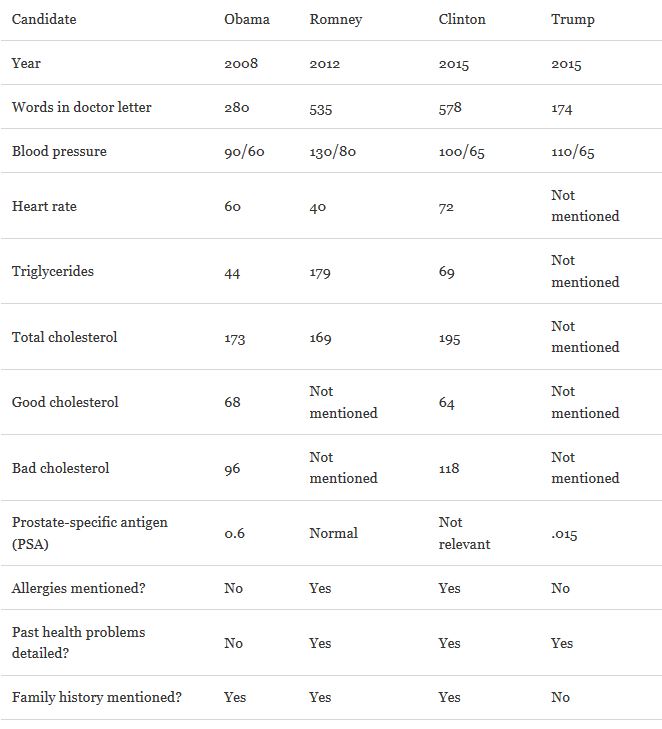 That will teach me. I should have said...oh never mind. I got lazy here, but I still stand by my point about the cognitive test not being administered, but should be mandatory for people getting re-elected/elected, and that British Parliament should also have this done.

As to the Hillary point that you show, that was for candidates and not for sitting Presidents. The reality is we will never know if Hillary would have been as public about her physical as Trump since she didn't win. I made my prior statement based on her behaviors as Secretary of State and how she treated FOIA Requests.

And what you are grasping is that there is precedent for the President to have a mental health evaluation every year.

Older people, usually those about Trump age, maybe a bit younger, around 60, start to develop a wide range of physical and mental problems at that stage of life. Dementia, is never really seen or diagnosed, until the person has gone through it for a few years. And while Trump may be physically fit, the question of his mental capacity is of concern and one that we should be concerned with and think about. Several times in the past, presidents have either had mental health issues, due to the stress of the job, or it had developed in the course of their life and it started to affect them.

So while no the man is not required for such, perhaps it is a good idea for him to have such, that way it would prevent a few things, that have been suggested, and talked about both in public and in private.


You just keep hoping for something that will never come. Trump aced his cognitive test. A test he insisted upon since all you knuckleheads were saying he had a problem.

TOP TRUMP Donald Trump gets top marks on Montreal Cognitive Assessment in medical exam – but how will you score?

You just keep hoping for something that will never come. Trump aced his cognitive test. A test he insisted upon since all you knuckleheads were saying he had a problem.

You mean he can recognize faces and knows his left from his right. The test does not evaluate mental health, just short term memory.

Actually the MoCA contains the clock-drawing test which is a good indicative test for signs of dementia.
But as I've said before - I would be happy when he does the clock-drawing test on live TV. I've seen too much erratic behavior to just accept second hand information. I want to see it with my own eyes...
So I guess I'll never be happy...

For me this will only ever be settled if he undergoes a independent and full psychiatric evaluation. For now this is all we have so I acsept it in the absence of any objective proof the contrary yet I remain very skeptical and still maintain he and all Presidents (or other state leaders) should be subject to a full and independent psychiatric evaluation..
edit on 17-1-2018 by OtherSideOfTheCoin because: (no reason given)


You are no different than those that accuse people of wanting Hillary to be charged with something.

All you want is more and more tests until eventually they come with one he doesn't do well on...just so you can claim moral victory.

I am not hoping for that. Have you ever seen or been through a cognitive test? I have seen and witnessed first hand such testing done 8 times. While it is simple enough, things like what is todays date, and what day of the week, and what month, and what year, what city are you in and so forth, it is used as an indicator of if a person does have a problem.

I have given actual real evidence and examples of how this job can affect a person, of 2 different presidents with real mental health problems, one that was dealing with depression and one that developed dementia. And the reality is that while this president is fairly healthy for a 70 year old man, with all of the symptoms of heart disease. (The high cholesterol is a dead give away, along with the man being over weight) It is good that he is physically capable of doing the job.

Just like the Russia meme the Mental meme falls apart too. LOL! 2020 will be a cakewalk for Trump! And it will have been paved by the insanity by the left because sane minded people will embrace Trump even more, seeing the antics of the left to be so hateful and corrupt.
edit on 17-1-2018 by thepixelpusher because: (no reason given)

I am intimately familiar with mental tests. I know someone with a medical issue. This Trump ginned up diagnosis is an affront to a true diagnosis and is a slippery slope to dictatorship where they jail dissidents over fake mental issues. Dems do this and it'll blow back on them at some point. Pandoras box sdcigarpig. Careful what you wish for.
edit on 17-1-2018 by thepixelpusher because: (no reason given)

I am not wishing for an insane president. No one does. They are dangerous and one that no country should be entitled to.

So this concludes right now, there is nothing that can be seen that would indicated anything neurological related when it comes to Trump.


I am not wishing for an insane president. No one does. They are dangerous and one that no country should be entitled to.

So you ignore a true diagnosis by a competent professional that says Trump is not mentally impaired and is sane!?? Guess nothing will satisfy you then.

I am not saying that. Nor did I, nor have I stated that.

I did not ignore the diagnosis by the doctor. However, Rear Admiral Ronny Jackson, MD, USN is not a psychiatrist.

I believe the mans skill set and training is in transitional medicines, with sills in emergency, hyperbaric, and resuscitative medicines. However I don’t see any psychiatry training there. So as a doctor he would have the basic training in some psychiatric medicine, including giving a cognitive test, but not enough to diagnose a person’s mental health. Nor could a psychiatrist be able to do more extensive medical procedures on a person, like Dr. Jackson does.

Now I did not say I did not accept his diagnosis. From what is reported, the President is in good health, with some health problems. Now, based off of the report, the man is taking medicine for high cholesterol, eats poorly and does not exercise. He is overweight, so given all of that, one would say that the man has all of the earmarks for heart problems. This is not speculation, but mere statement of fact, based off of what the best cardiologists would tell you. To have a healthy heart, one would have to exercise, eat a healthy diet, not have high cholesterol, and have a healthy weight.

So how is a person who eats fast food on a regular basis, is overweight, and has to take high cholesterol medication not in a risk group that a portion of the population is in?

I am not saying that the president it ill or sick, I am saying that the truth of it all is that he is in a risk group and we should be truthful, even the President, about this kind of risk.

Being that I suffered 3 heart attacks already I'm painfully aware that my healthy lifestyle and good eating habits mean nothing against genetics. I have a family history of heart disease that negated my healthy lifestyle. Pains me to see others with better genetics eating what they want and leading sedentary lives. I'm not saying it's positive to eat poorly or be sedentary, but I can tell you my own experience is that good genes can beat healthy lifestyle every time. I hope Trump has good genes or he may develop heart disease. Which, by the way, is common if you eat bad or not.
edit on 18-1-2018 by thepixelpusher because: (no reason given)

posted on Jan, 18 2018 @ 02:00 PM
link
The real questions is assuming something is actually wrong with the president's health, could he or his cabinet compel the Dr. to lie about the results under the guise of national security or something of that ilk? I am initially inclined to believe the Doctor, however the results are just so bizarre that I can't help but think that perhaps there's a reason Trump was able to get the Dr. to report that he's %111 of perfect.

In the doctor's favor: The doctor was appointed by Obama so it can't be outright claimed that he is a Trump lackey.
Against him: He did say that Trump could've lived to be 200 years old, was it not for his unhealthy diet...