Chaffetz on the Deep State: "Having lived through it, it is very real".

“There was hammers, there was BleachBit. When you listen to James Comey back in July of 2016, you really thought that she was actually to get indicted. But this is a closed case. So there no reason why the Department of Justice should hold back any documents from the Congress,” he said

“Is it the deep state?” Doocy asked.

“It is the deep state," Chaffetz said. "I was a little skeptical ... but I’m telling you, having lived through it, it is very real.

There ya have it, no hiding anymore, there are rogue elements in our Government and that’s treason. From here it’s quite simple, fill Guantanamo to the seams and start the Military Tribunals! Funny how President Trump is spending 500 Million on “upgrades” there?

Unelected employees of the federal government refusing to hand over documents, records and files requires harsh response. FBI has been compromised at the DC level, they know it too.

Congress is elected, send in US Marshalls and arrest FBI agents withholding records.

Trumps greatest gift to america is exposing all these scumbags for who they are. the political class, the media, the clintons they are all out n the open now where roaches get stomped. 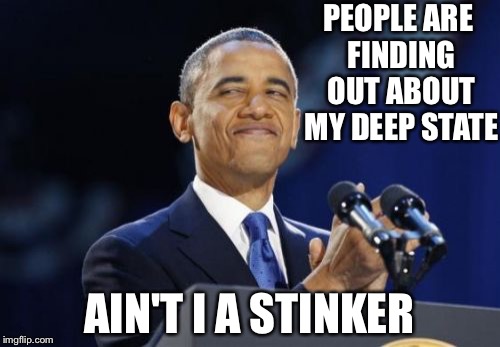 posted on Jan, 4 2018 @ 02:37 AM
link
Not a surprise I have been in the military or civil service for 20 years and there are always people managing to get into a position of power that believe they and only they have the righto decide what goes on in their little pond.

I imagine as you climb the ladder and drink the Kool-Aid in the cesspool that is DC the effect will only get worse since they have a larger pool to contaminate.

Is there anyone who doesn't believe the power of the deep state in this day in age?

Where's your quote from? ( source)

Sorry, forgot to put it in the OP.
thehill.com...

originally posted by: DerBeobachter
Aaah, for sure, it´s Obamas Deep State, not the Deep State of the "U"SA...
I bet Obama created J Edgar Hoover too, right?

Hey , at least the US didnt willingly hand over it's sovereignty and it's soul to the Rothschild's Belgium , huh ?

I personally still know many people that scoff at the idea of a deepstate. And probably nothing short of Obama telling them himself will get them to change their minds.

Question for the OP... do you really believe Trump is really the solution here? Like he's really upgrading Guantanamo so he can lock up all the Treasonous government folk?

Personally I would not give him that much credit.

If Trump starts locking up some of these 'Crooked Characters', he's going to get unbelievable support from the American people.

Operation Maximum Impact, 2018, I can dream.

I agree and I hope you are right.

I'm sure the media would spin it to look like a dictatorial regime change and get the people all in a tussy.