posted on Jan, 3 2018 @ 07:47 PM
link
And to think Wolff was invited into the White House. I guess to archive the first year. Blew up in their inexperienced faces apparently.

"fire and Fury" is already #1 at amazon.

posted on Jan, 3 2018 @ 08:33 PM
link
Said this part already, odd if there is proof of Trump treason this is being aired out for the public.

A credible witness subpoenaed and not able to talk about a criminal investigation?

This story just broke when it came to light there is even more evidence HRC staff blatantly lied to investigators, did have classified material illegally stored on personal laptops, and criminally mishandled passwords to sensitive government information.

And the DNC more than likely had money funneled to forgiven nationals for constructed dirt on trump?

Strange timing if the individual had the information all this time a book was wrote and published? Do I understand this right?
edit on 3-1-2018 by neutronflux because: Added and fixed

originally posted by: 0zzymand0s
The perception filter on both sides is awesome. Like real life "Doctor Who" type stuff.


If takes a day if Mueller can subpoena Putin. If not, probably take 10 years or more for this one.
edit on 3-1-2018 by yomss because: (no reason given)


Id assume he knew something and that would hold weight

but its not like that. It would be like if Podesta got fired by Clinton and he didnt have the same back door options that she has.

So basically disgruntled low level employee with no golden parachute.

Also Podesta and Clinton are in the same boat if either is complicit in each others mess. The blowhard as you put it is different in that he is trying to distance himself from Trump while selling his book. Its his DIY golden parachute.

Your overreaction is a product of confirmation bias on your part plain and simple. He is still only selling opinion mixed with lies and everyone knows it. This is just another instance of BS and conjecture stretched out like gum on a summer sidewalk.

Examined and cross analyzed and studied. All to what end? Is it for a dark hope that something of all these drawn out investigations and feverish energy directed against, that something, anything will stick to Trump?

Its almost so desperate that I can hear the sweat drip from your nervous brow in anticipation of more "opinions".

Dont you see it?

On the Saturday after the election, Trump received a small group of well-­wishers in his triplex apartment in Trump Tower. Even his close friends were still shocked and bewildered, and there was a dazed quality to the gathering. But Trump himself was mostly looking at the clock. Rupert Murdoch, who had promised to pay a call on the president-elect, was running late. When some of the guests made a move to leave, an increasingly agitated Trump assured them that Rupert was on his way. “He’s one of the greats, the last of the greats,” Trump said. “You have to stay to see him.” Not grasping that he was now the most powerful man in the world, Trump was still trying mightily to curry favor with a media mogul who had long disdained him as a charlatan and fool.

As soon as the campaign team had stepped into the White House, Walsh saw, it had gone from managing Trump to the expectation of being managed by him. Yet the president, while proposing the most radical departure from governing and policy norms in several generations, had few specific ideas about how to turn his themes and vitriol into policy. And making suggestions to him was deeply complicated. Here, arguably, was the central issue of the Trump presidency, informing every aspect of Trumpian policy and leadership: He didn’t process information in any conventional sense. He didn’t read. He didn’t really even skim. Some believed that for all practical purposes he was no more than semi-­literate. He trusted his own expertise ­— no matter how paltry or irrelevant — more than anyone else’s. He was often confident, but he was just as often paralyzed, less a savant than a figure of sputtering and dangerous insecurities, whose instinctive response was to lash out and behave as if his gut, however confused, was in fact in some clear and forceful way telling him what to do. It was, said Walsh, “like trying to figure out what a child wants.”


If Bannon, Priebus, and Kushner were now fighting a daily war with one another, it was exacerbated by the running disinformation campaign about them that was being prosecuted by the president himself. When he got on the phone after dinner, he’d speculate on the flaws and weaknesses of each member of his staff. Bannon was disloyal (not to mention he always looks like #). Priebus was weak (not to mention he was short — a midget). Kushner was a suck-up. Sean Spicer was stupid (and looks terrible too). Conway was a crybaby. Jared and Ivanka should never have come to Washington.


Bannons just an after thought now. The current obsession is Wolff book. Ironic that he was invited into the WH eh?

Steve Bannon tweeted that it was fake news. Who the hell is Michael Wolf? Dude is just promoting his book Fire and Fury, and he got all his prediction on Trump wrong. lol

The New Yorker is yellow journalism. Some of their stuff is outright ridiculous.

What Makes you think that is his?

Source: www.foxnews.com...
So apparently, those are indeed Steve Bannon's words in the upcoming "Fire and Fury" book? Isn't a cease-and-desist letter at this point, akin to closing the barn door after the horse has escaped? 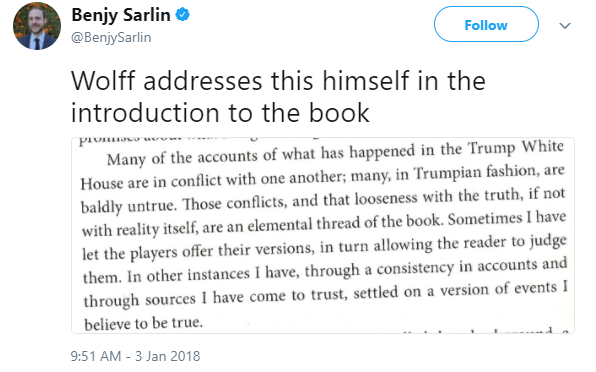 That is why most scholars believe that the book should be categorized as "Fiction".

Sounds like the derranged writings of a butt hurt liberal still coming to terms with an election loss. He is no fool though. He knows damn well there are still many just like him who will lap it up.

This fantasy novel may well become the bible for sufferers of Trump Derangement Syndrome.
edit on 4/1/2018 by UKTruth because: (no reason given)

How is meeting with the Russians treasonous? This is like Ronald Reagan continuing to sign off on Jimmy Carter giving money and arms to the Muhahadeen via the CIA and then hypocritically calling the Russians "The Evil Empire".


The Russians don't maintain a friendly stance with false religious cults. They recently made moves against the Jehovah's Witnesses. And aren't too friendly with the Mormons. Given that Smith of the Mormons unrepentantly uttering false prophecies and in the Old Testament thousands of people were killed by an angel for willfully following a false prophet.


You should have voted Democrat.

Really! It makes no different. Wake up. What and who really runs the show.