There are a lot of classified programs that are still classified, yet actually existed.

From locations that people aren't able to watch very well. If we knew where it was flying from, we'd know more about it, and probably be able to prove that it is real.
edit on 1/11/2018 by Zaphod58 because: (no reason given)

They didn't have to fly from near the F-117. They could have flown from somewhere else and met up somewhere near the target area.

At some point, this becomes coulda shoulda woulda. You can make up all sorts of excuses for some black project. This same arguments work for Bob Lazar's S-4. When you have no physical evidence, the sky is the limit.

It all comes down to "you can't prove a negative." This is why S-4, Aurora, Bigfoot stories never die.

not strange at all. logical and necessary.

Exactly! I'm in the camp that whatever this companion is, it not only exists but has to be extraordinary. There's some missing dots, but that doesn't mean there isn't any black ink


I thought it was bigfoot that piloted the "companion", I heard they had to modify the helmet to fit an 8 foot 'squachs head.

Forgive me if this has been mentioned in this thread, or if this idea is super duper wrong ...

I was looking at posts in regards to kingfisher/super hustler concepts and Mightmight, speedfanatic/others came across a potential companion to the U-2.

I doubt it, but could these be linked to the 117 companion or the same? His post has very similar verbiage to the low observable qualities described for the companion. Or, even if it's not related to the 117 companion, could there be a pattern that could be gleaned from? Here is his specific post (hope I did this right)

and isn't 'squatch too busy with beef jerky commercials to be flying on the side?

originally posted by: SpeedFanatic
a reply to: BlackDog10

@mightmight gave us this link which is pretty interesting.

The page is archived. You can view it by quoting my post and copying content(link).
web-beta.archive.org...://idr.janes.com:80/samples/idrsample4.html

Here you have screenshot 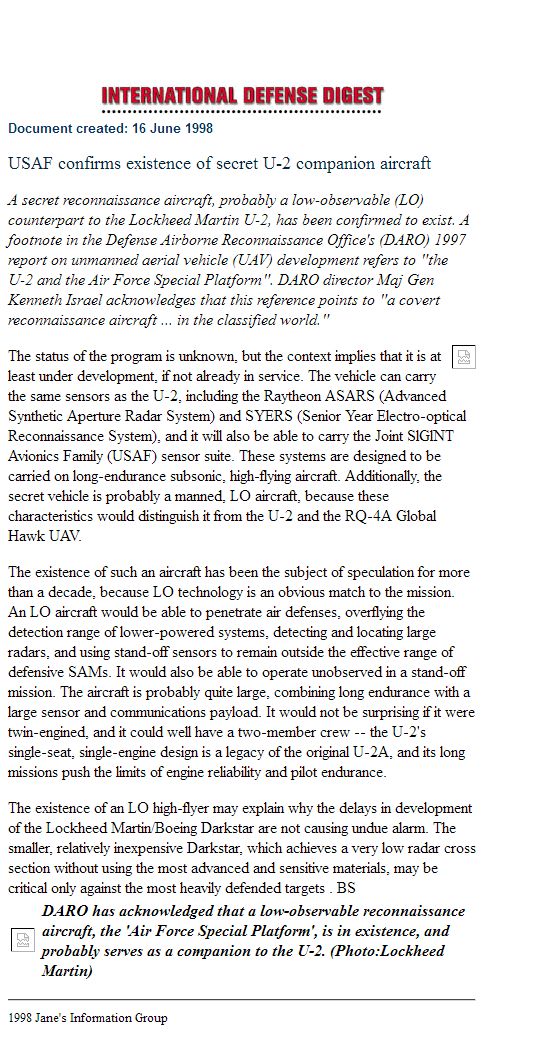 I think that "Zaphod" is the best person to ask questions of, pinning him down though is almost impossible, he's slippyier than an eel who's bathed in a tub jelly/jello mixed with cooking oil, but he is this forums version of the Hitchhickers guide to the aviation galaxy!!

A connection between the classified U-2 thing and the Companion is not impossible but unlikely.
The U-2 is a strategic recon platform, it wouldnt operate in the tactical strike realm. Any black world companion would do something similar. But there is no info on whether or not that thing is truely a black companion to the U-2 or something else.
In fact, there is barely any info about it.

This is the main source on which the article you linked is based:
www.dtic.mil...
look for ,Integration for "Plug and Play" with U-2 and Air Force Special Platform'

This line looks like it implies that the U-2 and the AFSP are two different vehicles.

Its particulary interesting because two ‚players‘ on pretty much opposite sites of the grand black world discussion going on have mentioned it.
One is wolfbane over at dreamlandressort. He made lots of interesting claimes most are probably not entirely true (but probably not entirely untrue either, burying the truth under a mountain of bs): www.dreamlandresort.com...

The other is Quellish (very well informed but usually equally sceptic to say the least), he links the classified site of the U-2 program to classified budget line item called Omega: www.secretprojects.co.uk...
Quellish is not entirely consistent on this, heargues that U-2 and AFSP are one and the same. I really dont think so, the term basically doesnt show up anywhere else and the pdf linked above.

Anyway Omega 0207591F (Advanced Program Evaluation post great renaming) was funded until FY2008. The funding history looks like this:
i.imgur.com...
Funding levels could certainly relate to an active program which went into high gear during the Iraq war years and was suceeded by something else (or the funding just moved elsewhere).

Anyway, thats pretty much all there is on Omega/U-2 Companion. As said, probably not related to the F-117 Companion.