I'm hoping for a very few speckles of multicolored stars in and around my new Q avatar so that it appears absolutely seamless with the background star field from the hubble deep field. If you wish to embed any symbolism with a certain star's luminosity relative to the Q or rabbit, by all means you have full artistic liscence - perhaps a twinkling and winking star might be neat if it was done right - it could if you want to go nuts, trigger a few twinklers here and there right across the star field, just for fun and aliveness, but subtle, not at all like a Christmas tree.

That would be so cool..

Edit to add: Here's my background 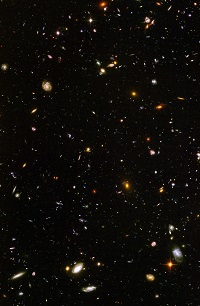 Thanks for any help in advance.

Sounds like a fun challenge and I am curious to see what people come up with.

I seem to remember that profile backgrounds are not allowed to be animated and only the avatar is. Which basically means that you can have a static background 200x1600 pixels and any animation you'd like to have should be within the space of your avatar 170x240..

If we only use the background, you'd end up with something like this. Animating star twinkle within the avatar perimeters should be easy.

So the question is...the Q bigger or smaller? More to the left or right? etc...


Ok, could we just do the avatar then, leaving the background exactly as is.

Edit Q to the left as is but vertically equidistant between the text lines?

Try setting this as your avatar...

just let me know about alignment..

Can you give that to me as an ats jpeg url?

I tried opening in paint to convert it to jpeg (I can't seem to upload otherwise) and it went funny as a very small outline.

With the already uploaded jpeg, I should be able to just plug it right in.

You should save the pic as .png and upload it to ATS as a png.

You could also use this link..

htp://files.abovetopsecret.com/files/img/kx5aa57ff2.png (add a t to http)

Done and perfect! Thank you!


Question: If ever I did want to go "twinkly" on that background and avatar - how would that be done?

I've seen people with what appear to be animated backgrounds - how do they do that?

What I'm thinking of, is an initial twinkle in alignment with the rabbit's eye (where it's looking) outside the Q, followed by a kind of transmission of twinkles here and there (not too pronounced but subtle) moving around to the rest of the background from that initial point, as if following a type of pathway around and then snaking down, but in an intriguing and interesting manner perhaps ending with a momentary flare in a lower pinwheel galaxy (could be Milky War), then following the same path of twinkles back again, pause, then repeat.

Thanks so much for your help.

What I've got now is precisely what I was looking for. I even like the way one galaxy appears inside the Q behind the rabbit's ear.

Edit to add: Come to think of it, I don't really need "twinkles" however subtle, even though it might be kinda neat and dramatic and attractive.

Curious though if it could be done.. that's all.

Best wishes, and thanks again, looks great, and with the galaxy behind his ears, that's perfect, synchronistic even.

Returning to the whole animated part...everything is possible but I think this picture will explain more.

Originally we only had the avatar dimensions (170 pixels wide by 240 pixels high. Maximum file size: Remains 75k ) to work with until somebody thought up a work-around where you could use the mini-profile background image in combination with a transparent avatar.

ATS allows this creativity but has also stated that animating the background is not allowed.

So we are free to add any kind of animation within the parameters of the avatar (the small black square in the above picture) but the combined file size of your avatar and background image cannot exceed 150k.

I hope I explained it well..

a crawfish or some type of being with the ability to go foward and backward with the claw on a drain in motion leaving the viewer wondering if the drain is being opened or closed.

i definitely do not hAVE the skills to create the way some avatars round here do.

also possible i think some type of hawk with eyes in the sky for the background.

originally posted by: operation mindcrime
a reply to: howtonhawky

this place just got a whole lot cooler

One small question....when you describe "a drain in motion" do you wish for this part to be animated?

It can be done but it would demand some more of my time since I am not very versatile in creating animated avatars (but sure am willing to try!!)

originally posted by: howtonhawky
also possible i think some type of hawk with eyes in the sky for the background.

This part of your custom avatar usually takes some time in order to clearly get a picture of what you have in mind...

you said : "also possible i think some type of hawk with eyes in the sky for the background."

Should this hawk be forward or backward facing?

Not the pictures I was planning on using but just getting a feel for your idea...

yea lookin ahead as in the first pic

thank you and have a good evening