posted on Jan, 2 2018 @ 08:45 AM
link
I like that the relationship developed when we were hunter gatherers and it was symbiotic. But all people had to do is find some wolf pups that had no parents and feed them and they would start a whole generation of faithful friends that could keep going from generation to generation.

How much do other dog like species figure into origins?

Supposedly they can't cross breed with dogs or, become infertile if they do.

But then where'd they come from?

Foxes, wolves and coyotes roam the same territory, are drawn together to compete at kills.

Here is a documentary on the Caucasian Shepherd, which is one of the last breeds that is a true working breed and not entirely domesticated yet. I don't agree with the breeders reasoning for breeding the dog as she advertises them for home protection and sadly if a pup was purchased for this reason could have the owner end up in a lot of trouble. I train dogs in a sport called Shutzhund which is highly demanding and a breed like this would not be suitable for the sport as they are not entirely domesticated and will not obey their handler because of this. I have a neighbor friend who has one of these dogs and is experienced with the breed as her uncle in Poland had them to protect livestock when she was young. Thankfully my friend is a responsible owner and has an eight foot non chain link fence (these dogs will climb over chain link) around her two acre property. She loves the dog, but does maintain it is not really a pet as it hates being inside, and although is protective of it's surroundings, does not show a lot of affection. Sadly when documentaries like this air on TV, the breed becomes more popular.

Great thread I did a search for a documentary that was made about the silver fox experiment that Russia did... I couldn't find it, but I did fond this one

I haven't watched it yet, I just did a quick glance through but it seems promising. Hopefully it'll be a contribution to the thread.
a reply to: Nyiah

I'm not too sure about that, wolves are great pack hunters but I can imagine they'll feel inclined to eat their kill as soon as it hit the ground, pecking order be willing of course.

Don't get me wrong though, we've created some abominations with our breeding for desirable traits. You can blame our success for that but 1000 years ago dogs were mainly bred for a job, most of our history in animal husbandry has been about enhancing desirable traits.

Dog's can teach themselves too, one of my past pets taught itself to catch birds in flight. Now that might not seem like much but it's a process of learning, she must have thought on it for a long time because her success relied on memory and observations.

She knew what birds to get and under what circumstances, she'd just stand in the middle of the garden and jump 4-5 foot high when a bird lined up correctly. Brilliant really, I've seen dogs try it but she was the only successful one.

Wolves don't do that, they don't have the luxury of experimenting. I've probably made my point terribly... Basically a dog has a lot more going on in the noggin than a wolf, I'll try find the documentary on the Russian Fox experiment.

It'll explain it better than I can, basically complex behaviour seemingly has a serious effect on genetics. Dogs are mutants, just like humans.

Awesome thread! Thanks for all the hard work.

I would throw my vote for dogs being domesticated (some would say dogs domesticated humans) earlier rather than later.

It seems the deeper our history is studied, the farther back things get pushed. As far as direct proof one way or the other? I have not heard a definitive method of acquiring that. It's all inference.

I'd say your right wolf's show the same traits as dogs and some will naturally gravitate towards humans.

Good history and cute images, thanks for sharing.

originally posted by: crayzeed
In the last few weeks I've seen new cave painting discoveries of leashed dogs on a hunt and they say it's 10s of thousands of years earlier than thought but for the life of me I cannot find the article again.
I think early man saw the potential of a dogs/wolfs help in a hunt and went out of his way to "steal" some cubs and domesticate them. Rather than an accidental meeting and gradual friendship for mutual benefit.

Suggested to be 8000 years old:
Leashed Dogs in Rock Art 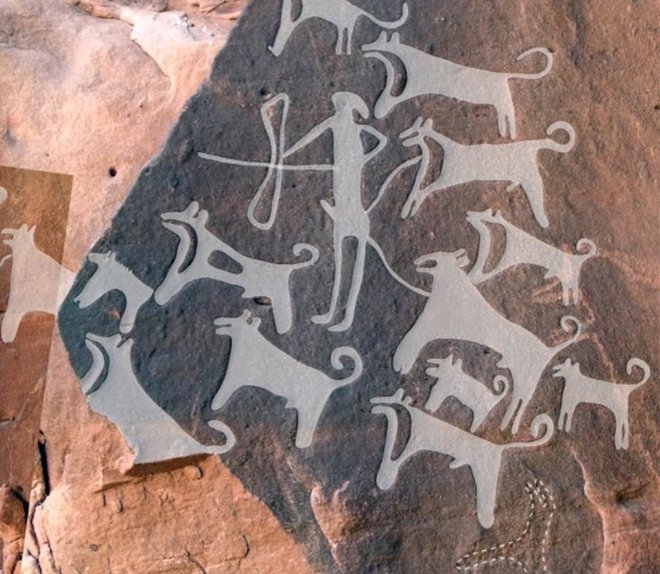 I would have expected more scenes with domesticated seeming dogs, and from earlier. Maybe even prehistoric art that we could recognise as being of dog like spirit/god entities. I'm gonna be on the look out now in future!

but you can surely bring Siberian Husky, German Shaperd, Alaskan Malamute or a Shih Tzu.

they bred from wolves and are great human friends.