Why is Wikileaks lying?

originally posted by: purplemer
a reply to: DJW001


But the OP proves that they have consistently misrepresented how they obtained and vetted the material.

The OP said Wikileaks where lying. That is very different from what you are saying here.


Is misrepresentation being truthful, or a form of lying?


I'm sorry, you make absolutely no sense and lack the most basic understanding of what a lie is. If anything at all, the statement from Wikileaks about the cabel is just a confirmation of what NYT did. No lie whatsoever from WikiLeaks.


Just repeating snippets from you OP, still without being able to point to the spesific, actual untruth, falsehood or lie from Wikileaks about the cable, the NYT or anything at all for that matter, does not make your case any stronger, you know. It only makes you seem obtuse. Your thread is still a hoax.

The OP is untrue and spreading misinfromation. Infact you said this several times in another thead.

Please stop lying. I have never said that the materials published by WikiLeaks is fabricated. It is the garbage from "QAnon" and other 4Chan hoaxers that you keep pushing that is, to use the Kremlin's buzz word. fake.

Are you claimimg that WL has posted up is false?

Or that they are protecting their sources from incrimimation?

Unfortunately though, Wikileaks knew what the NYTimes was doing as shown here: 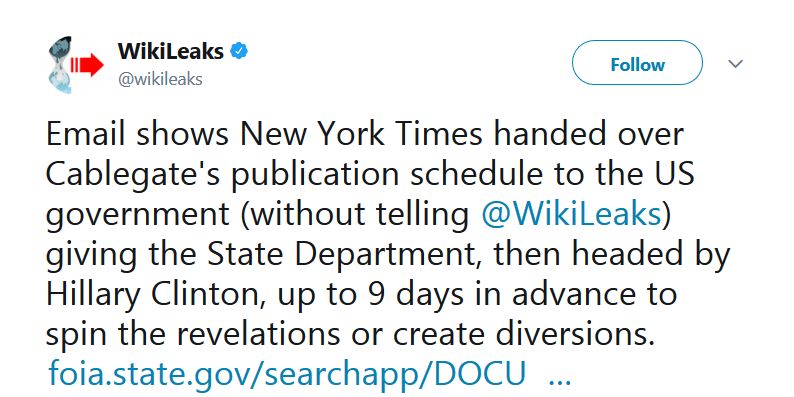 ...claiming that they were not aware of what the NYT was doing. It comes down to Wikileaks (high credibility), vs. the NYT and supporting media (low credibility). 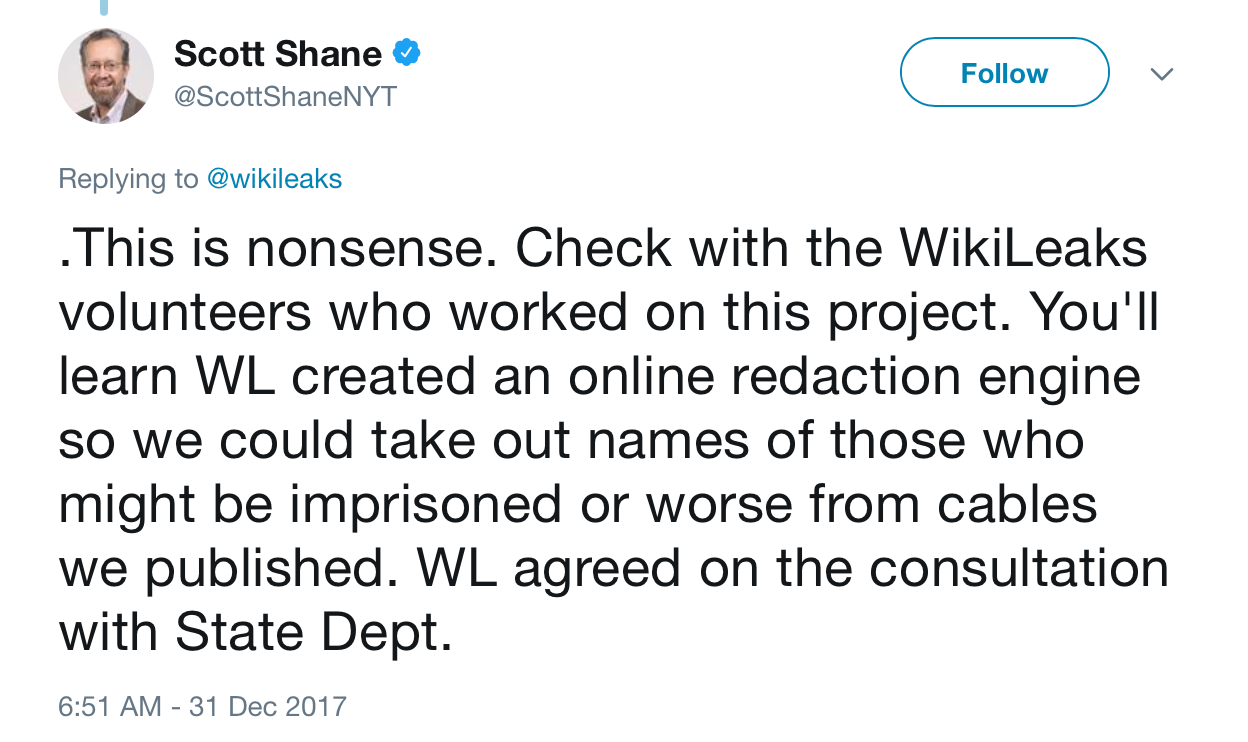 Does this sound plausible?

WIkileaks was aware of the redaction efforts and worked with the journalist, but had no idea that the NYT's was providing scheduled release dates for their stories to the State Department?

The NYT's has to somehow explain why telling the PR guy the topics of each day's release contributed to the redaction effort, everything else remains irrelevant. 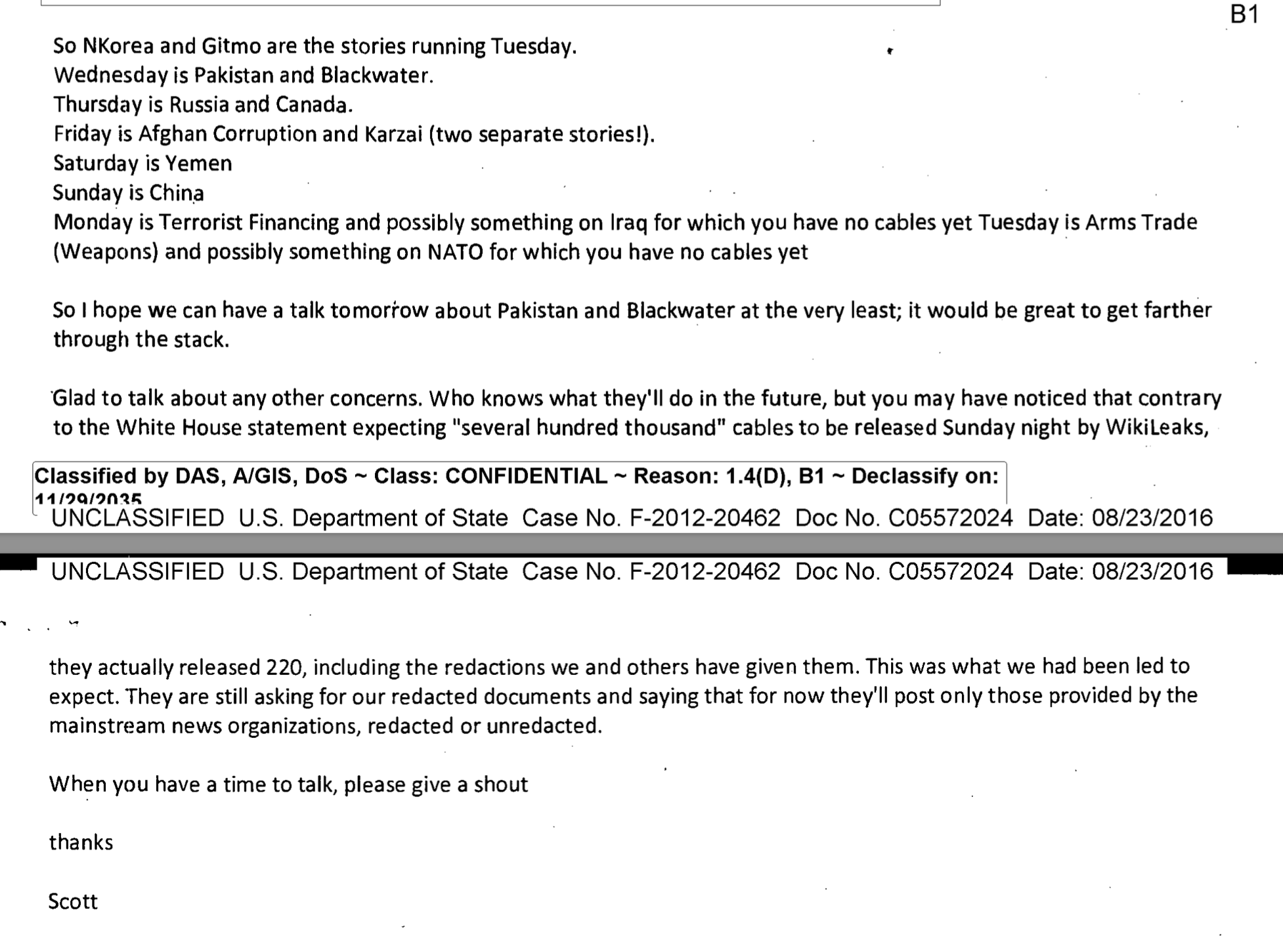 Basically, they seem to be using the information they have as a weapon against targets of their choosing, and not people who commit injustice against the people. Meaning their motives have no relationship to truth, justice, or your well being. I wouldnt be so quick to have any faith in Assange.

Are suggesting that the NYT is a reponsible news organization that places National security over news stories? Why did they out D'Andrea?
edit on 1-1-2018 by onthedownlow because: (no reason given)

“Can’t we just drone this guy?”

To be fair, WikiLeaks can only publish what someone has leaked to them. It is not like Julian Assange or other people in WikiLeaks sit Down and write or create the leaks themselves. WikiLeaks is just the publishing platform and they work hard to verify everthing they publish. Actually, in the 10 years since WikiLeaks was started, they have not - not once - been caught in publishing anything that is false, fabricated or manipulated in any way.

I also have seen a lot of people being very, very angry about WikiLeaks publishing stuff that have revealed the Dem party, the DNC and not least Hillary Clinton herself in all her corrupt, ruthless horror, while not publishing equally bad and revealing stuff about Donald Trump or the GOP. I would like to remind those people that David Brock, the man behind CTR/ShareBlue tried to start his own leak site, where people could submit information about Trump and get money for it. Nothing ever came out of it, not a single leak. I would link to this "BrockieLeaks" site if I could, but it no longer exists. Maybe there simply isn't as much dirt on Trump as it is on HRC and the people surrounding her. That is hardly Wikileak's fault.

(I am not a Trump supporter, by the way. Not a Russian bot or super spy agent either! Just wanted to say that before someone in this thread has a hissy fit, hahaha.)

WIkileaks was aware of the redaction efforts and worked with the journalist, but had no idea that the NYT was providing scheduled release dates for their stories to the State Department.

There was a schism between those wanting a conduit to WikiLeaks and those responsible for meeting the demands of Hillary's corrupt State Department.

Except they hold information and release on their own schedule.

It makes me wonder what their motives are for that.


WikiLeaks spend time verifying leaks before they publish them. Part of the reason they have a 10 year long perfect record.

Other than that, I have no knowledge about just how long they "sit on" leaks before they are published. I have never seen any information about when WikiLeaks have received leaks, probably because giving out times and dates could help identify the leaker. Wikilaks always protects their whistleblowers.

edit on 1-1-2018 by MostlyReading because: Clarification.

No verified source, no real substance to the claim, and HRC denied it with the qualification that it would have been a joke if she had said it.

I think she actually said it in her sleep and Bill overheard her, as she was in a thrashing night terror sleep paralysis due to her early onset Alzheimer's, but thats just my best guess.

I’ll try to make it simpler for you.

The “new cable” shows something that has been known about since the leak of the embassy cables, as shown in my OP.

Also, the insinuation that the NYTimes did it to give the government a heads up is a lie as well.

Did we have that exact message before, prior to WL releasing it.

You do know you shouldn't be reading WL's , leave that to the professionals at CNN.


What's the narrative they are establishing?

What relevant info have they been witholding that you seem to have access to? Please share it with us.