originally posted by: carewemust
I always lose interest when it's stated the U.S. Government is responsible for 911, Oklahoma City, Las Vegas, etc..

the oklahoma city bombings has far too much eyewitness and video evidence that something else went on there. lotsa links and evidence to military bases that had ryder trucks photographed in them just prior to the bombing, eyewitnesses that saw men wiring things up in the parking garage of the building, residue from bombs that do not fit the chemical makeup of what was used in the ryder truck bomb nor does it match the explosive power of what was in the ryder truck bomb, eyewitness's that saw mcveigh and another man in the ryder truck asking for directions just before the bombing, theres film of the ryder truck pulling up to the building and the passenger/passenger's get out but they wont release it to the public. timothy mcveigh himself said it was a military operation. theres a whole lot of strangeness around mcveigh aswell that just doesnt add up. this is one event where there is a plethora of eye witness testimony and physical evidence that just abounds. remember aswell that alot of these witnesses are not just random civilians but trained govt employees many of which were fbi etc. one thing that i find interesting is that its harder to find information about the oklahoma city bombing today then it was 15 years ago on the internet. its been essentially whitewashed. its hard to even find which agencies were working inside the building.

on topic. it will be interesting to see who ends up there. i bet the walls of gitmo could tell some tales
edit on 31-12-2017 by TheScale because: (no reason given)


what makes you think that any of them would end up in guantanamo? it's for people who are detained indefinitely without trial because we don't have evidence enough to charge and we don't want to let them go. you think these people are under some kind of semi-house-arrest with monitored ankle bracelets. how do you go from wildly speculative point A to wildly speculative point B?

Thank you again for your reply.


Yes with nearly 10,000 inicdments now i think some people are in very hot water. I am not getting into detail in this thread. Suffice it to say there are a lot of extra flights going to gitmo now, a lot more militarty acvity and rereferenes from Q.

I am not saying categorically that people are being shipped off. Thats why this thread is in the grey area. It looks like a real possibility though.

If you are interested please have a peruse of the white rabbit thread.


originally posted by: Mark1914
a reply to: purplemer

CIS seem to want to plug the drain...

Yes Mr Mark its my opinion that the CIA want to plug the drain. Lets see what the new year brings.

Happy New Year to you.

A couple of years ago they put my whole arm in a cast for a broken finger.

Unusual. ER docs usually only give pain medications as there is not much they can do with a broken finger , broken toe , or cracked ribs. Except for the normal finger splints or compression bandages.

I think they were building a straitjacket!


Now that I see President Trump is the initiator of this GITMO activity, it's worth paying attention to! thegoldwater.com...

Trump Orders Deployment To Gitmo To the astonishment of many, President Trump decided to send the Arizona 850th Military Police Batallion for a nine-month mission to Gitmo base in Cuba today.

The official statement of the Arizona National Guard says that “this is the second deployment for the 850th Military Police Battalion in the last 10 years in support of overseas contingency operations.”

The deep state is a transnational organisation.


power knows no bounds. it wouldnt be the first time the govt has used us as a tool costing american lives. whats funny is guess who is also fingered in the bombing, none other then HRC herself.
edit on 31-12-2017 by TheScale because: (no reason given)

Yeah, if you listen to the deep state traffic, MI6 gives its instructions to the
U.S. Government. It's no accident that all Free-masonic Lodges in the U.S.
recognize UGLE as their top lodge, from which all orders flow. And the whole
deep state is run by the Freemasonic order.

U.S. Independence is an illusion.

There has certainly been a lot of flight activity to Guantanamo recently..

ETA: This image an Anon complied from Flight Aware.. 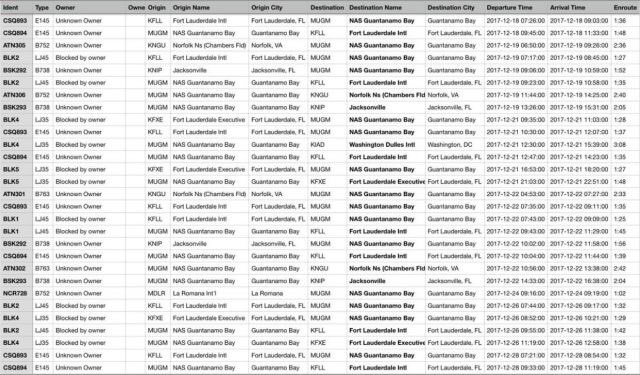 posted on Dec, 31 2017 @ 08:12 PM
link
I'm sure President Trump is getting sick of having so many high-profile criminals manipulating Americans.

One of Hillary Clinton’s wealthy pals paid $500,000 in an unsuccessful effort to fund women willing to accuse President Trump of sexual misconduct before the 2016 election, The New York Times reported Sunday.

Hopefully he's working with the Justice Department (Jeff Sessions) to have a mass roundup/arrest of thousands of them. The record number of Federal Judges appointed and confirmed over the past 12 months likely play into this overall crackdown. And now, GITMO is being prepared for those who are ultimately convicted. The Long-term planning now coming into view, with action being imminent.


Yeah, if you listen to the deep state traffic, MI6 gives its instructions to the U.S. Government. It's no accident that all Free-masonic Lodges in the U.S. recognize UGLE as their top lodge, from which all orders flow. And the whole deep state is run by the Freemasonic order. U.S. Independence is an illusion.

I have looked into some of this stuff and I really dont know. It certainly is a possibility that it is the case. There are some very old and established power structures within the UK.


power knows no bounds. it wouldnt be the first time the govt has used us as a tool costing american lives. whats funny is guess who is also fingered in the bombing, none other then HRC herself.

Good Lord...how can President Trump purge the evil when almost everyone who reports to him is affiliated with the traitors? I fear for his life sometimes.

Had to zoom in to see it. Thats a lot of flights to gitmo. Something is afoot.

As our friend Q said.


There are no coincidences.

Q said there is no need to worry about the POTUS. That he is well insulated in these troubles times. I hope so.

FYI GPS tracking devices don't have to be hidden in boots these days.

They are if you dont want anyone to know you are under house arrest.

Uh if they were under house arrest. They'd actually be in THEIR HOUSES.

originally posted by: Gothmog
Perhaps because they may have committed crimes against the US ?

how many US citizens do we keep in guantanamo?

why don't we keep people who are in guantanamo imprisoned on the mainland US?

do you see any connection between my two questions?

She had the boot on for nearly three months now. I have broke a lot of bones. Never three months in a cast. She said she fell down the stair in heals whilst drinking coffee.


I tried to get up and it really hurt,” she added, according to The Guardian. “I’ve broken my toe. I’ve received excellent care from your excellent health service.”

I broke toes before. You dont even need a boot for that.

originally posted by: purplemer
If you are interested please have a peruse of the white rabbit thread.

i am noticing that you don't really care to elaborate on your train of thought or answer direct questions about why anything might be occurring, but instead you like to redirect people to peruse threads of 100+ pages, as if the answer to that question is in there.

i suppose i should just be grateful that you don't invite me to eat your hat as well, or call me old bean... but i'm starting to feel pretty conclusive that you post a lot of rubbish and live in a fantasy world where all of this makes sense on some level.

good new is you have plenty of fans of that kind of thing already, so no need to try so hard to win ME over

Impossible, Obama said along with my great and inexpensive health care that I pick the Dr for he was closing that base. So there are no high profile prisoners going there.