posted on Dec, 30 2017 @ 05:32 PM
link
Water kettles called Kamandal are carried by holy people in India, but what kind of giant would have been able to carry this enourmous water kettle 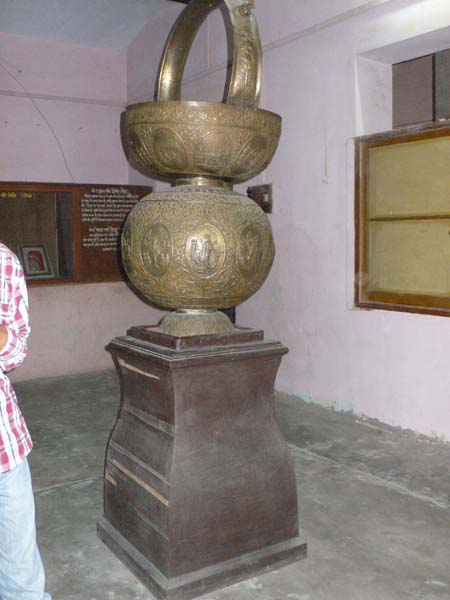 , it's almost as tall as a fully grown man.

An artifact used by a giant in our past? You decide.

Who or what are you "carrying water" for... heh.

I used to think all the giant tales were religious delirium... but now? We accept that normal animals were larger in the past, so why not sentient critters ...just like the Bible (and other tomes) reports?

I guess what I'm saying is belief in the possibility of giants is not necessarily married to thoughtless dogma.

My first thought too!!!

That is a very good observation, Elephant's are seen as sacred by some Hindu and were or are still probably part of there religious ceremony's so that is quite possible.

Still it is not alone and there are many over sized artifacts around the world and even over sized human footprint's some fossilized into solid stone that if they are what they appear to be would suggest humanoid being's or indeed human's of prodigious size to whom we would appear like toy's compared.

There is even a theory among some creationists that some of these giants were not actually giant's just larger than we are today and that is because they lived a lot longer such as Noah and his wife so they grew for a much longer time and matured much slower into much bigger people - normal sized in there day so NOT the giant's of the bible whom therefore must have been far larger.

For example when Ron Wyatt found that many including myself found the real ark of Noah he also nearby found a grave, near the grave was a carved image on a stone showing a family that matched in numbers Noah, his wife and his children, the woman in the picture had her head down along among them which he interpreted to mean it was her grave, that grave held a body that was about 10 feet tall.

Later after the discovery the grave which is in an area of Turkey near to the site of the Boat like structure many of us believe is the remains of Noah's boat was looted by relic hunters, the body dug up and desecrated and it's ornament's and jewelry sold on the black market, this was found many years later and distressed My Wyatt greatly and this was found only after a revisit of the site.
Sadly I can not find a direct link to a video on that but just to recap here is the controversial find that I for one am totally convinced is indeed the ark of Noah from the book of Genesis.

What it mean's of course is that they lived longer, were larger, we live shorter lives and mature at a much faster rate but are stunted as well so in fact they may not be giant's, the giant's therefore would have been far larger and we are actually a race of pygmy like humans in comparison.

He wanted everyone to have Jug Envy.

"Don't mess with Raj there, have you seen the size of his water jug? Bloody nora!!"

There is no evidence for giants.

The college basketball player I saw last night at the Circle K says different. I stared at the middle of his big ol' back for two minutes while waiting to purchase some poison... I would've taken a pic, but was afraid he'd find it rude.

I agree that there are only some lines in old books full of fanciful tales.. but that doesn't equal impossible.


An artifact used by a giant in our past? You decide.

OMG I would say that there are only ancient cultures who spoke of giants of the past and living at the same time! And i am not talking silly legends, they spoke of them very matter of factly. Add to that the seemingly global yet still unidentified civilization seen under water off the east Asian coast, in the mountains of Peru, and of Egypt which built with blocks weighing millions of pounds and that had their signature interlocking mechanisms you can always recognize them by. Anyway, it isn't even disputed that there were giants not even by scientists depending on what your definition of giant is. For example the conquistadors and explorers as recent as the 18th century are trusted in their accounts of tribes in south America they came across wherever he average female was 8-9 feet tall and the men up to 11-12 feet. This tribe has obviously gone extinct or has mixed into the majority population but those accounts are considered fact by historians.

Lastly, when you look at the evidence for bipedal hominids either existing in an actual young earth with bad present day science as far as the age of the planet or bipedal hominids existing millions of years ago with technology being cyclical, some studies have shown if they really were around back then (and there's a two million year old footprint to explain somehow or another) then just like mosqiitoa had five foot wingspans and dragonflies were as back if as eagles and hell, beavers and rodents as big as elephants if not bigger because of the oxygen levels which had trees towering a mile into the sky with a base as big as a city block, that the oxygen level would have made humans in the 15-35 foot tall range of course, you would never really notice a difference since everything else in relation to you would have also been the same ratio larger.

posted on Dec, 30 2017 @ 10:41 PM
link
Stick a pole threw the top and four slaves you have someones canteen. They are slaves it doent matter how big it is.

My great Grandpa is genius scientist with many titles. He built one of the first PCs in California He is a Chemist, Microbiologist, Paracitologist, Engineer, Mathematician, consultant, and was Director of Research for a fortune 500 company. He was summoned to The White House in the 70s by the Vice President for a private meeting and sent overseas on assignment by the US Government. He will turn 91 in a few hours.

He said this " The Smithsonian is hiding things from the public. He said Darwins theory is incorrect, and that's why they are withholding relics and and certain rermains

posted on Dec, 31 2017 @ 12:43 AM
link
I had a good friend who was a legitimate "giant."
That was his common nick-name.
Coon-ass, about 7 and a half foot tall.
Easy 400 lbs.
Big sweety.
His hands were the size of baseball gloves.
He could drink a half gallon of whiskey and barely show a sign of being buzzed.
He passed before his time from heart failure.

originally posted by: skunkape23
I had a good friend who was a legitimate "giant."
That was his common nick-name.
Coon-ass, about 7 and a half foot tall.
Easy 400 lbs.
Big sweety.
His hands were the size of baseball gloves.
He could drink a half gallon of whiskey and barely show a sign of being buzzed.
He passed before his time from heart failure.