Did the Patriot Missile Sysytem fail in recent Saudi Shootdown?

posted on Dec, 4 2017 @ 11:47 AM
link
Recently it was reported that the Saudi's using a Patriot PAC-3 intercepted a ballistic missile fired from Yemen. Dramatic footage emerged of the patriot battery volley off multiple missiles at the inbound and official reports declared that it was shot down. Now evidence is coming to light that ALL 5 interceptors may have missed the target.

This is a repeat of Desert Storm where the initial incarnation of the Patriot claimed success and alter analysis showed that it never hit its intended target.

posted on Dec, 4 2017 @ 11:52 AM
link
IIRC, those things need to be rebooted every now and then, otherwise the clocks drift.
With the clock being off, they can't accurately calculate where the target will be in a given time.

In this day and age, having an excuse and gaining consent of people to destroy another country can easily be done

posted on Dec, 4 2017 @ 11:55 AM
link
a reply to: FredT That system was never the best and was only used as a fast solution to a growing problem. Even the THAAD is not that great but it is better. The Patriot system uses the old accuracy by volume. THAAD does not therefore the chances of hitting the intended target is about the same.

posted on Dec, 4 2017 @ 11:58 AM
link
a reply to: Allaroundyou Keep in mind this is all based on what I know about the systems. I have never worked on one and never will. So I would like to hear what the experts have to say about this.

posted on Dec, 4 2017 @ 12:03 PM
link
Maybe we sold them knowing that they would not work correctly. And that might be a good idea because one day they will be used against us......again

posted on Dec, 4 2017 @ 12:06 PM
link
Patriot was designed as an anti-aircraft system. It was never intended to shoot down missiles, and evidence suggests it's not up to that task. While it's possible it might get lucky occasionally, there is no way in hell it could consistently shoot down incoming missiles.

In these Saudi cases, I'd like to first see some independent confirmation that incoming missiles were actually fired. Then we can move on to how plausible it is that they were shot down.

Otherwise, it would be a trivial task for SA to stage a false-flag incident by just shooting a few Patriots into the sky and letting them self-destruct.


It blew up somewhere. Remember that Saudi Arabia is mostly empty desert.

From what I've been able to find, the ballistic missiles we're talking about are basically modified SCUD missiles. I'm no expert, but I'm thinking their guidance is likely pretty shabby.

True but the feeling is that aerodynamic forces caused it to break up and you did not get a high order detonation. Very similar to last time.......

They didn't get any detonation from the looks of the closeup photos. Even falling from breaking apart in Desert Storm they still got some fairly impressive explosions. It doesn't look like it was a hard kill but it looks like it at least got a piece of it.
edit on 12/5/2017 by Zaphod58 because: (no reason given)

originally posted by: FredT
This is a repeat of Desert Storm where the initial incarnation of the Patriot claimed success and alter analysis showed that it never hit its intended target.


This is just silly media bs. Patriot PAC-3 actually works well most of the time, but apparently its far more interesting to focus on one potential failure. The media just loves bashing missile defense.

That number, which appears on the Raytheon website, is much larger than publicly available data from think tanks, the Saudi government or the other eight Mideast and African nations fighting in the Saudi-led coalition against Iranian-backed militias loyal to former Yemeni President Al Abdullah Saleh.

But in a Nov. 15 interview, Riki Ellison, chairman and founder of the Alexandria, VA-based Missile Defense Advocacy Alliance, not only confirmed Raytheon’s 100-plus figure, but insisted it was a conservative count. “Between the Kingdom of Saudi Arabia and the UAE, there have been over 150 intercepts of Yemen-launched missiles,” said Ellison.

posted on Dec, 10 2017 @ 05:31 AM
link
Shoot, they were working just fine last year when countering other rockets. What has changed? Perhaps, its the missile ... and I wonder who could be funneling that through to the nation with currently the worst sanitation and famine disaster of humans in the 21st century thus far? Yea, no # its Iran and very likely Russia if they are covering up a more serious loss as can be routine in national armed forces ...

originally posted by: worldstarcountry
The Yemeni Army’s Rocket Battalion launched three or four new ballistic missiles at their Saudi oppressors yesterday which they claimed hit their targets at the military base outside Khamis Mushayt, and is what regional press are reporting. However, the Saudis claim to have intercepted four targets. The Yemen video release of the new Qaher-M2 medium-ranged BM only shows three launches. Perhaps it was only three, but the Saudis launched six just to be safe. The video of the Qaher-M2 launches were easy enough to find. But I had to scour for some time through some twitter and youtube members in a language with funny letters that I do not understand (probably Arabic) to find the video of the Patriot defense in action, which originated on reddit. Video shows what is clearly at least one direct interception.


And the global war continues...


Now the bad news, thats the only surviving video. There were three others including the attack launch site, but the Ministry of Truth Global Engagement Center and NDAA 2017 decided those documentations no longer needed to exist. Its probably still around, but you would have to go searching with translated foreign text to find it. Im tired of doing that, nobody seemed to care when I did, and it hurts my brain to try and make sense of so many squiggly lines. # may as well be hieroglyphs, at least many of those are self explanatory.
edit on 12-10-2017 by worldstarcountry because: oh whoops, that was March of this year, only nine months ago.

Pics of all of the part of the missile recovered. Pretty consistent with it breaking up on its own and not being shot down

posted on Dec, 16 2017 @ 03:38 PM
link
a reply to: FredT
Well well, thats quite an interesting twitter account. I will be adding it to my sources. Looks like there is some possible evidence there of Iranian weapons smuggling into Yemen, as is pretty much known. But it is interesting to catch it on photos. 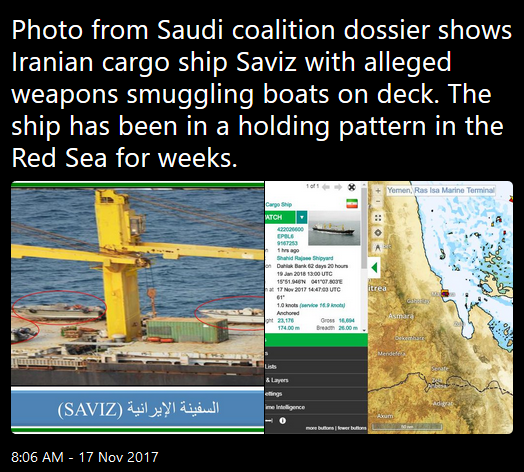 Yeah he posts some interesting stuff. Seems pretty pro Saudi, but Its nice to get all sides etc.

posted on Dec, 16 2017 @ 05:37 PM
link
When I saw the yahoo comments section on this, there were a few people saying that the system was never designed to take out the kind of missle they were aiming to hit - it wasnt fast enough. Many said that only the THAAD system would take it out. In this I am inclined to believe the comments because the patriots are an old system even if there may or may not have been some upgrades over the years.

That is true if you talking about the initial incarnation of the patriot ala Desert Storm Part One which used the PAC-2 variant. The Saudi's have the PAC-3 which is supposed to be for ballistic missile defense