originally posted by: Allaroundyou
a reply to: intrepid WHAT everyone uses AOL. Look it up on AOL....

Antiquity On Line? No thanks. Should I look it up on Net Navigator instead?

Ya and make just it plug into your 14.7 Kb modom
LOL


originally posted by: Trillium
LOL remember what happen the last time you tried that
We even found a way to burn marble now

We'll see who has the last laugh when a carrier group shows up in Saskatchewan.

You've gotta watch out for Saskatchewaners. They don't play fair.

That was a hilarious video . Never seen it before ,though I do like our homies , the Sheepdogs.

posted on Nov, 28 2017 @ 07:03 PM
link
Just hope it not the same captain that toll a lighthouse
to change it direction of travel LOL

I haven't read your posts so no harm,no foul.

People have been doing what they want for decades.
The only thing that changes is that the government will want their cut and will be making new laws.

Nothing says being free like government regulations and red tape.
I was already free...I just did it without the governments "help" and without their all knowing,very ethical and moral,approval.

posted on Nov, 28 2017 @ 07:21 PM
link
a reply to: DrumsRfun In that regard I agree with. I didn't look at it like that. Also if you haven't read my past post you should they had me rolling and I am pretty sure everyone else. Tis a good laugh for the night.
edit on 2/19/2013 by Allaroundyou because: (no reason given)

originally posted by: DrumsRfun
a reply to: underwerks
I am against legalization.

It was already decriminalized for recreational users...this is garbage.

The last thing anyone needs is the government getting their hands in there.

Gas,food,rent and everything under the sun has gone up in price in the last 30 years yet marijuana has been the same price.....HMMMMMMM.
...

OK, since you are Canadian, I have a question for you. Here in the US, cops use the presence of MJ (smell, smoke) as an excuse to search cars, trump up charges, stop drivers and, they hope, make a bust beyond the 'you have a busted tail light' ploy.

Are you telling me that in Canada, the cops don't stop people like this?

To me the real benefit for legalization is that it takes away the power of LE to use 'durgs' as a reason to stop and seize property and take away homes if the kids are having a party in the basement. Asset forfeiture (AF) is a big moneymaker here for local cops and state cops.

If they make the most commonly used 'substance' to make their case null and void, that takes away a lot of police power, I'd think.

If AF is not, and has not been happening in Canada, then you're lucky, and I see your point. But if they are doing it as they do in the US, then there is a big upside to legalization.

What's your thought here since you have direct experience with Canadian LE.

originally posted by: FauxMulder
I asked in a different thread and ill ask again here.

From what I have gathered it is a vicious aquatic beast that drinks all your beer. They secrete blended whiskey from some sort of orifice and give us hangovers from Hell. Bad dudes.

If they smell it and can tell your driving under the influence of pot. then you will get in sh#. Having some on you isn't really a big deal. I think you can have 30 grams or something. anything over, you might get a fine. same for growing, most likely a fine.

posted on Nov, 28 2017 @ 08:03 PM
link
As a Canadian, I can tell you that this changes absolutely nothing other than the Government now getting a piece of the pie.

posted on Nov, 28 2017 @ 08:15 PM
link
It's long overdue. For most of human history marijuana was legal, and used for all manners of recreational, industrial, and medicinal purposes.

originally posted by: knowledgehunter0986
As a Canadian, I can tell you that this changes absolutely nothing other than the Government now getting a piece of the pie.

At the same time, there are some safety things that improve such as not having laced weed (with other drugs), reducing related trafficking crimes (yes people get robbed at gunpoint and shot for large shipments of weed), and knowing how strong the marijuana is. A great example of how the legal weed movement has improved quality of access is that in the old days (and still in many places), if one made marijuana food (edibles) or bought them, one couldn't tell the strength until one took it. Often it was either way too weak, or WAY too strong i.e. someone starts tripping out.

Now, with legal dispensaries, much of the edibles comes with exact milligrams of THC as tested by a lab. What this means is someone can safely gauge to a reasonable level how much is okay to take. For example, the Colorado medical guidelines say that 10 mg is a basic light dosage, which of course would vary a bit by tolerance and sensitivity. But with this change it's less likely some hippy will accidentally take a 100 mg brownie and flip out.

Finally, when illegal there isn't much customer choice for most, and consumers only get what they can in a given moment, even if it's high grade. No illegal source for an average consumer is providing a literal store full of choices.

Thanks for the serious question.


The police do use the smell of marijuana as justification...yes.

Illegal growers have been around forever obviously,since it is not legal.

The government will give people legal right to grow and anyone else found growing without permits will get hit way harder than they would have before legalization.
They took something that wasn't that big of a deal to begin with and criminalized the crap out of it.

When legal...if the regular guy who has been growing weed for years illegally,starts growing without a legal permit,he will get a bigger fine and/or sentence now,than if he was growing when it was illegal.
The government hates competition.

Taking something decriminalized and criminalizing it,is really dumb.
Its has been painful to watch potheads rejoice so ignorantly because they want to feel they won....NEWSFLASH...YOU LOST!!


When it comes to seizure of property,they take everything now as it is when they do drug raids on growers and dealers.
I think they will make a lot of money going after illegal pot growers.
They are looking up ways to charge people with DUI or something like that so yes...if they smell it,they will have the right to ask and follow up.

I hope I answered your question...been a long day.

posted on Nov, 28 2017 @ 08:29 PM
link
I expect an exodus from the US towards Canada. A half million people will move there and because they are getting high, they will forget to pay taxes on anything they make there.

Now if the US will follow their lead,
North America will be a much happier place!

originally posted by: knowledgehunter0986
As a Canadian, I can tell you that this changes absolutely nothing other than the Government now getting a piece of the pie. Smoking weed is as free and accessible as it always was.


There is a really big point that you are missing. Right now, marijuana use criminalizes users. Getting popped can have large ramifications, especially for youth...criminal record can get in the way of job opportunities, prevent one from traveling to the US. With legalization, that goes away. That's why I support it. If you get a DUI...not my problem, you're on your own. But simple possession is no reason to have your life screwed up for you. 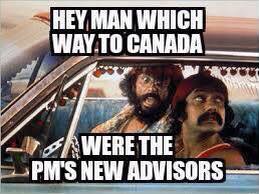 originally posted by: JohnnyCanuck
...criminal record can ... prevent one from traveling to the US.

Hold up, I just reversed my stance and now support keeping it criminalized.

God knows there's enough of you Canadians coming down here and being polite on our sunny beaches while taking advantage of our private health care system.

originally posted by: Quetzalcoatl14
It's long overdue. For most of human history marijuana was legal, and used for all manners of recreational, industrial, and medicinal purposes.


It is long overdue. I hope Canada serves as an example of how to do it right to everyone in the U.S who believes it's a bad idea to legalize cannabis.

I'm not even going to get into how stupid it is a plant has to be "legalized" in the first place.

To the people saying this changes nothing and is only the government sticking it's hands into it, you obviously have never been arrested for having a plant in your pocket. Not going to jail for personal use is what this is about, more than anything.