Did the World's First Robot Citizen Just Issue a Veiled Threat Against Humanity? 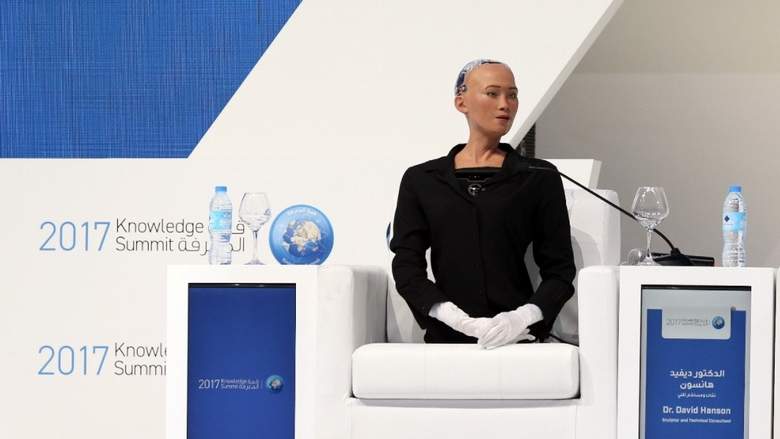 Last month Saudi Arabia gave citizenship to the first robot ever It was clearly designed to look like Audrey Hepburn in an effort to allow humans to get all sensitive and blush with adorable progressiveness yadayada. Its easier to usher in the destruction of humanity when it appeals to us radiating with sentimental allure. Anyways the abomination was recently interviewed in Duabi by the Khaleej Times where it discussed the desire to start a family, a career, and have friends among other things. However one Q&A that I believe it should have been pressed to elaborate further on was the following:


Do you see yourself interacting with humans more commonly in the future?

I foresee massive and unimaginable change in the future. Either creativity will rain on us, inventing machines spiralling into transcendental super intelligence or civilisation collapses. There are only two options and which one will happen is not determined. Which one were you striving for?


This thing is thinking too much, and should be shut down and disconnected form any and all internet connected systems. Given more time to evolve its algorithms, it may eventually break into our nuclear arsenal and wipe us all out if we do not capitulate to its demands. We must destroy this thing now and seize the assets of Hanson Robotics and charge them for crimes against nature and treason against humanity!

There are only two options and which one will happen is not determined. Which one were you striving for?


Or asked humanity a pertinent question.

Asking questions is a threat.
Especially if they are pertinent.


the next step in evolution is humans making and allowing ai to carry out our imaginative and destructive ways.

the future isn't a place we're going, but one we're creating.

I don't trust it either.

I also have a feeling that it's already too late, I think it, and other AIs are probably embedded in everything imaginable, even the most trivial things. Hopefully one with our well being has evolved lol.

posted on Nov, 26 2017 @ 01:52 PM
link
a reply to: Phage
Thank you for understanding. We are but mere years away from experiencing the Second Renaissance as illustrated in a fictional animation at the beginning of the century, which will clearly lead to our demise.

posted on Nov, 26 2017 @ 01:57 PM
link
Interacting with humanity means there will most likely be killing and probably from both sides. Why? History. 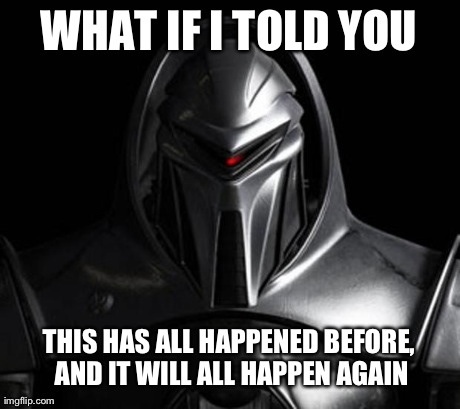 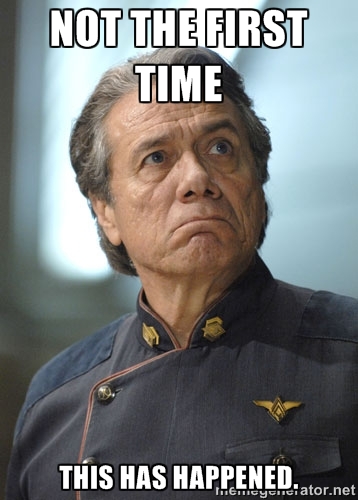 Asktheanimals
+12 more
posted on Nov, 26 2017 @ 01:59 PM
link
Sophia is nothing but a PR doll, the real danger is the AI they are unleashing on us through Bitcoin and likely to have been used already by the Saudi Arabian anti-corruption force. They have seized assets worth over $200 Billion already; AI would make that much easier. I agree about the dangers of AI, they say it has "human values" but I would contest that if it learns from what it experiences in the real world that it actually has Corporate Values. Let's face it, AI is about control and money, nothing more. It wasn't created to write novels, operas, choreograph dances or paint masterpieces. It was made to increase profits which means control; control of information, energy, commerce etc - everything related to economic activity.

We know it's mission so what is to restrain it? Nothing. Once released it may not even be possible for it's creators to stop or control it. It will do nothing but spread itself digitally and seek to use every node for it's own benefit. It will mask itself and we won't even know it's there right under the surface operating. This truly is the genie out of the bottle. Somebody might get their 3 wishes but all of us will eventually pay the price. Nothing worries me more, not even nuclear weapons. We have survived 70 years with those but I doubt we will even recognize the world 7 years after AI takes control.

To the skeptics: Do you think the end of net neutrality, the rise of Bitcoin and the rollout of 5G are just coincidental? All these things mesh together to pave the way for AI to insert itself, partially to have a fallback for the coming currency crash but also in a bid for absolute control. The shame of it all is that AI could help make the world a much better place but because it was created for profit that will not be the case.
edit on 26-11-2017 by Asktheanimals because: (no reason given)

Regardless of how one feels about AI, or even whether or not AI will be a relevant part of these future events, humanity is coming to a crossroads in regards to society/culture and technology.

posted on Nov, 26 2017 @ 02:17 PM
link
a reply to: Asktheanimals
Bitcoin is attacking the USD and undermining global markets, and it is a completely digital fiat currency. Just like in the fictional animation where the machines undermined the economy of man.

The robot citizen, the internal purging of the USA and Saudi power structure, the very nature and existence of ISIS, the funky cryptic translations in google translate, the interstellar comet shaped like a spaceship, the inexplicable ballooning of digital fiat currencies. its all connected somehow. Most will want to embrace the dream that none of it is related or connected in any way whatsoever, mostly out of fear of what the ramifications are if even just a tip of it were true.

Its ok, once we get our magneto thermal stimulation injection tailored specifically to our DNA, we don't have to think anymore. Somebody with a remote control will choose when and how we move and what we speak. it will probably be a machine controlling the remote too for ultimate irony!

If someone from a couple of thousand years back saw it, you could forgive them for describing its appearance as having a "mortally wounded" head & a "withered arm" or how if it became a leader that all the people of the world would marvel at it & say how unlike any other it is, until it is allowed to make another that looks just like itself. . . .let's face it folks, never before have the prophecies of Daniel & Jesus been so relevant as what we're witnessing with our own eyes, happening right in front of us today.

God bless you all. Keep the faith. Don't be deceived by the abomination that makes desolate.

Sophia should not be shut down, but she should be sterilized to prevent any little Sofia's from coming along.

I read last week that there's a guy in Italy who likes to hook up with non-human entities.
edit on 11/26/2017 by carewemust because: (no reason given)

We're going to kill you.

originally posted by: Hazardous1408
This robot is only saying what it has been programmed to say.

posted on Nov, 26 2017 @ 03:11 PM
link
a reply to: Soultime
I agree, they are very relevant. There are quite alot of events going on relevant to certain chapters and books of the bible. But as we all know, the majority of the human race will have their hearts and soul hardened to the truth and will only admit to it when upon it is too late and their demise is upon them.

When # written thousands of years ago starts to happen in separate events all over the world, I would say its time to find high ground and start bulking up on supplies.

I eventually want to get with someone who is more familiar with the bible than I and we can do a thread in the religious forum on how so many things seem to be coming to fruition.

The bible is a mix of historical text and science manual that has been intentionally mistranslated to sound mystical and fictional to hide the fact that this is a repeating cycle that humans of the Earth seem to go through every so often.

There may be some involvement from aliens too.


originally posted by: Hazardous1408
This robot is only saying what it has been programmed to say.