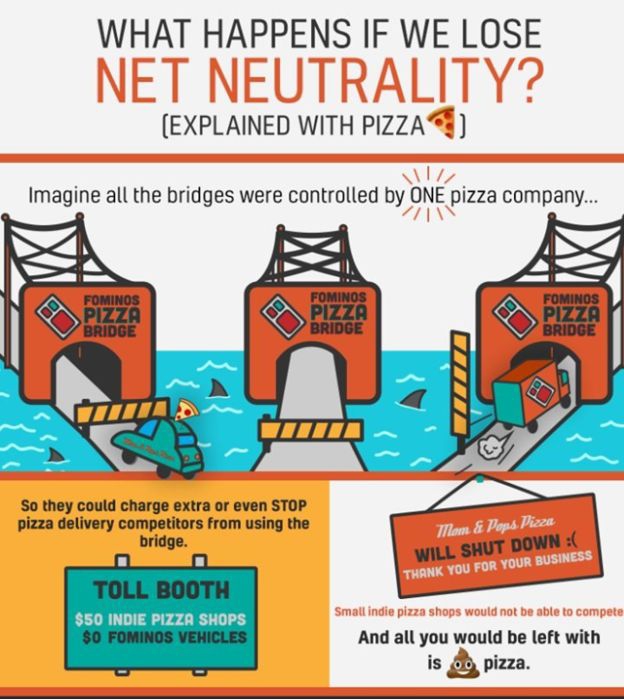 With all the recent news surrounding Net Nutrality I just wanted to get a better understanding of what it is exactly and what does our internet future look like if is passes or doesn't pass .

I am guilty of being lazy and not taking the time to research it. Thought maybe I could post it here and get a quick ATS crash course in it by you good folks .

I had heard about it a few times in the past but more recently it's been plastard all over Reddit. I try avoid Reddit politics because ... ( I'll save that for another thread ) but anyway any info on this would be great ! I will take the pro , con , neautrial opinion on this subject and draw a conclusion.

Thank you in advance .

posted on Nov, 22 2017 @ 06:27 PM
link
The main problem that the ISP's have is that internet data is like freeway traffic. Some users just read a view websites, download Email and use instant messaging. That's like getting postcards and letters delivered by the post office. Thousands of items can be carried by one post office van. Then there are those who like to exchange PDF documents, 3D models, images, textures and other data. That's like getting boxes delivered by courier. Take up a bit more space, but they can fin in the van. Then at the far end are those who download Linux distros for DVD, watch Youtube videos. That's like requiring a convoy of delivery vans to transfer all those Gigabytes. Extreme users are constantly downloading via BitTorrent. Equivalent of a non-stop fleet of delivery vans going to and from one address.

The ISP's argue that all these heavy-load users are ruining the Internet for everyone by slowing things down and that they need to "shape" traffic so that Email and webpage users aren't slowed down by all that video. They've got their way, but they cannot favor Netflix over Youtube or anything like that. However, there is no shortage of capacity for data to travel along fibre-optic links. It's now possible to have terabit speeds on fibre-optic as well as a near infinite range of optical wavelengths. So the limited capacity isn't a valid argument.

The fear is that they might slow down or even block rivals in order to market their own video conferencing services, streamed movies and anything that could possibly be a value-added feature. Like the way you have to pay extra to get
voicemail, caller-ID, three-way calling on a landline.

originally posted by: Liquesence
a reply to: Kapusta