"Sexual Misconduct" is the New McCarthyism

page: 1
16
<<   2  3 >>
log in
join
share:
Metallicus
+8 more
posted on Nov, 20 2017 @ 11:26 PM
link
More and more men are being accused of ambiguous 'sexual misconduct'. Now most (not all) of these charges are not proven, but once they have been leveled the person is essentially blacklisted and carries the stigma of guilt even without a day in court.

This entire thing reminds me of a witch hunt and it is becoming the new McCarthyism. The mere accusation is ruining careers and destroying a persons ability to make a living. They become a social pariah with no way to clear their name.

I am not talking about legitimate rape claims, but we now have a very ambiguous term of 'sexual misconduct' that can destroy a man without due process and we haven't really even defined what the hell it means.

Anyway, I find this entire thing concerning. I mentioned several weeks ago that it was going to go to far and I think we are moving quickly in that direction. We are destroying lives with no proof and no day in court.

Innocent until proven guilty? Not anymore.

You have a point. But I don't think that point equates to McCarthyism. Sexual predator always = bad. Until this term and then we elected one... so now it's this weird thing where family values voters have to pick between their own morals and party.

It's weird, for sure. And I definitely don't think 100% of the people accused are guilty but I do think it causes an interesting dilemma for a whole lot of conservative voters.

I agree with your sentiment to a point metallicus.

However it has been shown that congress has a literal tax funded slush fund to defend against these kinds of crimes.

Exactly how does that fit in to the "guilty until proven innocent" narrative?

To me it seems that their is an institutional level of guilt that, the guilty parties have taken steps to protect themselves from being exposed.

I mean really, the Franklin Cover Up was no joke, nor is pizza gate, yet we are to believe that this is simply a witch hunt?

To me it is clear that we are witnessing breadcrumbs being laid out to point the masses in the right direction. 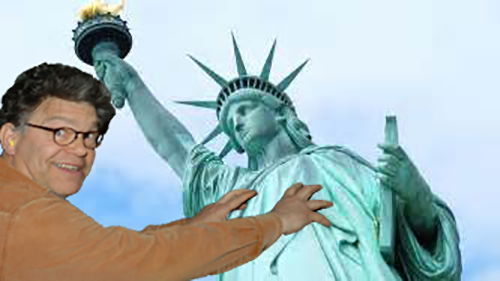 originally posted by: dashen
what if theyre just a pervy bunch in power, with nobody willing (until now) to bring the hammer down on them

Lol franken it up as they now say!!

I mean he said he was sorry! 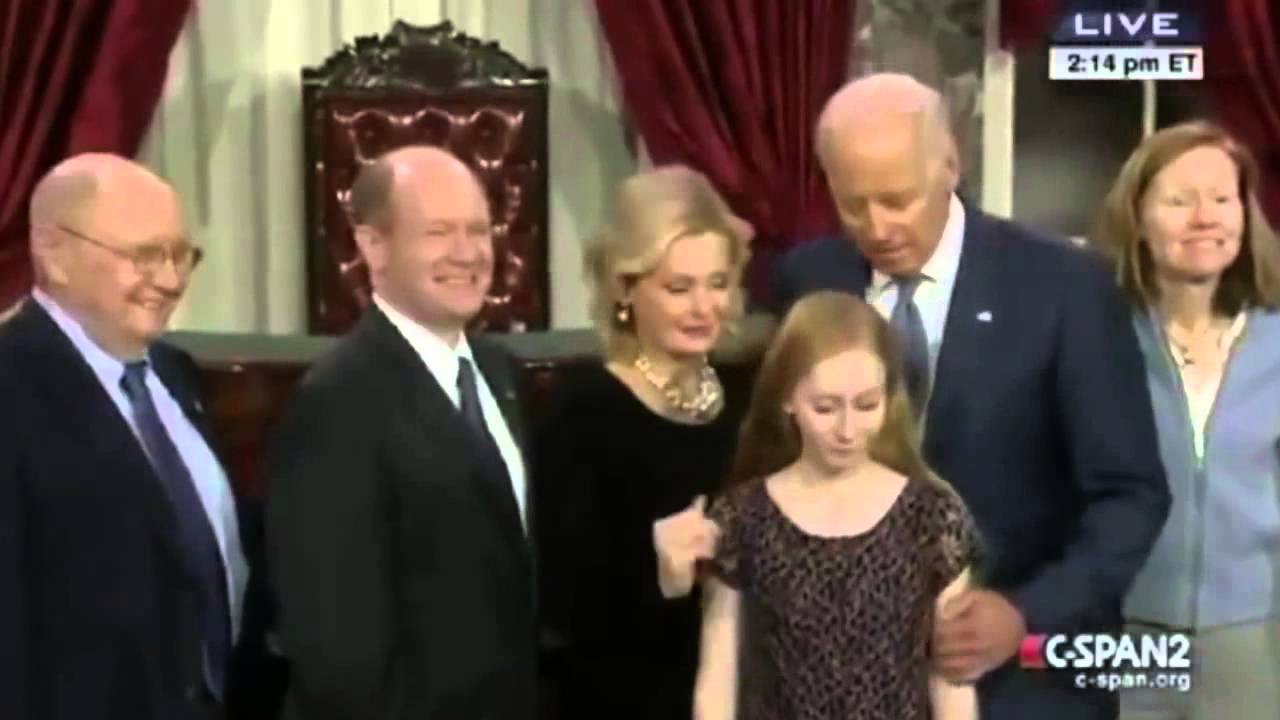 I refer to Biden as the most public Pedo ever, really the pictures speak for themselves and the calls to have the photos censored really only emboldens my claim.
edit on America/ChicagoMondayAmerica/Chicago11America/Chicago1130pmMonday11 by elementalgrove because: (no reason given)

posted on Nov, 20 2017 @ 11:41 PM
link
I used to dance a lot with women a lot when I was young, there was a little touching happening sometimes, that was the seventies.

I almost got my clothes ripped off coming out of the bathroom by a bunch of women at a strip bar with male dancers, I was embarrassed. My girl friend threw her drink in my face and left when I finally got through the women and back to the table. Why the hell did I go after her.

I guess you can't touch a girl anymore, that is the best birth control I ever heard of.

This is way out of control. I liked the seventies better, there was way less suicides back then than there is now. People had fun, there has always been those who are pushy and jerks, but now they have taken control of society and made it miserable

This wouldn't be a problem if guys kept our hands to ourselves & "man parts" in our pants, particularly when doing our jobs. There's simply no excuse for this crap. ETA: It's like people don't understand what the word "consent" means.
edit on 20-11-2017 by enlightenedservant because: (no reason given)

It's in danger of spinning out of control. Mainly, I think, due to the 24/7 news feeds and the rise of competing internet media sites.

If someone on one side gets accused, it's waved off as hearsay and gold diggers. If it's the other side, it's disgusting how a culture of rape and sexual abuse is tolerated!! There are obviously genuine concerns, but there's such a lot of hypocrisy and melodrama.

"Oh my God! He said 'nice ass' and still has a job?! Wait till Twitter hears about this!!"

originally posted by: enlightenedservant
a reply to: Metallicus

This wouldn't be a problem if guys kept our hands to ourselves & "man parts" in our pants, particularly when doing our jobs. There's simply no excuse for this crap. ETA: It's like people don't understand what the word "consent" means.

I have never had a problem keeping my hands to myself.

My point is these allegations are being made and destroying lives with no recourse. The mere mention of 'sexual misconduct' and there is no court and no way to prove your innocence. You are deemed guilty and your life is ruined.

Ruining lives without any recourse is as wrong as 'sexual misconduct'.

posted on Nov, 21 2017 @ 12:54 AM
link
a reply to: Metallicus
Hey Metallicus, are you new to conspiracy theory? Power only works if you have control. Blackmail is the ultimate form of control. Since ancient times people never got far in politics unless they had skeletons in the closet, so that if they disobeyed they could be thrown under the bus. You can bet that 100% of people in the highest positions are hiding something serious. It might seem like a landslide, but that's because it's hard to wrap our minds around how endemic it truly is.

Man I really don’t want this to sound as polical as it is going to, but what do ya do...


It’s trumps fault.. him and Cosby but for ENTIRELY DIFFERENT REASONS..

Which was Cosby because he established a legit presidence for a mega rich celebrity, falling publicly because of decades old rape allegations, that sound legit, but will never be proven..

Step 2: Trumps “grabbing” tape hits the airways and pretty much show trump is a douce bag.. not a rapist or a sexual assaulter, but someone willing to brag he can do whatever he wants because he is rich and famous.. and he made the comments ina Sexual way , so the correlation was easily made..

So now you have this douce bag, on a world stage... Say he will use his authority to acquire sex.. then OBVIOUSLY falsely accuse someone else of basically the same thing he (Trump) just boasted about!!!

So After the “grabbing “ comments paired with him bringing 3 known frauds to falsely accuse some one else of sexual assault...

It created a perfect storm of fake rape/sexual assault allegations...and just lowered the bar for everyone..

It created a situation where every victim of sexual assault who was paying attention to consider it a moral imperative to take this idiot out..

And the media decided to play ball right along with it by letting anyone willing to falsely accuse trump airtime..

Then from there it has just snowballed... some real accusations, some fake but too many to ever know the difference..

I agree completely..Man I really don’t want this to sound as polical as it is going to, but what do ya do...

I really do enjoy those times we find common ground with one of our ATS 'rivals'. I understand you not wanting to make this political because I didn't either. I put it in a rant instead of Mudpit on purpose.

That being said I do see your point, but it is not just Trump's fault. It is a function of PC culture run amok and a sick and twisted mainstream media that will do anything for headlines and agendas.

My biggest issue is the lack of due process. When mere accusations can do the damage then something is broken. I have had my eye on this since Herman Cain was leading in the polls and he got torpedoed by 'accusations'.

It pissed me off that even though there were zero charges and no follow up he lost his chance because of unsubstantiated accusations. What a great way to bring someone down with ZERO effort.

Anyway, without due process I am not going to enjoy this regardless of who is going to be accused. It is affecting everyone at this point and thanks to the media it is a death sentence without even stepping into court.

posted on Nov, 21 2017 @ 01:20 AM
link
Some of this historic stuff is very difficult to prove, and as has been shown in the past some career killing accusations have been false. That said, the problems seem to be institutionalised to the extent that such behaviour "accepted", and just like the historic child abuse investigations in the UK, where some false allegations have been made, it is right to investigate and prosecute.

Basically, if you have a line of women complaining of abuse, then there's probably some truth in it.

The problem at the moment is the trial by media, but these celebrities live and thrive in the media's warm glowing light, and many seem fated to suffer its harsh and uncompromising gaze. Trial by media is a problem, as the innocent can get caught up in a rush to the the bottom.

I agree with all of that..

Though I would agree PC culture has helped muddy the waters about what actually constitutes assault..

I find PC culture at its worst an annoyance.. propagated more by those who are railing against it more than those who are actually a stereotype cartoon liberal..

I say that because though I have met countless people mad about this or that random story of some individual being an idiot. I have yet to meet a conservative stereo type liberal..

Out of 350 million people I’m assuming they exist.. but if I’ve never met one I have a hard time believing it is a dire threat to our society..

You hit the nail on the head. The issue is 'trial by media'.

Right now everyone is guilty.

I have said it 1,000 times before on here, but I was very hopeful for a trump presidency.. not for the same reason as your average conservatives, but instead because I hoped he could cow the gop into single payer, addressing trade, raise minimum wage and other moderate/leftish positions..

Honestly, I thought he was uniquely able to sell those ideas after years of gop propaganda against them..


But after it broke he was gonna bring the 3 women to the debate, I researched their claims and they are nonesense.. blantant nonesense..

Like none have proof they were ever even alone with Clinton..

That made me angry in real life..

I find some one who would falsely accuse people of rape almost as disgusting as a rapist..

I don’t find it acceptable to push all these “elite pedophile rings everywhere” , pizzagate OR the false accusations against trump whatsoever..

Even as disgusting as I found trumps stunt, that applies to him as well..

Like you said earlier...this isn’t a political issue...it is a due process and fairness issue.