President Donald Trump announced Monday that the U.S. will designate North Korea as a state sponsor of terror amid heightened nuclear tensions on the Korean peninsula.

Trump said the designation will impose further penalties on the country. He called it a long overdue step and part of the U.S. "maximum pressure campaign" against the North. North Korea would join Iran, Sudan and Syria on the list of state sponsors of terror.

"In addition to threatening the world by nuclear devastation, North Korea has repeatedly supported acts of international terrorism including assassinations on foreign soil," Trump said during a Cabinet meeting.

U.S. officials cited the killing of North Korean leader Kim Jong Un's estranged half brother in a Malaysian airport in February as an act of terrorism.

President Trump announced that the United States has placed North Korea on a list of state sponsors of terrorism. I think this is a bold and intelligent move, as it further penalizes the rogue regime for illegal activities.

Tommorow, the Treasury Department will be announcing the largest and most severe sanctions against NK ever. POTUS cited the VX-nerve gas murder of his half-brother, the threats of unprovoked nuclear attack on sovereign nations, and the torture/killing of American Citizen Otto Warmbier as instances of NK direct/sponsored terrorism.

IMO, if NK has any hope of salvaging its crumbling government it needs to relinquish its offensive capacity and cease making threats.

posted on Nov, 20 2017 @ 12:21 PM
link
a reply to: JBurns
Is this the kind of formal preliminary move which could "legalise" an attack?
Was it made before the wars in Iraq and Afghanistan?

Good, although I am not going to pat trump on the back, for what is an obvious choice. They are terrorists who have threatened the United States, and have even gone so far as to make propaganda shorts, depicting the destruction of the White House, and Nukes going off all over the U.S. One day this is going to end, none of know exactly how yet.


I am unsure if it was used in the War on Terror, since Iraq was done under a previous UN resolution relating to WMDs and Afghanistan was a result of the Taliban's refusal to hand over Bin Laden.

I would imagine this puts more legal options on the table, including military action. 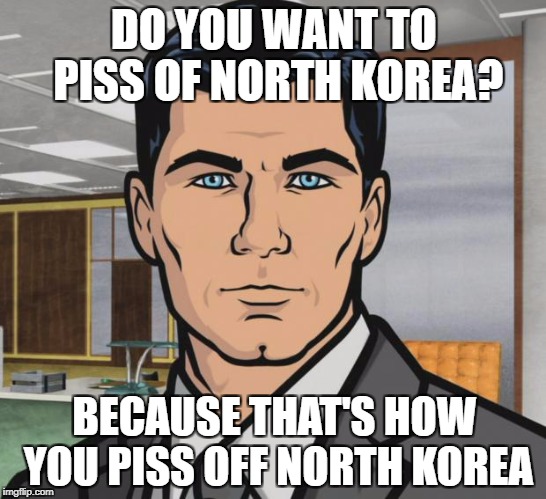 You..... maybe we shouldn't be going full redline with a guy that's actively talking about shooting nukes at us.


including assassinations on foreign soil," Trump said during a Cabinet meeting.


Agreed, IMO they never should've been removed in the first place. State sponsored terrorism designations should never be used as a bargaining chip (which Bush 43 or Obama used it as when they removed NK).


That would be a pretty silly move on NK's behalf. I guess it wouldn't be the first time someone had a death wish, though.

That was the firs thing that came to my mind as well when I heard this over the radio.

Mark the day folks,
Lets take bets on how long till Trump extends the war on terror to NK.
I say just after Xmas

We have 1st, 2nd and 3rd strike nuclear and anti matter capabilities.

But how about we use our big boy words and not have to go that route.

However, NK has already stated it won't relinquish its illegal WMDs so I fail to see what good talking will do. You and I both know they won't be allowed to pose a true threat to CONUS & our allies.
edit on 11/20/2017 by JBurns because: (no reason given)


We can't let fear of "pissing them off" interfere with official business. They'll just have to deal with it like the big boys they allegedly are. They can get as red-faced as they like, but the second they unlawfully attack us or our allies, it is lights out for their dictatorship.

Anyone who believes NK poses a serious threat to the US or our allies is mistaken. They can inflict some damage, but without a command & control system they're shooting in the dark. We have cyber, air and sea superiority and game changing technological/logistical advantages.

They have old Soviet hardware, and their soldiers are starving as much as the rest of their enslaved population. Not to mention that 25% of their population is considered "hostile," so such chaos would be the perfect opportunity to implement the regime change we all know CIA has been planning.

In my opinion, it is coming sooner or later. I'd rather us take them on while they're still "developing" their capacity, not after it is developed and deployed. NK has not demonstrated it can reliably deliver a nuclear weapon anywhere with a missile, nor do they have enough nuclear weapons to overwhelm our missile defense systems.
edit on 11/20/2017 by JBurns because: (no reason given)

A list we should be at the top of no doubt.

And possibly the US and the UK whilst he's at it...

Guess it's one way to apply further pressure but to what ends? They don't respond to pressure (seemingly, not up to now anyway) and with what objective in mind? What is he hoping will happen as a result of this? That they'll suddenly give up their nuclear ambitions?

I dunno, I fail to see what this is supposed to achieve...

Should have been done years ago but with that wuss in the White House - what do you expect.

Nice to have a real man back at the helm.

originally posted by: JBurns
a reply to: grey580

Not quite sure how the neighboring countries will feel about all the fallout, but I'm sure they wouldn't appreciate it that much..

Heck, they might feel a bit attacked themselves... things could snowball out of control pretty quick.

You know, you've been all over my spectrum. You say things that make sense and some thing that make me want to throttle you lol.

But this statement right here, I am 100% behind. You nailed this one


They absolutely do respond to pressure. Despite all of their bluster and threats, when is the last time they fired off a ballistic missile?

Seems to me they're already tucking tail. Talk is cheap, actions are what count.

IMO, force is the only language KJU understands.

Time for them to stop wasting their money on WMDs (and losing millions+ due to sanctions), and spending their money on food and infrastructure. Their system of government is antiquated, as no people have ever accepted living under tyranny for extended periods of time. Time for KJU to step down and for NK to join the normal international order.