Stumbled across this epic and fascinating short (13m) animated film by Lubomir Arsov, In Shadow. I find the timing of the release curious and very apt. The content curiouser still. Uploaded to YT 13/11/17.

It is full of symbolism, yet despite it being dark and disturbing, it is damningly true. And visually stunning.

Story artist for film and television, Lubomir Arsov, has just released his most recent creation titled In Shadow. It is a 13-minute animated short that is a powerful and sometimes grim look at the veil that modern society has placed upon nearly every epidemic that plagues the human condition. However, as the story progresses, the seeds are planted in the journey toward awakening and self-empowerment.

These kinds of films fascinate me entirely, can't find much about the creator. Anyone know/find anything about him? But an immense amount of knowledge (regarding the content) and effort went into creating this. It runs along the lines of I, Pet Goat, if anyone remembers that. 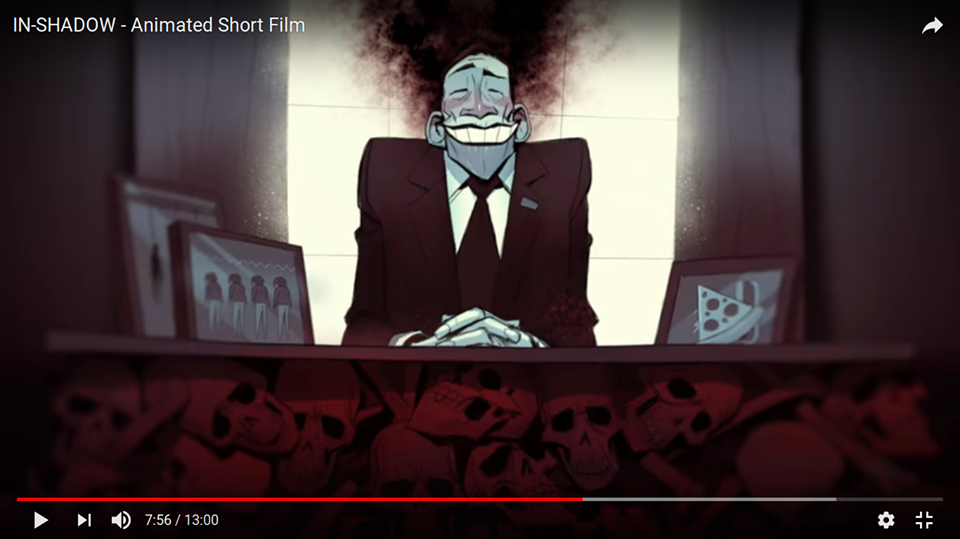 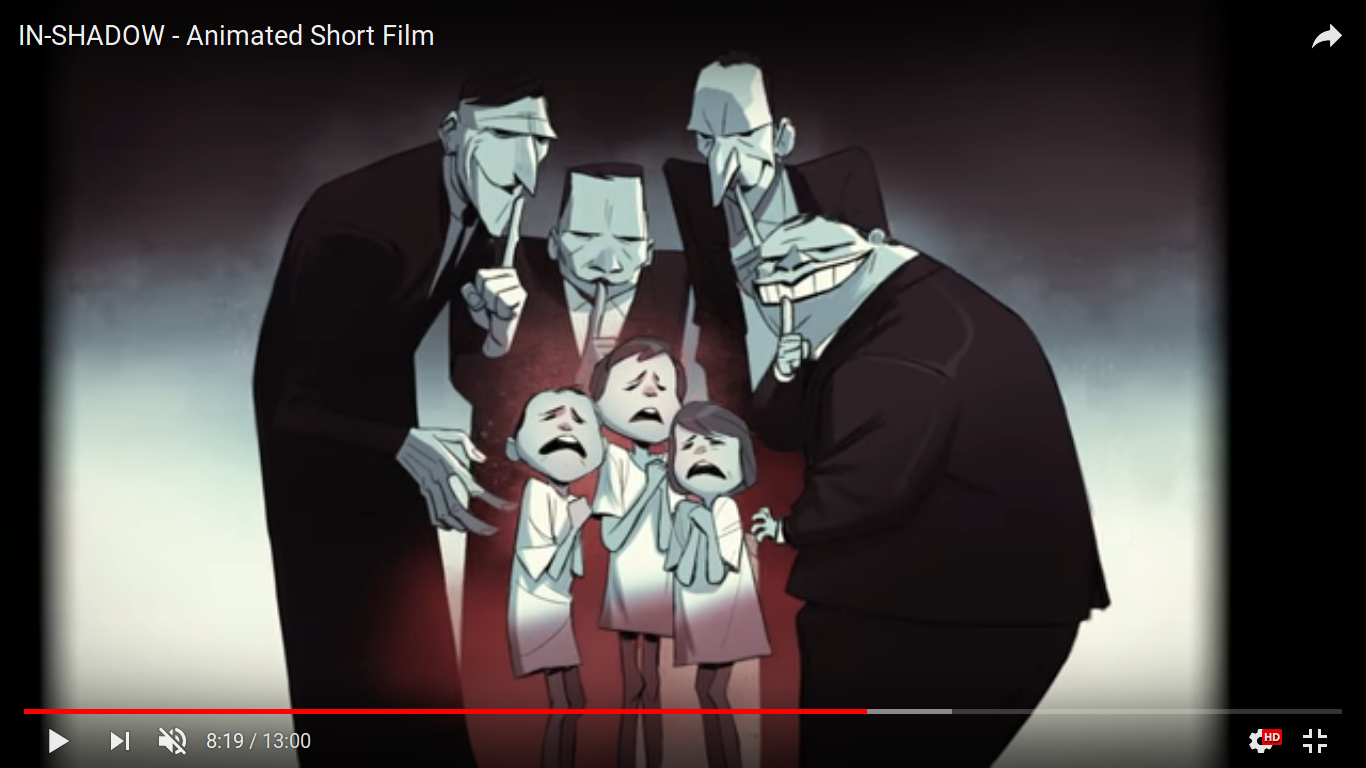 THis deep and dark portrayal of the present fragmented reality we find ourselves in. Symbolism runs deep through this narrative as easily as the blood runs through my veins. I have watched it twice and will again..

Masterful! Without a word being spoken or shown. Amazingly how the mind gets grasped and the thirteen minutes fly by as we recognize the hidden pain at the deepest level, every level, of how we have failed ourselves.

Thanks so much for sharing.

Whilst the few replies here focus on the dark tone of this short film I really think it is a message of hope, and inspiration. Reminding us that behind the illusion of the world we have created lies pure unadultered consciousness, fundamental freedom, boundless bliss and real, honest, incorruptible power.

Life can be hard but living is effortless...

It seems that they're quite literally the masks that people wear metaphorically.

I.e. neither are the 'true self'. The true self is only revealed at the end of the video, when man (And woman) realise their fundamental 'god' consciousness and break free of the illusory world

ETA: The idea of a 'person' or 'persona' literally comes from the idea of a mask. The masks worn in Greek plays were per sona (for amplifying sound) and the 'dramatis personae' the list of characters or masks that the performers would wear.

The whole notion of person in the sense of an ego is an illusion. Beyond the illusion lies the true self.

edit on 18-11-2017 by Indrasweb because: Because, clearly, I can't write a paragraph without multiple spelling mistakes


IMO, the mask represents the human collective mindset allowing propaganda to push a fake world upon us all. n some ways it could be seen as the antithesis of what the V for Vendetta Guy Fawkes mask represents - opposition to power.

It would feature right at home as the prequel to "The Second Renaissance" in The Animatrix (2003). The graphics arts look better than anything in that anthology, though. Music is dope, hard to categorize like the visionary Amon Tobin.

Intriguing, I hope the masses encounter it and that they respond well.

Can someone explain all the cubes?

Btw, the animation reminds me of some of The Gorillaz music videos.

originally posted by: fluff007
These kinds of films fascinate me entirely, can't find much about the creator. Anyone know/find anything about him?

Edited to add that, although well done, as expected, this kind of movie is not my kind, I found it boring, with all the things I was expecting to see.
edit on 18/11/2017 by ArMaP because: (no reason given)

originally posted by: Zcustosmorum
a reply to: fluff007

I've seen this before but not isolated. Very powerful metaphor so thank you for posting it.

originally posted by: Sublimecraft
a reply to: fluff007


Although by a different director and style. There seemed something very connected about the two fims.

Glad most of you enjoyed! IIB - yes it definitely would! I loved The Animatrix, super stuff!!

I've been intrigued by each peeps interpretation, keep them coming..

Pretty well made ...Could you imagine the sound track if it was something along the lines of a Pink Floyd tune . The imagery made for a great metaphor on the esoteric with much in the way of symbolism other then the black cube ..S&F

For those who didn't listen to it with head phones on? Give it a go! Totally worth it!

Watched it 3 times so far and find something new every time I watch. My take on the boxes on heads is being a slave to think "inside the box" versus think outside the box. At the end the boxes explode away and the mind is free.

Also at the 8:06 mark! Two guys blind folded wearing red and blue shirts pointing their fingers at each other while the fat cats smiled and laughed!! Awesome video!

I noticed the screenshot you posted in your OP has a picture of Obama with a picuture of pizza and hotdog on it. Thats pizzagate stuff. Funny how it appears now with all this QAnon stuff too.


Also at the 8:06 mark! Two guys blind folded wearing red and blue shirts pointing their fingers at each other while the fat cats smiled and laughed!!

Peeps need to see past the left / right divide. An illusion and easy method of control.

The cubes are reminiscent of the cube the dancing lady is in (pulled by strings) in the Bank of America mural. Possibly the limits placed upon a person by society. Ya know, “put you in a box”.

The pineal gland imagery at the end is awesome! The power lies within. Then the without changes. Death of ego (mask suicide) is the start.

Cool stuff! Time to put my mask back on so they don’t know...