The Joint Committee on Taxation (JCT) is a Committee of the U.S. Congress established under the Internal Revenue Code at 26 U.S.C. § 8001.

See how you will come out (on average) with the new tax plan: 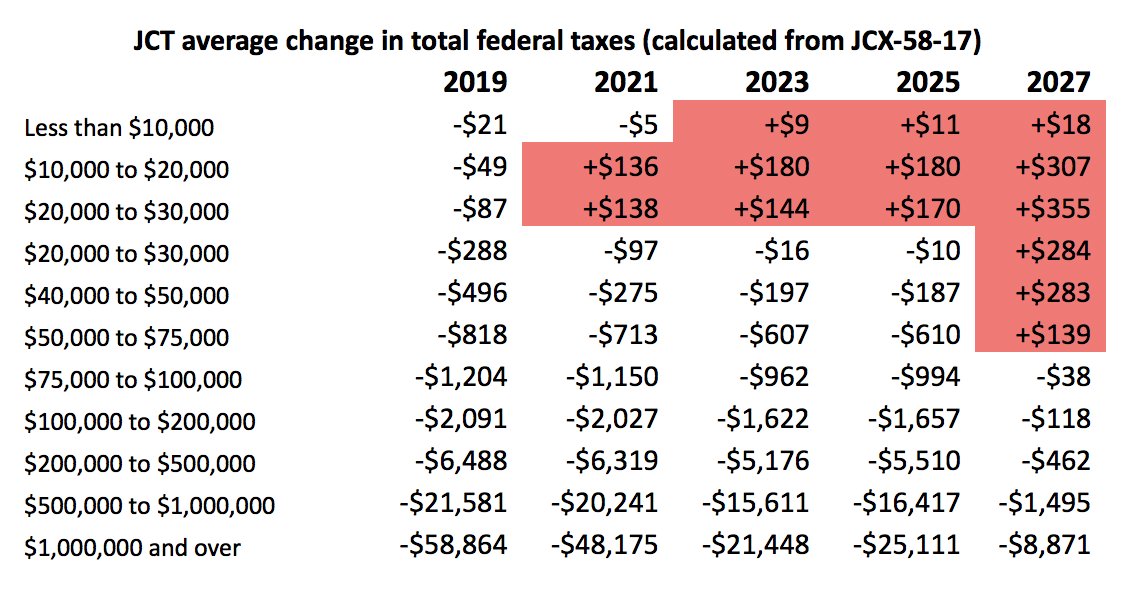 So basically, you are saying the people who generally don't pay anything now will eventually end up owing something?

I'm not saying anything!

This is what the Congressional Joint Committee on Taxation is saying.

More detail is available on the website in the document JCX-58-17.

posted on Nov, 17 2017 @ 04:12 PM
link
Due to high medical costs i have deductions greater than the standard deduction. Running the numbers for myself i will pay about $4,000 more in taxes if this plan goes through. If you look at the chart over the next 10 years taxes will increase for everyone earning under $75,000 and go down for everyone earning over $75,000.

What was that you said again?

posted on Nov, 17 2017 @ 04:17 PM
link
What is disingenuous about charts like these and people like the OP is that they assume people don't change income brackets. So just because you are paying X this year, it doesn't mean you may not be in a lower or higher bracket in the future.

Sowell does a good job explaining it...

It balances out the tax burden a bit.

What difference does it make to you what the government does with tax money if you aren't paying any to them?

I also have to wonder how many of the people who will have increases are currently not paying anything in taxes but still receiving a "tax return" (Earned Income Credit)? So this will likely just mean that will be less.
edit on 17-11-2017 by ketsuko because: (no reason given)

Need to get rid of welfare. Stop the corrupt government spending. Do away with any program that benefits anyone who is not handicapped and won't work. Do away with letting corporate America rob everyone with slave wages and everything would be fine

posted on Nov, 17 2017 @ 04:37 PM
link
You would have to take the higher exemption into consideration wouldn't you? I do not know if that is included in this chart.

It's like this dumb argument that rich people already pay more in taxes than everyone else...well...duh, they make all the money. You can slash their tax rate in half and they'll still pay a higher dollar amount then everyone else because they make so...much...more money.

Eight people own more wealth than 50% of the entire world right now. America hasn't seen wealth disparity this sharp since before the Great Depression. So yeah....support the tax bill now but try not to jump off a building in the next decade.

Non-citizens received more than $30 Billion in refunds using the EIC in 2014.
Straight up $3,000 for every dependent you claim and there's no verification of whether these dependents even live at the same address! Many don't, they live in Central America others still don't even exist.

That HAS to stop.
Illegal immigration is bleeding this country dry.
edit on 17-11-2017 by Asktheanimals because: (no reason given)

This is an average number - as stated.

But it is still unclear how the 'medical deduction' issue will pan out:

“We are pleased that the Senate tax proposal includes some important improvements over the House bill voted out of the Ways and Means Committee,” AARP executive vice president Nancy LeaMond said in a statement.


But the elimination of the medical deduction could still happen.


“If the full House and Senate approve different proposals, negotiators from the two bodies will hammer out a compromise version that both would have to approve before it can become law,” wrote Sabrina Eaton at cleveland.com.

Let us hope you are right.

The high income persons don't ever spend 'all their income' on goods (or services) - lower income people tend to spend their income at a much higher rate thereby stimulating the local economies.

Your logic is flawed.

This is magical thinking.

Of course - people move between brackets. And you can dream all you want about being rich - but the odds of it happening are infinitesimal.

It fact economic mobility in the US is on the decline:

It’s not an exaggeration: It really is getting harder to move up in America. Those who make very little money in their first jobs will probably still be making very little decades later, and those who start off making middle-class wages have similarly limited paths. Only those who start out at the top are likely to continue making good money throughout their working lives.

That’s the conclusion of a new paper by Michael D. Carr and Emily E. Wiemers, two economists at the University of Massachusetts in Boston. In the paper, Carr and Wiemers used earnings data to measure how fluidly people move up and down the income ladder over the course of their careers.

“It is increasingly the case that no matter what your educational background is, where you start has become increasingly important for where you end,” Carr told me. “The general amount of movement around the distribution has decreased by a statistically significant amount.”

or the conservative take from across the pond:

They find that none of these measures has changed much (see chart).

The study confirms previous findings that America’s social mobility is low compared with many European countries. (In Denmark, a poor child has twice as much chance of making it to the top quintile as in America.) But it challenges several smaller recent studies that concluded that America had become less socially mobile.

writting about a Harvard study.

Dream all you want, it's the stuff of progress - but keep your feet on the real ground.

originally posted by: rickymouse
You would have to take the higher exemption into consideration wouldn't you? I do not know if that is included in this chart.

Perhaps a republican lead joint committee is stupid enough not to factor in the higher personal deduction (I recall something about another error earlier in the year of an accounting error amounting to Billions) but one would hope it was.

You can see more at the direct link I posted in the OP for more information on methodology.

This bill is garbage, corporate America is drowning in money, they don't need any more and starving the government is going to destroy poor and a lot of middle class Americans too.