originally posted by: StallionDuck
Read your article. It says nothing about allowing "SERIOUS" mental illness.

From the USA Today article:


While bipolar disorder can be kept under control with medication, self-mutilation — where people slashing their skin with sharp instruments — may signal deeper mental health issues, according to the Diagnostic and Statistical Manual of Mental Health Disorders, which is published by the American Psychiatric Association.

What happens when the bipolars come off their meds? They may loose them, can't get them because of supply problems, or just decide that they're cured and don't need them anymore. And sometimes they just become less effective over time. God only knows how their dark side will react.

And the desire to do self-harm can resurface at any time. I don't care how much psychological reprogramming has been attempted, sometimes the only way to address certain states of mind is by redirecting the internal pain to external pain. Cutters don't always cut themselves, there are a lot of ways to do self-harm that are less visible, but just as dangerous, if not more so.

I don't completely understand the military's decision. I would hope there are safeguards in place to keep this from becoming a major problem in the event one of these recruits reverts to an unstable state.

My dad was a Drill Sergeant in the Army in the 70s and 80s. He didn't talk about it much growing up but now he'll tell some stories. I asked him how he dealt with the new recruits as kids that age are difficult to say the least. He said the worst were the gang members, and the mentally ill. Yes, a lot of kids that had nowhere else to go were shoved in the military. He said there were a lot of suicides then too. Not only were some of the recruits mentally ill, but so were some of the drill sergeants. He told me stories of some that got arrested for doing "stuff". Anyone that think there is abuse going on now, has no clue how bad it was in the 1970s. I mentioned the full metal jacket movie to my dad, he said it was much much worse.

DRAFTS are wrong and some should NOT be with those who can fight. 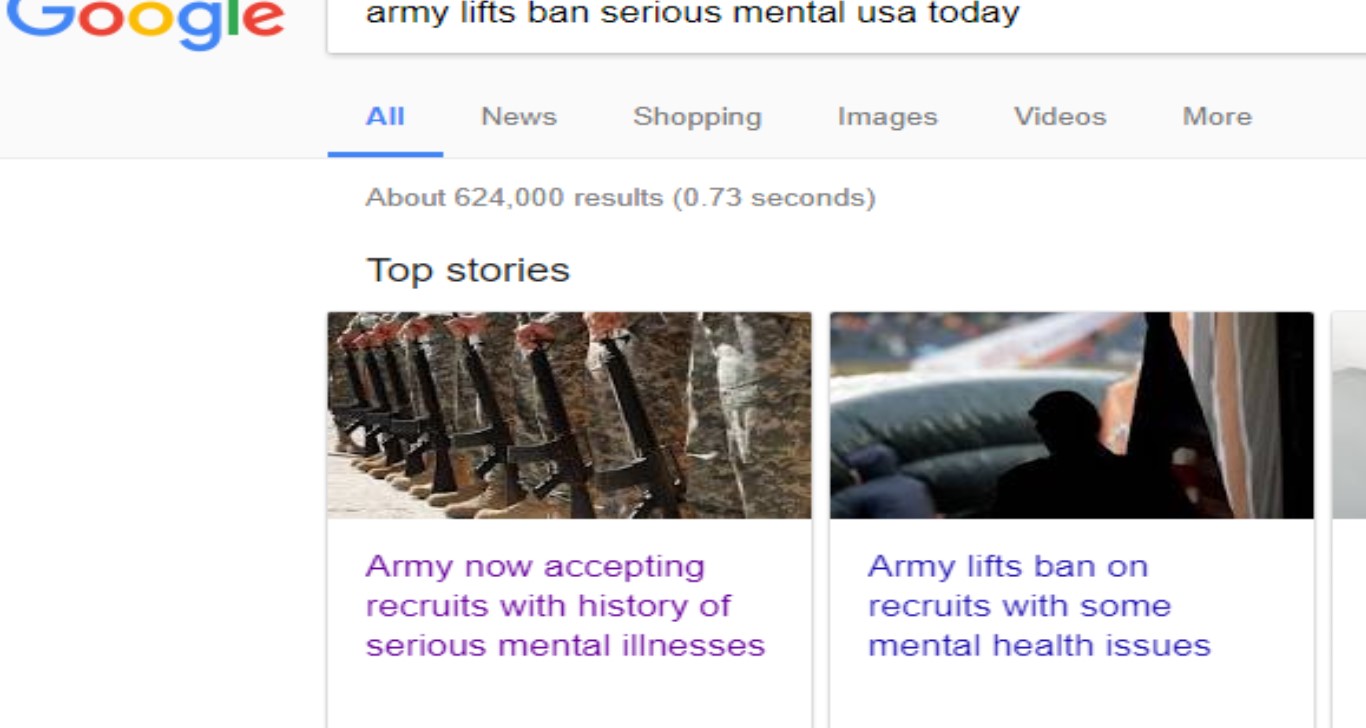 Now, are you done picking on the title?
Have anything useful to add like everyone else?
If not, please leave my thread alone.
edit on 13-11-2017 by ADAMandEVIL because: eta proof for this troglodyte

Now, are you done picking on the title?
Have anything useful to add like everyone else?
If not, please leave my thread alone.

It doesn't matter where you're from. I wasn't pointing out the "US" part. The clip you linked was titled different from the header you posted. The clip you're showing in your pic is NOT the same clip that you linked. That clip is 'click bait' because NO WHERE in the original article OR the link you provided did the clip say ANYTHING about 'SERIOUS' mental issues. It's states "SOME", not 'SERIOUS'. Click bait!

So in effect, you're doing the same thing that news clip did... Click bait!

If you post a thread to mislead, then I'll do what I've done because I have an interest in the topic. The ARMY isn't going to just throw someone in it doesn't scrutinize and evaluate. They wont just hand anyone a rifle. Do you really think the military wants this to come back and bite them in the behind? You have people in the military that have committed suicide and has gone rogue and killed others in and out of the military. Those people didn't have a record of mental illness so it happens. When they decided to go with "SOME", you can bet they will be evaluated well.

From personal experience, one of my dearest best friends, closest friend all the way from Highschool... She attempted suicide while she was in highschool and when she joined the Air Force, the first thing in our minds was.. Is the capable? We judged harshly just like many of you folks are doing. Today, she's a highly decorated RETIRED soldier. She had high level clearance and worked at NORAD for some time and during 9/11. She had mental health issues but apparently they weren't serious enough to keep her our of the Air Force and she did just fine.

Yeah she might have been one of the 'few' but so are the ones that do stupid stuff in or out of the military. I'm sure if she heard voices, she would have never been in the military. There are different levels of mental illness BEFORE and after militiary. Matter of fact, many come out with mental illnesses. One show does not fit all. You're saying it does and you're also calling it SERIOUS when it is in no way related to SERIOUS mental illnesses.

Finally... No... Free forum. I will not leave your thread alone. That's not how this works.


originally posted by: StallionDuck
Read your article. It says nothing about allowing "SERIOUS" mental illness.

That all depends on the level of their bi-polar. Don't you think if this was a real issue, bi-polar people all over the planet would have grabbed a gun and started mowing down the populace? Bi-Polar doesn't mean murderer. Do you even know what it means to be bi-polar? It doesn't mean one minute you're happy, the next minute you're dressed like a clown, ripping guts out of pigeons....

From 2008:
“Bipolar disorder affects approximately 5.7 million adult Americans, or about 2.6% of the U.S. population age 18 and older every year.” (National Institute of Mental Health).

If this was the case... don't you think there would be a blood bath ensuing every year from these people affected? You guys are acting like bi-polar people are out to murder everyone. It's not like that. I know bi-polar people. My X was one of them. I never woke up with a gun to my head... though sometimes I think she thought about it

That didn't bar them from trying to get me to sign the final papers, even when I told them I was anxious about weapons training and asked if I could opt out. They informed me I would have to undergo weapons training.

I was so worried about being around firearms if my condition flared that I told them last minute I couldn't go through with it.

I would have gone to boot camp at Fort Bragg (MWSAG*), but that's another CT theory in and of itself.

(*Men Who Stare At Goats)

edit on 11/13/17 by GENERAL EYES because: minor grammar edit

posted on Nov, 14 2017 @ 12:02 AM
link
you mean they haven`t already bee doing that? 22 years ago I lived next to a guy that was in the army and seriously mentally ill so I just always assumed that army would always take anyone they could get to volunteer.
in an all volunter miltary ,ina society that gets free government grants and guaranteed college loans it`s no surprise that the military will accept physcos and transgenders to fill the ranks.

maybe the military is thinking that war is on the horizon so lets recruit and put the mental defectives and trans genders in the first line of trenches to cleanse society of those rejects?

Perhaps they want them to go mad and kill people and when they've done their job, they might be disappeared themsevles.

This seems about as sensible as pushing ones genitals firmly and fearlessly into a bear trap. Repeatedly.

It was quite literally the first thing that came to mind, when trying to figure out how to best express the sheer stupidity of the idea of arming people with mental health problems such as those described, and sending them off into high stress environments, and expecting them to succeed in those environments.


It was quite literally the first thing that came to mind


You have a very disturbing mind!


But you have a way with words that invokes some interesting mental images. I've used a couple of your similes in a few of my posts. I make sure to always give you credit for them though; I don't want people to think that I'm that capable of such bizarre sadistic imagery.

Heh... if you think thats bad, you should check out Frankie Boyle, a Scots comedian.

That fellow is dark, with a capital D.