posted on Nov, 8 2017 @ 03:01 PM
link
I'm sure you know the pain of having to deal with the government. I'm trying to give them a change of address. That's it. I went to Service Canada and they told me they don't do what I need. I have to go through Revenue Canada. What? OK. I phoned them and was told to do it online. So I go to their website to set up an account I get through most of the process and one step requires me to CALL THEM BACK to get an email verification code. CRIPES. So I call them back, wait forever....again and finally get the code on my phone. I put the code in, the last step and hit "next". I can finally change my address. Nope. I get "This service is not available at this time. Try again later." 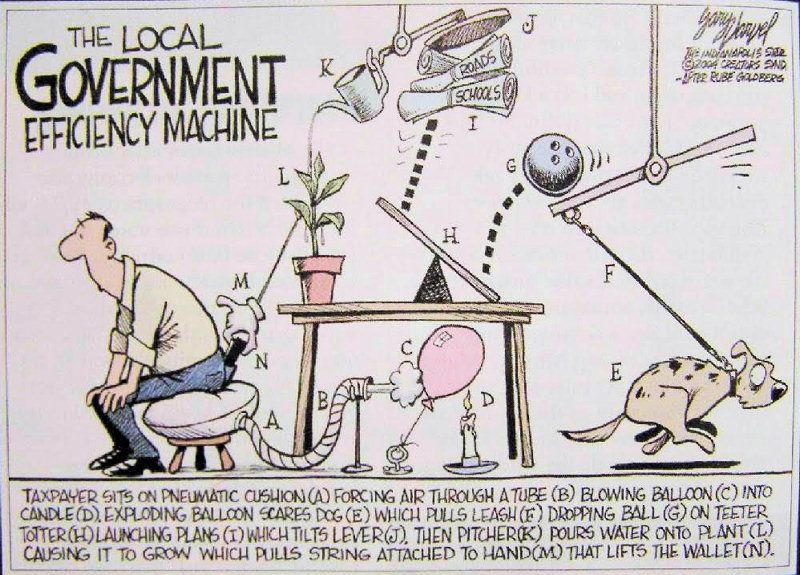 originally posted by: butcherguy
a reply to: intrepid

Down here, some of us are quite happy if the government can't find us.

I probably have mail going to more than 7 addresses hahaha. And when my phone dies I don't bother trying to save my old number either...

Seriously though, I'm sorry to see the beast of bureaucracy has become so vast in my Southern neighbor.

posted on Nov, 8 2017 @ 03:26 PM
link
I hear ya. Hubby called Canadian Revenue yesterday to get some copies of past T4 forms. All he could get was a recording telling him to call back later, that the system was too busy. Seems like every time we call for anything regarding CRS or Immigration, they're not available.

Pretty telling that a change of address for you comes via CRS. Gotta make sure they know where to find you to drain you dry of blood.

I have a friend who is a Tax Accountant. He charges up to $200.00/hour for his services.

He was doing a favor for one of his better clients and went to the Social Security office to get some paperwork. He got there about an hour before lunch and took a number. When it got to his turn, he was told by the government worker that they were going to lunch and they couldn't help him until they got back. And he was told he couldn't wait there because they close the office during lunch.

So, he leaves and gets back around 3:00PM. He takes a new number and sits there for the next two hours waiting to see someone. When it's finally his turn again, at about 5:00PM, he goes up to the counter and then he is told, by the same worker, that the office is now closing and he'll have to come back the next day.

He was not pleased to say the least. He lost potentially $600.00 worth of revenue, and still didn't get the paperwork he needed.

He was there the next morning standing first in line at the door when the office opened.

posted on Nov, 8 2017 @ 03:44 PM
link
I called the IRS yesterday about my taxes and the guy on the other end couldn't figure out what I needed to show them to have some back taxes released, so first he asked if I knew what he needed and then immediately after he said can you.... and hung up. WTF is wrong with these low level government employees? The top tier are so organized and active.

posted on Nov, 8 2017 @ 03:45 PM
link
Dont feel bad , it also online payment processors got #ing problems today . After dozen attempts to place one simple order and damn paypal giving unable to process payments at this time messages . Sent message to both paypal for #ing up and to the vender cancelling order as only damn payment option they offer is damn paypal .
Now I remember why I normally avoid damn paypal .

So it not just governments that are #ed up entire damn world is #ed up .

posted on Nov, 8 2017 @ 07:17 PM
link
Service Canada's website is a joke, I can confirm that. Same with trying to call them. Also, would it kill them to change the "hold" music? It's been that same damn song for years.

originally posted by: intrptr
a reply to: intrepid


They may still have a sense of humor in the Canadian government.

But, post-911, in the US if we tried something like that, we would get swatted by Homeland Security and disappeared to Guantanamo Bay.


originally posted by: intrptr
a reply to: intrepid


They may still have a sense of humor in the Canadian government.

But, post-911, in the US if we tried something like that, we would get swatted by Homeland Security and disappeared to Guantanamo Bay.


Because since 911 and the patriot act, any act of civil disobedience is 'Terrorism'.

The Matrix has you.

What you do is this.

You phone the government. You tell whomever picks up, that they are to make careful notes of everything you say. You explain the situation, you give your new address, and then you say to them:

"Having made, as you were instructed by a citizen, that is, one of the people paying your wages, careful note of my new address, YOU, a state employee, will now go through the process of getting my address changed on this system, and I will go and sip leisurely like at a tall glass of something cold and refreshing. Failure to comply will result in any fines I accumulate for failure to change details of my address with central government, being the responsibility of central government to pay. They can now fine themselves. Have a beautiful day."

When you go to file your taxes in March/April you can show your new address on your tax form.

I've never bothered to change addresses directly with the federal government, ever.

Just simply go to the post office and set up an address change with them... you can pay a small fee for the post office to redirect all of your mail for up to one full year (I think it's around $40-50). This way, any federal government mail will go to your new address via the post office until you file your tax return in a few months.

Revenue Canada will automatically change your address in their system from your tax return. No muss, no fuss.

No need to bother chasing down these idiots... it's just an exercise in futility more times than not.

I've actually done that. Unfortunately they won't forward government correspondence. Fortunately my old apartment is tenanted by my son so I still get it but have to wait until one of us gets to the other.

I admit it's been 10+ years since I've used any kind of post office mail forwarding so it's possible that may have changed, but any mail forwarding I've ever done in the past was never a problem for any mail, including any federal correspondence.

Either way, the address change will definitely happen once you file your tax returns with the new address on it.

That's about the one and only thing the gooberment doesn't screw up. Pfft.

posted on Nov, 9 2017 @ 02:32 PM
link
Believe it or not, the only solution I found to this was notifying them by good old fashioned snail mail. Moved many times in the last ten years and it works everytime.

ome taxpayers may be filing tax returns using erroneous information supplied by the Canada Revenue Agency, the federal auditor general warned Tuesday after tabling an audit that found just getting through to the department’s helplines is an even greater challenge than the government lets on.

Michael Ferguson’s latest report to Parliament said callers all too often get a busy signal or a message to hang up and try back later when they try to contact the taxman by telephone — and when they do get through, they’re not guaranteed of getting the right answers to their questions.

“When we called the call centres of the Canada Revenue Agency and we posed our questions, about 30% of the responses that we got back were not right,” Ferguson told a news conference — a “very concerning” finding that could be causing problems for Canadians who file their own returns.