Germany's preferred replacement for the Tornado

posted on Nov, 8 2017 @ 09:15 AM
link
Germany, Britain and France have been looking at replacing the Tornado strike fighter with a new platform. The bird has been getting long in the tooth, erm, talon, for some time now and will absolutely need to be replaced by 2030. The Brits have been dinking around with the French for a possible replacement based on a UCAV. The French and Germans signed an agreement to work on a 5th/6th gen fighter bomber as a replacement.

Then Germany asked for a briefing on the F-35.

Then the head of Airbus, quite recently, groused that Germany and France needed to hustle it if they wanted to get something built any time soon.

Then Germany dropped a bomb: their preferred replacement for the Tornado at this point is the F-35.

posted on Nov, 8 2017 @ 09:21 AM
link
The more the merrier. As I understand it, in general increasing the number produced will help drive down the cost. And with us and our allies using a common airframe will help keep the supply chain less complicated.

Germany? Eh, I mean the war was over 70 years ago. My favorite Merkel moment was last year when Trump was talking about the NATO allies needing to beef up their military and Merkel said something to the effect of "Are you sure you want us arming up?"

Germany? Eh, I mean the war was over 70 years ago. My favorite Merkel moment was last year when Trump was talking about the NATO allies needing to beef up their military and Merkel said something to the effect of "Are you sure you want us arming up?"

But really, if there would be any other Gen5/6-fighter available, I would probably prefer that. Because the special mixture in this aircraft for the needs of Marines/AirForce/etc is not really compatible to German military forces.
edit on 8 11 2017 by ManFromEurope because: (no reason given)


Germany? Eh, I mean the war was over 70 years ago. My favorite Merkel moment was last year when Trump was talking about the NATO allies needing to beef up their military and Merkel said something to the effect of "Are you sure you want us arming up?"

But really, if there would be any other Gen5/6-fighter available, I would probably prefer that. Because the special mixture in this aircraft for the needs of Marines/AirForce/etc is not really compatible to German military forces.


Is Germany allowed to build their own? Surely they must have seen the need coming.

Well, we tried in cooperation with other European countries - development is expensive, there should be jobs created all over Europe, it has to be a fighter for all of Europe. We called it the "Eurofighter 90".. We need another fighter, 'nuff said.

No, we did not develop a fighter in Germany on our own since WWII. I guess there are many good reasons to this.

Its not Germany who says this, its the Inspekteur der Luftwaffe (Chief of the Air Force) Karl Müllner. Big difference, the opinion of Luftwaffe leaders and the needs of the service matter little when it comes to aircraft procruement in Germany. Its just politics all the way.

But in any case, Lt. Gen. Karl Müllner made a couple of good points. This is based on German sources according to him;

- the Luftwaffe needs a Tornado replacement by the end of the next decade
- the Tornado will no longer be relevant in tomorrows threat environment and will become too costly to maintain
- there needs to be a political decision on how to move forward during the next two years and an Agreement not later than 2020
- the Luftwaffe is activley exploring not only the F-35 solution but is also looking at the F-15, F-18 and the Eurofighter as possible replacement candidates
- no decision has been made but according to him (and this is the really relevant part) the Luftwaffe thinks there is not enough time and money for a fighter development program

- the EW platform has to move Forward, Germany promised to provide NATO 14 'aircraft' by 2025. At least 20 planes are neccessary to fullfil this obligation
- no decision has been made and the Luftwaffe is looking at a couple of options like upgrading the Eurofighter, using the A400M as a platform or buy EA-18G Growler (just sayin, Growler for EW and Super Hornets Block III for the strike would be a prudent solution, seems like the Luftwaffe isnt talking about F-35 EW capabilities yet)
- he really thinks the Luftwaffe needs UCAVs, he'll continue to try to get a political decision on this

The guy is on the right track but as said, he doesnt decicde anythig. Germany is still trying to form a government after the Bundestag elections back in September, currently it looks like Merkel will form a coalition with the Greens (are rather pacifistic, anti military party, but complicated), dont expect any miracles any time soon.

Its a Jack of all Trades, right?

You can get a whole list of problems directly from the DoD here, and many people seem to think that only die-hards from the Marines might be proud of the F35, as they got their own toy to play with - many of the more suspicious "special effects" as I would call them like the VTO-ability and such are there only because the Marines "asked" for them specifically.

But I am not an aviation professional.

originally posted by: ManFromEurope
No, we did not develop a fighter in Germany on our own since WWII. I guess there are many good reasons to this.

The biggest issue is cost. If it were quick, cheap, and easy to develop a 4.5 or 5th generation jet, more countries would do so. I doubt that budget minded Germany will take on the time and expense needed. Plus the German military is in rough shape to begin with in terms of readiness and that money would be better spent elsewhere.

It makes much more sense IMHO for them in the short term to buy more Typhoons as they already operate the type, they are available now, and they have at least a 20% workshare in the venture

originally posted by: anzha The French and Germans signed an agreement to work on a 5th/6th gen fighter bomber as a replacement.

That's for a future replacement of the Typhoon (Germany) and Rafale (France). Germany are talking the replacement of Tornado, which is the immediate requirement. Other countries are replacing Tornado with F35, so this does seem a natural choice for Germany.

For the former replacement of Typhoon/Rafale there is already a discussion started by yours truly. www.abovetopsecret.com...

posted on Nov, 8 2017 @ 12:34 PM
link
As far as mention of the UK goes, there is no effort to develop a Tornado replacement. The project that did exist, FOAS, was cancelled years ago. The out of servic date of the Tornado with the RAF is firmly fixed for 2019. The Typhoon P3E enhancement programme is providing the full range of Tornado mission and weapons capabilities to take on the role and, of course, the F-35 is starting to come on stream and will go through a similar process by 2024.

That list is three years old. A lot has changed since then. They've resolved a number of those issues and the aircraft has improved significantly since FY14.

Wouldn't it be long in the beak?

And picking the F-35 would be cool. They'd be joining other nato countries who are also buying.

What's nice about the Tornado is the back seat for the ordinance delivery systems which are impressive. It's a two man job.

I actually got to sit in the cockpit of one. It was pretty impressive. They were going to Australia, and turned it into an around the world trip. We asked if we could pull a stand up and look at the cockpit, and the plane captain was like, "hop up and have a seat". Didn't have to tell me twice.


Maybe it's only one variant of the Tornado that has the back seat for the ordinance officer. Did you see that?

It was a great flight sim way back around 1990. I got close to mastering It. It was great at terrain following/masking.

You could even hide from radar using the terrain, then raise the nose relative to your target and launch a dumb bomb, on a gravity driven arc, then turn and dive back down.

I have to get back into simming with a fighter craft of some kind. It was a fun hobby.

Anyone have any recommendations for a highly realistic sim? 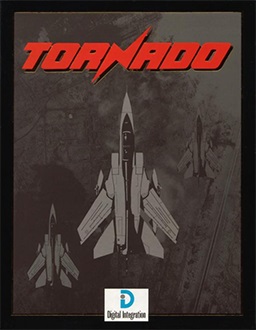 No this one did too. But at that age I was far more interested in the front seat. I did take a look at the back, and was rather impressed at the amount of work he had to do.

It's a brilliant concept, dividing the job in 2.

Any replacement should retain that, no matter how advanced the technology has become. Plus there's the 2 person multiplier ie: 2 can do the job of 4.

posted on Nov, 8 2017 @ 04:16 PM
link
I will be sorry to see these retired grown up with them in the sky from a little lad to a grizzled old fart, can recognize one easily without seeing it compared to other planes of it's ilk, when i was at school in the 80's my friends dad was ground crew for the Vulcan the RAF used to fly at displays so used to get invites to watch them fly her.....one time we were watching and a tornado came in for a touch and go....no wheels hit the ground but it was going like a bat out of hell along the runway 15 ft up , those guys run can run so close to the ground its unreal

I've settled on the Falcon BMS F-16 for my next flight sim hobby, about 25 years later..

Will need a gaming PC and one heck of a lot of free time to learn it.

It appears to be the best ever made. The BMS is a free massive community created add-on to Falcon 4.0.

Looks interesting.. no plans for VR yet... best to get ahead of the curve and come up to speed. It'll take a year.

Sorry for hijacking the thread about combat flight sim, but someone might find it to be of interest.

With it, you can plug into servers for real time complex campaigns and it has the best and most complex war campaign engine in the business.

Not for the faint of heart.

AnkhMorpork (will have to make that my callsign)