Barack Obama 'deliberately snubbed' by Chinese in chaotic arrival at G20: The US president was denied the usual red carpet welcome and forced to ‘go out of the ass’ of Air Force One, observers say

Clearly the Chinese want the Trump visit to go well.

It seems obvious that Trump displays more conviction in his rhetoric than Obama.

Well another way of looking at it is with the conflict with North Korea more importance is placed on the current meeting.
The Chinese had to deal with a gaggle of talking heads at the G20 with Obama so you can't really draw a parrallel.

ManFromEurope
+8 more
posted on Nov, 8 2017 @ 03:02 AM
link
Well, Obama was a rational man who disliked the dictatoric way of the Chinese government.

Huh? Obama's visit was only a year ago and you think NK wasn't a thing?

Moreover, from the 'snubbed' article in my OP, second paragraph:

Did you hurt yourself trying to make that distinction?

Seems like the Commies realise big shows and states of affair will suit the needs of those who get gratification from that sort of thing. Obama never really put much import on pomp or ceremony, observing its due but moving quickly onto business.

I wonder if Trump gets given a Royal 9 Holes at the Imperial. That would be worth taking note of with equal comparison, to myself at least.

2 Cents worth, give or take.

PS,
If I am bejing obtuse, I was referring to R9HI.
edit on 8-11-2017 by sunkuong because: clarification of classification

Which explains why Obama's team was so stoic about the snub.

I hope it was not anything to do with racism why the Chinese treated Obama so badly. I remember thinking at the time how disgusting their behavior was. Obama did not deserve that.

Trump is a China man. Wow, how many times did he use the word "China" during the election? It is the big investors' heaven there. They will eat that state up like locusts to cereal crops. Lucky it is so huge and will take a bit of time to ravage. Money is Trump's god. The human rights are of no significance and do not get in the way of his daily worship.

I hope Trump's business plans trickle down because he sure is making a lot of compromises in terms of ignoring human rights issues and pandering to a state that treats its citizens like robot slaves.

I would rather be STONE DEAD than have to live as a Chinese "worker". 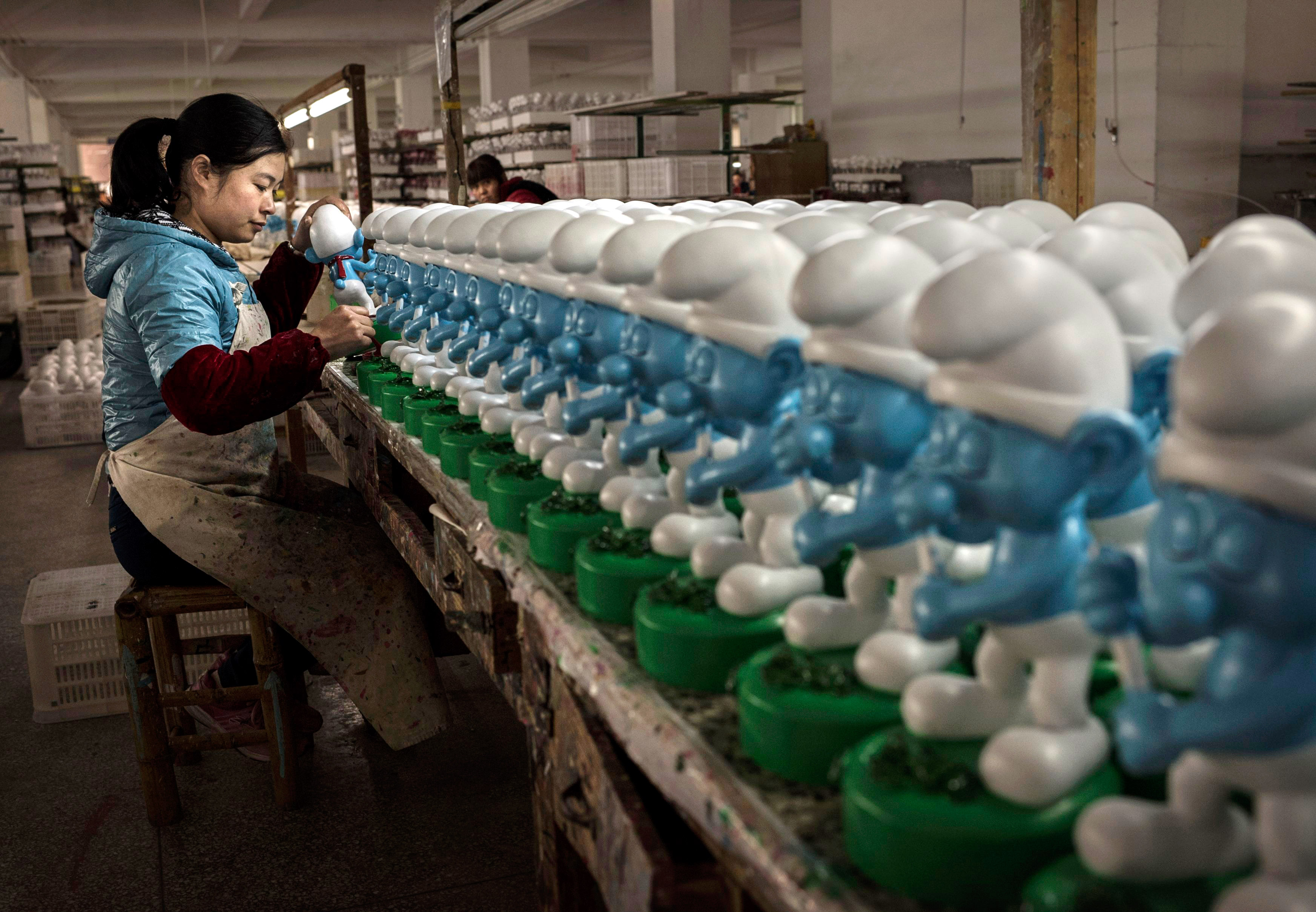 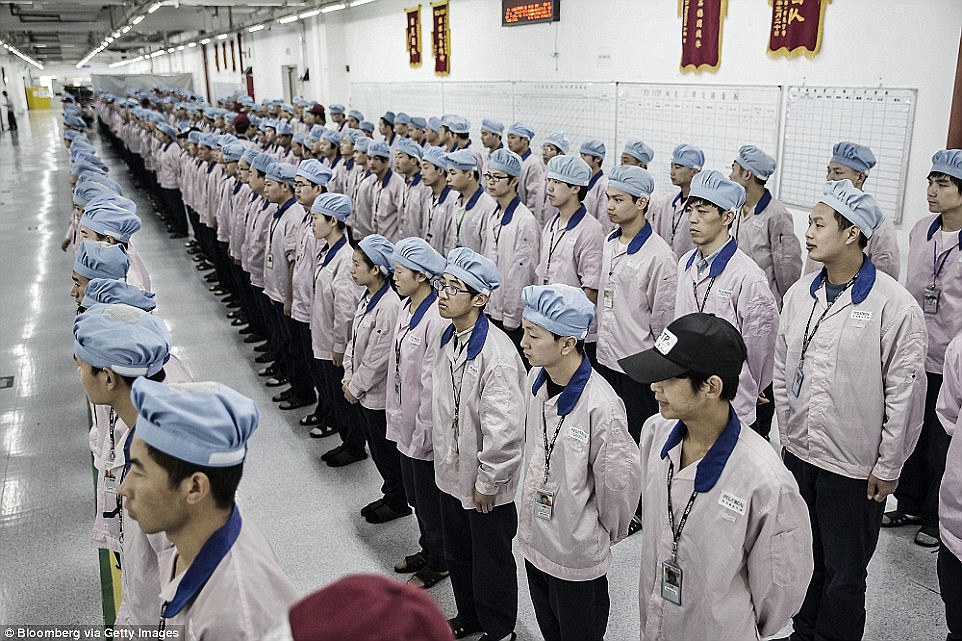 The sprawling factory compound, all grey dormitories and weather-beaten warehouses, blends seamlessly into the outskirts of the Shenzhen megalopolis. Foxconn’s enormous Longhua plant is a major manufacturer of Apple products. It might be the best-known factory in the world; it might also might be among the most secretive and sealed-off. Security guards man each of the entry points. Employees can’t get in without swiping an ID card; drivers entering with delivery trucks are subject to fingerprint scans. A Reuters journalist was once dragged out of a car and beaten for taking photos from outside the factory walls. The warning signs outside – “This factory area is legally established with state approval. Unauthorised trespassing is prohibited. Offenders will be sent to police for prosecution!” – are more aggressive than those outside many Chinese military compounds.

Yes, this is the suffering it takes so you guys can be zombies with iphones. Screw iphones. I would never own a piece of human rights violating contraption like that.

(Sorry, in a terrible mood today and feeling like being brutally honest).

I think you would be surprised to learn that I agree with much of your post, except the part about Trump being so pro China.

Do we even live in the same world???

It's clear he's simultaneously talked tough about China and most recently in advance of this trip extended his hand to them, effectively keeping them guessing while he presses US interests...like a good negotiator should.


Yeah, keep praising Trump (praise him, praise him) and you, too, will get to be a robot worker with zero rights and zero quality of life. Seriously, I would rather be dead than have to live like those guys.

I did tell you that they are all investing there did I not? They are making huge profits. ALL the biggest investors in the world are there. Politics is just rhetoric of pretense to satisfy the masses that they are for the people. You KNOW how often Trump spoke about China:

Is that tough talking, lol? They are on good terms BECAUSE of the business. China will starve without it and the world's investors will have to make do with two jets and yachts instead of eight. Win win for everybody except for a billion Chinese robot workers who must pay the human price of happy iphone world and of course the West's workers who will be FORCED to compete with..."China" so we, too, will have to be robot workers with lives as miserable. Already in the West it is new age Marxism in the work place. We can't behave as individuals, we can't talk about religion and must obey health and safety rules, be supervised, audited, et c. The organic work place is long gone.

"Productivity" they speak the word as if a wedding vow
Ahh but they were so much kinder then, they're more productive than that now.

originally posted by: Oldtimer2
a reply to: ManFromEurope

Well that was about the best response a true [description: person with absolutely no insight into diplomacy outside it's echo-chamber] could come up with, thank you.

Seems to be the basic Modus operandi here...

posted on Nov, 8 2017 @ 04:51 AM
link
I can tell you they are pulling out all the stops for Trump here now, very cool hope they can work out everything very soon.


Did you hurt yourself trying to make that distinction?

tsk tsk tsk...you don't think you're over reacting to my post? Chill

originally posted by: Timely
a reply to: loam

It seems obvious that Trump displays more conviction in his rhetoric than Obama.

As such .. the squeaky wheel gets the oil.
Much like Kim Il Sung, Kim Jong Un .

Sorry to say it does have to do with racism. I live here and see it often. Notice how China is "the friend of Africa" but no African leaders ever visit China? Hmmmm strange that.

There are 3 black college basketball players who just got accused in Hangzhou of shoplifting... why? Because they were black foreigners and everyone in Chinese knows black people are thieves. Thankfully the mostly useless police in this case questioned the athletes and found they were not involved with the incident.

originally posted by: TheConstruKctionofLight
a reply to: loam

Well another way of looking at it is with the conflict with North Korea more importance is placed on the current meeting.
The Chinese had to deal with a gaggle of talking heads at the G20 with Obama so you can't really draw a parrallel.

But either or, they can use 14 minutes of runway and tarmac hand shaking footage as good background for the propaganda spewing from the panel of news 'casters' mouths.