"I heard from a relative in Kilju that deformed babies were born in hospitals there," one defector said. Another said people in Kilju drink water that comes down from Mt. Mantap in Punggye-ri, where the nuclear test site is located, and they are worried about contamination from radiation.


Suh Kyun-ryul, a professor of nuclear engineering at Seoul National University, said, "Due to the collapsed ground layer, fissures must have formed underneath, leading to contamination of the underground layer and water supply."

Officials are trying hard to prevent accounts from inside Kilju spreading to other parts of the North. One said, "People who boarded trains to the border with samples of soil, water and leaves from Kilju county were arrested an

Another defector who used to work as a forestry official in Kilju said, "If you plant trees in the mountains there, 80 percent of them die. You can blame it on poor planting, but the number of trees that die is higher than in other mountains."


What do you think ATS? A propaganda piece by the media or a crisis that is seriously damaging the region? 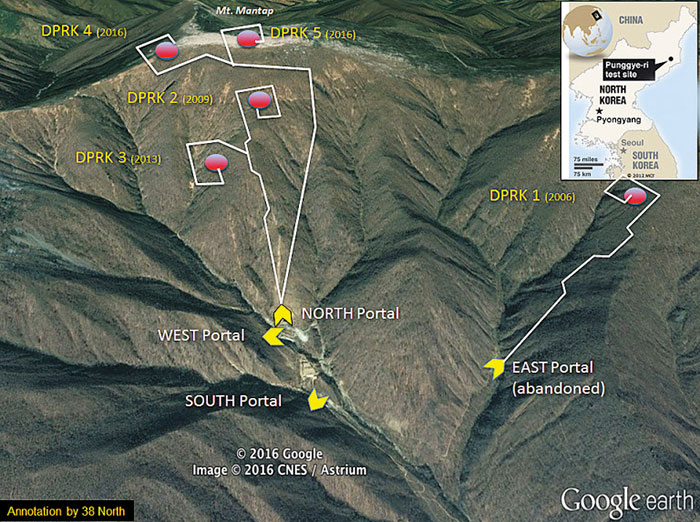 posted on Nov, 7 2017 @ 08:02 PM
link
I'd say (at the risk of sounding stupid) that due to the amount of test carried out at that site and the ever increasing payloads. It would be a given that this will be happening. 100%

If they are unable to get the samples out of the country for testing then there's no way to know for sure how contaminated it is.

The US had a contaminated nuclear test site it didn't even tell the public about for 20 years, so why can't N. Korea have contaminated test sites too? It's certainly possible.


Any way you cut it, the situation at the Santa Susana Field Laboratory site outside Simi Valley is a mess.

The 2,850-acre former rocket engine test center is contaminated by a vast menu of radioactive isotopes and toxic chemicals. The condition of its soil, groundwater and structures makes it one of the most challenging cleanup jobs in the state, possibly the country.

Until 2006, the site was operated by private corporations for federal agencies — chiefly NASA. The problems there began in 1959, when a nuclear reactor partially melted down, contaminating portions of the hilltop facility and spewing radioactive gases into the atmosphere. That incident wasn't publicly disclosed until 1979. By then, more mishaps had followed, including reactor accidents in 1964 and 1969. The worst contamination is thought to be in a parcel known as Area IV, where the meltdown occurred.


Last I heard they were still trying to clean it up though the cleanup was previously impeded by legal wrangling and politics, so I don't know the latest progress, but I was surprised there was no public announcement of this partial meltdown in 1959 until 1979 and that cleanup is still going on, it was apparently quite a mess and there's a lot of population around that site.

originally posted by: CaptainBeno
due to the amount of test carried out at that site and the ever increasing payloads. It would be a given that this will be happening. 100%

Absolutely, and this should serve as definite proof that North Korea can not be trusted with nuclear weapons or materials. Nuclear technology goes beyond national defense, because when there is a nuclear disaster, there's no telling what devastation can occur. Regardless of whether or not North Korea has the right to defend itself, it does not have the right to destroy and essentially permanently contaminate the environment with radioactive material. Look at Japan, a modern country with modern technology, and they themselves suffered a critical nuclear failure with their Fukushima nuclear plant, which is still leaking radiation 6 years later. You think North Korea would be able to handle a nuclear disaster? No, North Korea with nuclear technology is a nightmare waiting to happen.

Plenty of places in the uS and Pacific contaminated far worse than lil Korea.

But go ahead ding-ding, sound the evil dictator with WMD alarm to justify bullying yet another little hapless nation.

Right...But they DO have nuclear weapons. And they ARE irresponsible with them as evidenced by their actions and rhetoric...So.

Bully? Sometimes a dude just needs to be put in his place.

Could be false (the zealous affirmations of recent defectors seeking to ingratiate themselves with their new protectors).

Could be a sensationalized version of both truth and falsehood.

Which could be conveniently being made public to try to pressure China, through public shaming, into taking a more pro-active stance against NK, and further nuclear testing, in the name of preventing radioactive contamination.

China is already concerned, and has expressed that concern. This testimony could be referenced by the Chinese government, in the public forum, to justify the actions they have decided on in private.

The news reports are 100% accurate. What's even WORSE is that Japan says radioactive dust is blowing into that country from North Korea. (The winter winds prevail from that direction)

I think Japanese President ABE told President Trump this week that he'd like a big North Korea invasion by Japan/USA/SK/Aus..and others.

Bully? Sometimes a dude just needs to be put in his place.


You mean put in 'your' place. Thats bully talk, blaming the victim. Bullies justify their behavior by saying, "Look what you made me do to you".

Thats why America is waging war round the globe. Because it makes its victims responsible for what they made the bully do.

Mind meld isn't working, America is the one 'making' war on nations, not the other way around.
edit on 8-11-2017 by intrptr because: change

originally posted by: CaptainBeno
I'd say (at the risk of sounding stupid) that due to the amount of test carried out at that site and the ever increasing payloads. It would be a given that this will be happening. 100%


Add to that the quick pace of the tests which makes me wonder if they cut corners to get the job done. It wouldn't surprise me at all if there small accidents or just sloppy containment practices. Whatever nation helped them get this far probably forgot to mention the downsides to nuke testing.

There is no way they could be testing nuclear weapons on an area, and NOT have contamination of some sort. It comes with the package. Detonate nuclear weapons somewhere, and that somewhere, assuming it is on or under the ground, as opposed to in space, or in the atmosphere, and that location is going to be hotter than a Megadeth riff in no time flat, and remain that way for some considerable time.

As to corners being cut, as suggested by one poster at least on this thread, that is, as far as we can tell at this point, exactly what is happening. Apparently there was a tunnel collapse in one of the facilities being used to house and produce nuclear weapons, which killed a bunch of workers. Chances are that unacceptable building codes, improper or inadequate safety precautions with regard to vibration and resonance and what have you, combined to produce this collapse. I cannot remember whether I heard about that here or elsewhere, but I only heard about this relatively recently.