Is Chelsea Handler A Complete Moron For Saying This About The Texas Church Shooting?


An estimated 27 people have been murdered with 30 more wounded at a church shooting in Sutherland Springs. Within hours of the shooting, Chelsea Handler took to Twitter to say that the shooting happened because of "republicans." 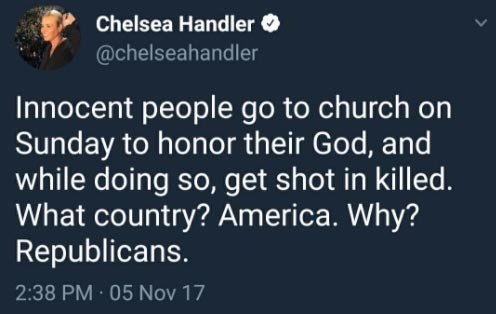 www.themaven.net... USUkA?full=1
That's one disgusting comment coming from a woman who said:


For Handler—who last month revealed she is ending her eponymous Netflix talk show to pursue political activism—the exchange is proof of what women can achieve when they show up for each other.

"We have to get better at being there for each other," explains the comedian, who chose to focus on female friendship for her BAZAAR.com Women Who Dare video shoot. "You don't have to be best friends with women you don't like, but you do have to be a sister to them."


www.harpersbazaar.com...
What a stupid hypocrite. She certainly would not be a "sister" to a Republican woman....and no Republican woman, with half a brain, would want this ditz to be her sister either.

Anyone who brags about having 2 abortions in 1 year is sh# in my book.

Edit: I'm pro choice btw. There are limits though.
edit on 5-11-2017 by Autorico because: added stuffs

She was a complete moron BEFORE she said this.

This happened under the democrats and it will happen after the republicans are gone.


Chelsea Handler would be famous, if she could invent beer goggles that would make an Alpha male want to go home with her at Last Call!

She was a complete moron BEFORE she said this.

You forgot the word pig.

Well Hollyweird needs to go the way of the Dodo.

I think the Kardashians have her beat in that department.

Sigh, don't even get me started on them...

edit: such wonderful role models ladies have in this day and age.
edit on 5-11-2017 by Autorico because: (no reason given)

originally posted by: Autorico
a reply to: Vector99


Ehh figures, another D-list wanna be celeb saying outrageous sh#t for their 15 minutes of relevance.