Mark Lombardi (March 23, 1951 – March 22, 2000) was an American neo-conceptual artist who specialized in drawings that document alleged financial and political frauds by power brokers, and in general "the uses and abuses of power".

Oddly, one of his last drawings was titled "Bill Clinton, the Lippo Group, and Jackson Stephens of Little Rock, Arkansas"

It was also considered very odd timing by many for his suicide as he was on the verge of becoming big.

The reason for my title...the Lippo Group was heavily connected with the Clintons and Podestas and Stephens...showing a very long trail of corruption dating way back into the early years of Clinton Corruption.

Not great resolution but this is the one I am talking about. 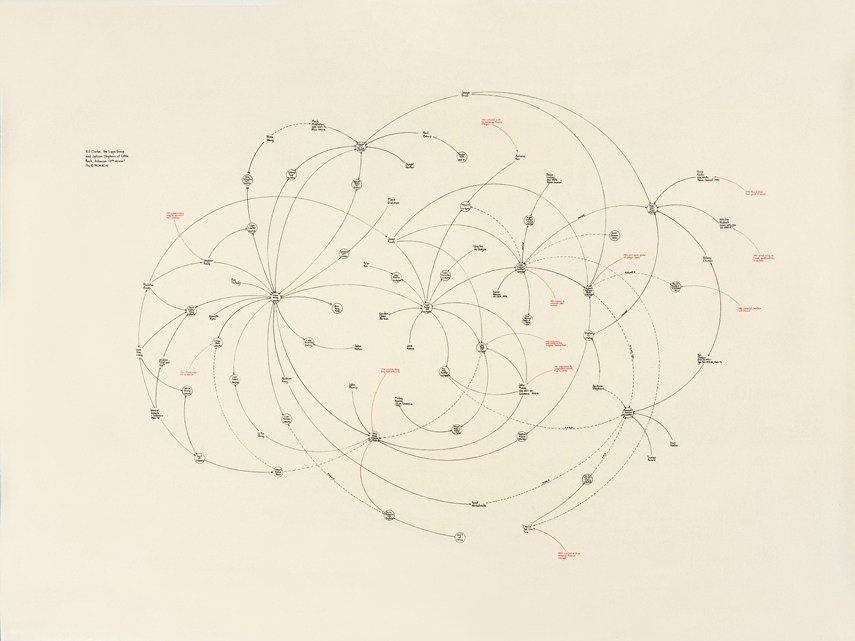 Very interesting guy and really interesting way to conceptualize connections way ahead of its time.
edit on 11/5/17 by Vasa Croe because: (no reason given)

All of his work is very interesting and has plenty of connections that likely go unnoticed by many. He was a major researcher of political scandal.

Six years before his death, Lombardi switched to link analysis pencil diagrams of crime and conspiracy networks that he would become best known for. In the early 1990s, he began researching the many scandals of the time, including the BCCI scandal, the Harken Energy scandal, and the Savings and Loan scandal. The thousands of index cards that he accumulated in the course of this research began to overwhelm his ability to deal with them, and to cope, Mark began assembling them into physical outlines, and then into hand-written diagrams. These were intended to be a tool, to provide focus to his work, but he "...soon decided that this method of combining text and image in a single field (called a drawing, diagram or flow chart, whichever you prefer) really worked for me in other ways as well." This decision was spurred, according to Lombardi, while he was talking with a friend about one of the participants in the Iran–Contra scandal, Adnan Khashoggi. Regarding this conversation, Lombardi wrote "I began taking notes, then sketching out a simple tree chart, showing the breakdown of Khashoggi's American holdings. Within days, I began making more of these charts, depicting other corporate networks I had researched. I was writing several pieces at the time and found the charts a useful, quick reference to the material at hand."

Can't wait to dive in and see what comes out of this. I recall seeing these drawings quite some time back, will try and see what I can ferret out and bring back any interesting bits.

This is quite fascinating!

What a brilliant artist this man was, to put these pieces together, wish I was able to see them fully but I can not from this computer.

His work appears to have gotten to the heart of some of the more notorious families in our political realm, it is no surprise that he was "suicided".

posted on Nov, 5 2017 @ 05:18 PM
link
Very interesting! It's too bad that a site hosting the works of an artist can't do so in hi-res. The work can't be fully appreciated if it can't be interpreted.

originally posted by: the2ofusr1
a reply to: Vasa Croe

originally posted by: LogicalGraphitti
Very interesting! It's too bad that a site hosting the works of an artist can't do so in hi-res. The work can't be fully appreciated if it can't be interpreted.

Pretty sure it is so nobody can copy and print it as he was an artist and his work sells for quite a bit now.