The Trump Organization has won the permission to hire 70 foreign workers to serve as maids, cooks and servers for the 2017-2018 tourist season, according to data from the U.S. Labor Department.

The Palm Beach Post reported Friday that Trump's Mar-a-Lago resort in Palm Beach, Fla., won the permission after first applying for the H-2B visas in July. The request was originally filed during Trump's "Made In America" week at the White House.

Palm Beach's unemployment rate currently sits at 3.6 percent. A local job placement agency told the Post that there are plenty of local workers who would be eager to fill the positions.

Plenty of Americans could have filled those positions, clearly. What happen to Trump's campaign talk in 2016? All the blame on foreigners taking jobs? He even targeted the H-2B Visa in his campaign I believe. Now all of a sudden it's do as I say, not as I do. 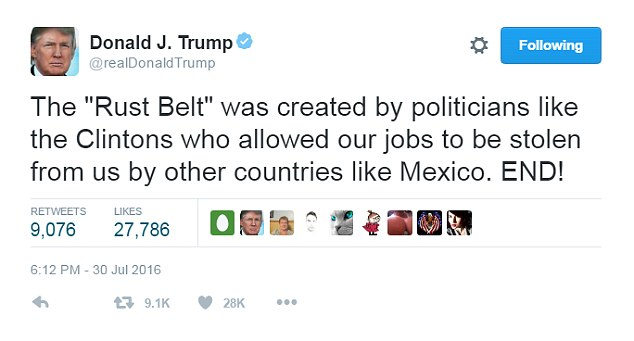 Now who knows, maybe Trump had no control in the decision of the resort? He seems to be the Kingmaker there. I can't seem to find any reasonable explanation for this other than he's an utter hypocrite. This isn't the first time one of his businesses was caught out pushing for more foreign workers and it certainly won't be the last.

He hires visa workers because he made America so great again so fast that everyone has a job and nobody wants to work at Mar-a-lago. Also, the media. I blame Obama.

And blame Clinton. And Benghazi. And fake media. And the Deep State. And. And. And.

I'm going to guess Trump likes foreign workers because they're easier to control, underpay, manipulate and take advantage of.

And if they complain? He can just ship them out of the USA.

You just don't understand, Trump only wants the crème de la crème of people coming to our country. And by that, I mean women who marry Donald Trump and people who will do service jobs at Trump properties.

That, and no one in Palm Beach likely wanted to work for Trump. It's not surprising he had to import the help from outside the USA...the locals know better!

posted on Nov, 5 2017 @ 12:38 AM
link
This just cannot be true. I refuse to believe it. All the marbles in my brain have quit running around and lay still at the bottom of my skull. This cannot be true.

hey, at least Huckabee will have a perfectly, sane, and logical explanation for the visas. and Huckabee would never lie to protect the trumpster.

thanks Bush and Bush Sr.

posted on Nov, 5 2017 @ 12:42 AM
link
Just like healthcare, those that voted for Putin's Puppet are going to be the most adversely affected by his lies.

I can't seem to find any reasonable explanation for this other than he's an utter hypocrite.


A lesson here for you SG.. never forget that one mans reasonable explanation is another mans punch line for the joke''how stupid can you be''

He hires visa workers because he made America so great again so fast that everyone has a job and nobody wants to work at Mar-a-lago. Also, the media. I blame Obama.

Wow! Look at all the jobs Obama created...lol

That's how he's done things his whole life. Just look through his past and that's him. You can't trust anything he says from moment to the next. Sometimes he might be right, other times way wrong but to him he's always correct. Which means you can't rely on him to tell the truth or to lie about anything. Nor does he care if he lies about anything. It doesn't change anything in his mind.

He's a huge hypocrite and everyone knows it. His supporters know it too they just don't care or choose to act like they don't see it even when it's right in front of them because they bought into the whole thing so they're stuck and still think they can get something of value out of it if they just hold on long enough.

There aren't that many Trump Supporters actually though. But there are enough of them and they are so uncompromising that they actually make a solid front. Especially against the rest who are all divided. It could all stop real quick if the division wasn't so big and some reason took hold.

Pretty much. These people keep voting against their own interests, and blame Democrats/liberals when they end up suffering for it.

It gets old being the adults in the room sometimes, but who else is going to continue to clean up the messes every few elections?

That's another thing. Trump isn't so much of the problem starter but an opportunist who has taken advantage of decades of poor and corrupt policy and neglect to our society. Our populace in general isn't smart. We've created a big dumb superstitious and damaged society in general.

But he didn't do that so much as he just took advantage of it at the right time. With a lot of help, let's not forget that. He's certainly not the brains behind his coming to power by any means. But he does play his part very well at the same time.

But he panders to a very simple kind of thinking and that is how most people think. They don't want to be trained in innovative new tech. They want their coal job back. They don't care to understand the complex nature of diplomacy. They just want to blow up the bad guy cause we're number #1. Yay Merica!! He talks that language extremely well.

Oh right there with you, I'm so disgusted with their ignorance that I'm beyond caring anymore.
But you have to remember these are the types of idiots that think rigging their diesels to spew smog on demand to piss people off is "fun".

He doesn't run his businesses anymore and you KNOW this because you made such a big deal about him not controlling his business interests while being the POTUS.

Trump had ZERO to do with this decision.

Exactly. Which any reasonable person would think is the opposite since most of them enjoy hunting and fishing and drinking beer outside while BarBQing and having tailgate parties. You would think they would give a damn about the quality of that nature they allegedly love so much.

But they also poach the animals for fun. Pollute the air with modified trucks to piss off some tree huggers for wanting a clean and thriving natural world. It's just stupid for the sake of being stupid.

Even worse is when you try to walk them through some basic logic of how their actions are against their own interests but they're too dumb and stubborn to even get it. Some of them are too dumb to know they're dumb and you can't get through to them because of that. It requires a certain amount of intelligence to even have an educated conversation.

Then you have the ones who aren't dumb at all but just like acting that way to piss others off. They might be worse because they do know better but do so anyway in spite of that.

He still profits from his businesses, he still owns them. He's offloaded the daily control to his Sons which you know full well would stand there and sh*t in their pants if Daddy said they aren't allowed to leave the room to go to the bathroom.

He's not bothering with the day to day management but I doubt he did that anyway. But he's in control of them alright. He knows what's happening with them because they're still his completely. He didn't divest anything he just resigned his position but you think that matters much when it's still Trump Inc. and his minion sons are watching the place till daddy get's home??? Come on....

Exactly. Which any reasonable person would think is the opposite since most of them enjoy hunting and fishing and drinking beer outside while BarBQing and having tailgate parties. You would think they would give a damn about the quality of that nature they allegedly love so much.

Meh all they need is mud, & roadkill will do, they're simple creatures.