originally posted by: sean
I don't see how that trajectory is possible because the lit sign on the furthest right is closer then the second and the red light pylon being the furthest.


Well, that trajectory is what the video shows.

I could find the two signs but not the red light, so I don't know if it's closer or farther away.

It seems it had to turn a right angle there just after coming between the red light and the second lit sign. It's like it is running ground level and parallel to the road coming back towards the bend of the highway there and going the opposite direction of the traffic flow.


That's the problem of lack of references, we may be looking at something closer to the camera or far away, the only thing we know is that the object was not farther away than the horizon.

could you tell me why?
is it the illumination?

No, it's the movement.

We see the object for 3 seconds, and in that time a bat would make several changes of direction, a bird would flap its wings a few times, unless it was a soaring bird, but that would mean a bird with large wings, capable of giving enough lift, and that would be visible. A bug would flap its wings many times in 3 seconds. Neither of the above animals emit their own light, so the light we see must be reflected light, so it should change according to the changes resulting from the wings flapping.

Also, the speed is one of the things that makes me think this is not a bug, as a bug would have to be very close to the camera and I don't think it would take 3 seconds to cross that section of the screen, it would take less time.

I'm not an expert on how UFOs fly, I never saw one.

well i had some sightings, but they were disapointing of the "lights in the sky" sort

A reflection of what?


Look at the background, the 'smear' of light and the 'soft' focus of lights. Imo, this is a pane of glass the camera is recording thru. Again Imo, the 'thingy' is a reflection of the object (whatever it is) moving in the room behind the camera.

OK, I understand it now, but to me it looks like the camera is on a kind of balcony, and if it's (like it looks) an outdoors camera, it may be inside a cupola or something like that, as they usually are, and that would explain the "smear" and the "soft focus".

Doesn't look like a meteor, really, and if it was, there would have been an impact, surely, with it seeming to be that low.

Most curious. Fast, whatever it was, too! Nice find. Not sure what to think on this one. Legit "UFO", by strictest definition!!

Nice catch. Hadn't slowed it down yet, but it's clear it does turn, and land, so has to be a plane.

There are no airfields on that area.

There are no airfields on that area.


Close enough. Hounddog suggests it on page two. Approach pattern takes aircraft by the casino... the camera records the reflection off the smudgy glass, giving the appearance of an object in front of the lens.

I'm going one further and scolding the M&M news outlet for vetting a known phenomenon there, cutting off the tidbit video before we see what happens to the light and pretending with their 'experts' analysis they don't know what it is.

shaewnee reg airport is 8 miles from the casino by rd the closet route.


But it does not move like a bird, does it?

I work in Port Melbourne, I have a view of a Bridge that has large spot lights that shine up into the sky.

Seagulls and others white birds when flying in the area are attracted by the lights, they group up and fly around above the bridge, the light makes them glow and flicker and if flying a fairly straight trajectory look exactly like this.

originally posted by: intrptr
Close enough. Hounddog suggests it on page two. Approach pattern takes aircraft by the casino... the camera records the reflection off the smudgy glass, giving the appearance of an object in front of the lens.


If you saw my post on page 3 you could see that I think that the map posted on page 2 is not of the area we see on the video, as the camera is pointing in the opposite direction.

Also, if it's a reflection of an aeroplane landing and moving away from the camera, why do we see a fixed white light and no navigation lights?


I don't go that far, but the explanation and the experts used make doubt their intentions to clear things up.

Do you think that camera has a lens good enough to show something at that distance, and in the opposite direction?

If my interpretation of the location is correct, the farthest of the two illuminated billboards to the right of the road is only 2 km away from the camera.

the casino is best i tell 13 stories tall, looking at pictures of it. you can see with the naked eye 13 miles from 130 up.i say a camera is just as good as the naked eye in that aspect
also if you watch the video at 1/4 speed at the 7 sec mark you can see it appears to land behind the furthest what you called road sign and came back past the closest and then turned right.


ETA: if you watch really close in full screen at 1/4 speed,you can see the thing moving in flight and sometimes it appears to be banking.to the right and in order to land behind the furthest "sign" and come back toward the casino it would have to have turned some where in flight.
edit on 7-11-2017 by hounddoghowlie because: (no reason given)

posted on Nov, 7 2017 @ 08:48 AM
link
Doubt it's an aircraft - if aircraft routinely flew past that area, and past that non-moving camera, we'd see this anomaly all the time. There would be a ton of "UFO during newscast!" videos out there for this station and that camera. Also going much too fast.. this is not slowed down footage, the car closest to the camera in the parking lot would be creeping at 2 MPH if that were the case. Think this is normal speed, and that's much too fast for an aircraft.

So either an animal, or a meteorite I'd guess. Doubt an animal - as ArMap pointed out, you'd see wings. In every blurry, even tiny blip footage (typically on night vision), I can always see the wing flap. It's obvious, and completely absent here. Just doesn't seem like a animal or bug.

So a meteorite I suppose.. although it's not green or anything weird, like normally you'd associate with it. But regardless of what it might be, I think it's mundane.. I don't think it's a tiny alien coming in for a landing. : )

posted on Nov, 7 2017 @ 09:44 AM
link
here are some screen shots taken from the 6 sec frames. these very well could be tail and wing tip lights that you can clearly see if played at 1/4 speed and full screen. you can tell that they are not connected to the main body of light.

if you blow them up before they become pixelated, you can see them better. 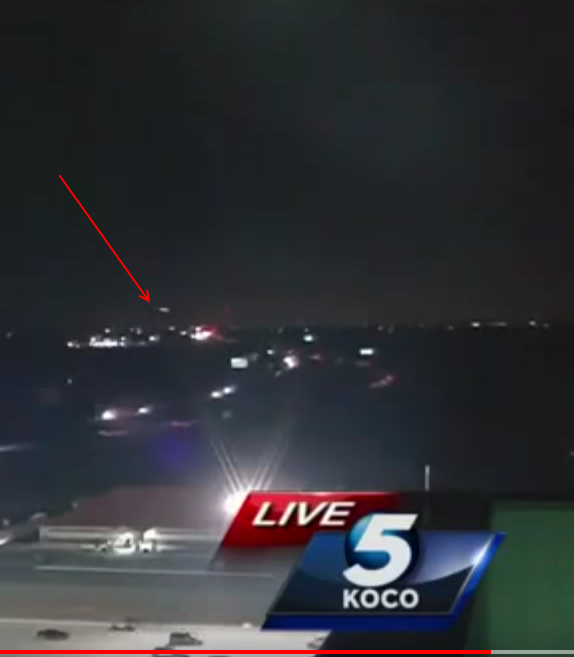 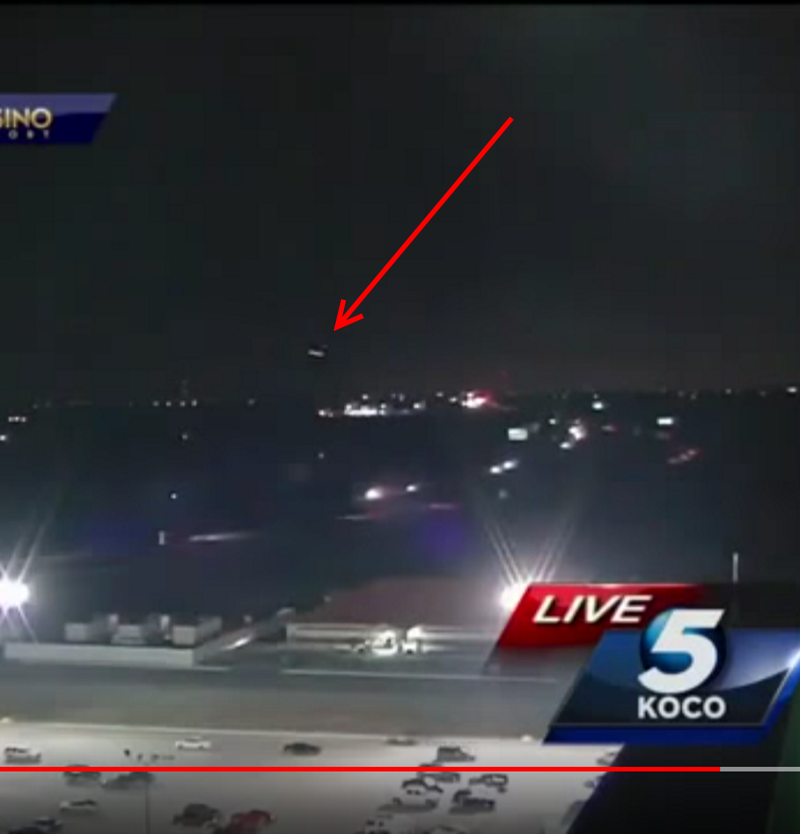 also if you watch it very carefully i swear you can see the one blink near the end of the main body a couple of times before it lands. you might have to play over a few time to see it.

Is this possibly a reflective light on the camera lens? Just a happen chance glare that reflected off the lens? It does not seem to be a solid object.


originally posted by: intrptr
Close enough. Hounddog suggests it on page two. Approach pattern takes aircraft by the casino... the camera records the reflection off the smudgy glass, giving the appearance of an object in front of the lens.


If you saw my post on page 3 you could see that I think that the map posted on page 2 is not of the area we see on the video, as the camera is pointing in the opposite direction.

Also, if it's a reflection of an aeroplane landing and moving away from the camera, why do we see a fixed white light and no navigation lights?


I don't go that far, but the explanation and the experts used make doubt their intentions to clear things up. 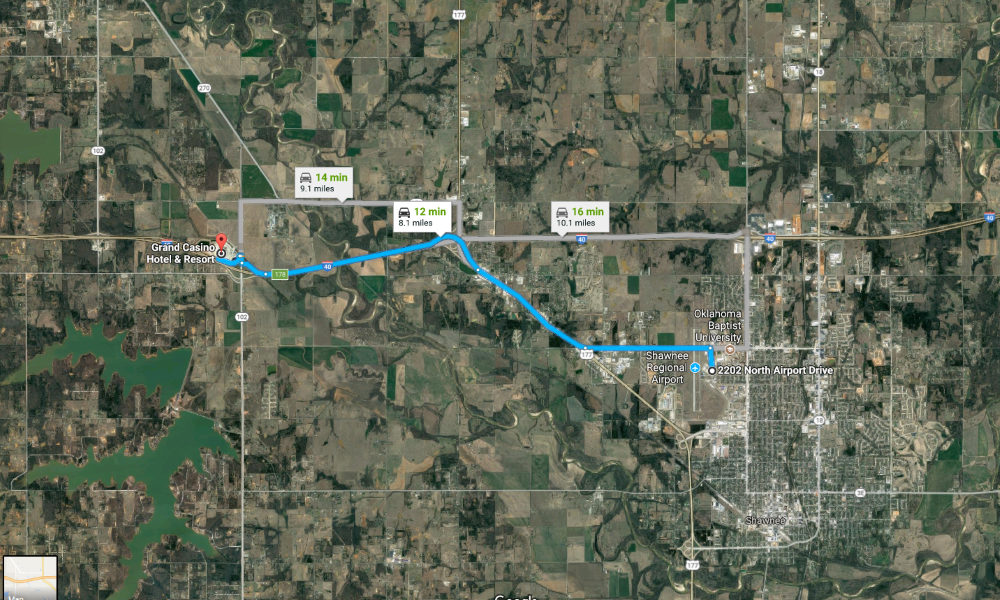 That is the casino on the left and Shawanee on the right. I see he's also since added a screenshot from the OP video showing a 'double light' source^^^.

Edit: Oh yah, I reviewed your post too, you found the buildings in camera view, I saw that too on Google map because of your work...
edit on 7-11-2017 by intrptr because: Edit: