....from the angle it was traveling at and seeing as went below the horizon into the mass of buildings AND there was no explosion it was ????

Who knows, who cares.... it's for the intellectuals and armchair scientists amongst us to figure out. Me, I'm having east Indian food for supper tonight.

Yes I believe it is a bug.

posted on Nov, 5 2017 @ 04:02 PM
link
Woah. Unless there was a pane of glass reflecting a fast-moving object... but still, yeah. Could be a hoax. How many versions of this video posted I wonder?

> I build and fly race drones < They are around 220mm to 250mm in size, and can go 90Mph. Seeing that there is an adjacent parking lot RIGHT there. IT would make sense that someone in the hobby, that wanted to fly at night. Would do it there.

My latest build can go over a mile away and reach speeds of 90Mph..

I recorded this about 2 weeks ago ^ to give you an idea of how agile and quick they are.

no clue what it is but CGI can be placed into live feed so your argument of it can't be CGI because live is pointless. i mean look at snap chat filters lol, that is live feed CGI right there.

It doesn't slow down, the film is poor quality and choppy.

Edit: as pointed out this was a documented meteor.

People will believe whatever they want though.
edit on 5-11-2017 by raymundoko because: (no reason given)

originally posted by: beetee
a reply to: GBP/JPY

How do you arrive at the conclusion that it is much closer to the camera?

I don't see any evidence supporting this.

Also, the straight trajectory at that speed does not look like a bug or a bird to me. Right at the end of the clip, as the picture fades, you can actually see it changing its trajectory sligtly upward.

I think this is very puzzling.

ETA: The change in trajectory happens at about 8 seconds, right before it goes out.


hi....we pilots see with the peripheral when timing the round out and flare for judging the runway

you're right now....I only see it the first 2 tenths of a second....as if it's already up to speed and just passing by dodging that 1000 watt HID light

i guess we have to give up on the odd shape.....unless it's a cecada locust

originally posted by: Bullshark012
Replay the video over and over...watching closely as it passes Behind the building with the blinking red light.


It doesn't pass behind whatever has the red light, as you can see in the sum of all the frames below. 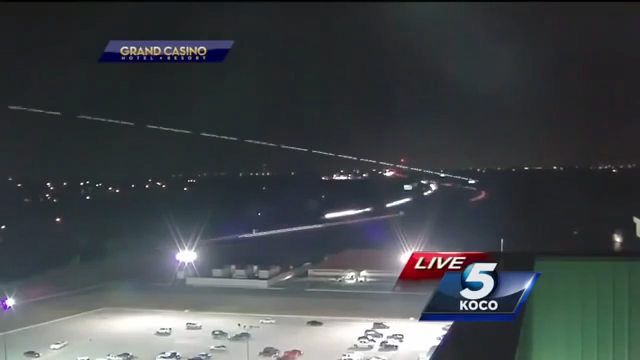 originally posted by: raymundoko
a reply to: 2Faced

It doesn't slow down, the film is poor quality and choppy.

Edit: as pointed out this was a documented meteor.

People will believe whatever they want though.

I just dont get these kind of statements, if it is a meteor, so be it. But who has authoritatively declared it to be so, what evidence specifically makes you so certain? All the people yelling it is a bird doesnt make it so...

Unfortunately, like many sightings, not sure there is enough to say what it is.

originally posted by: pirhanna
It doesnt look like an actual object to me. Not sure what it is, but the path goes down into the landscape and is still on top of everything, like its an overlay.


I agree. My first thought was reflection. Especially the way it seems to parallel the headlights of the cars along the road. Some weird internal reflection going on.

posted on Nov, 5 2017 @ 11:57 PM
link
Well that can be easily verified if somebody can get hold of a recording of the feed or original footage.

If its there, its real.

Def not a shooting star.

originally posted by: fleabit
Meteorite I think. Too fast, too straight for bug.. bat (bat lol) or bird. On these, you can easily see some flap if a bird, there is no "flap." Not a drone, I think either. Too large, and landing it next to an airport.. I guess idiots might risk it, but.. probably not.

I guess everything but an extra terrestrial craft huh..


originally posted by: intrptr
But not below the horizon. If a bolide enters the atmosphere it either burns up, or cools off and falls like a stone would. By the time it gets that close to the ground it is no longer emitting light.


Is it impossible for a meteor to keep on burning until it hits the ground? Why?

Quick reference guide to trajectory of meteors in atmosphere reveals the terminal phase of smaller objects: 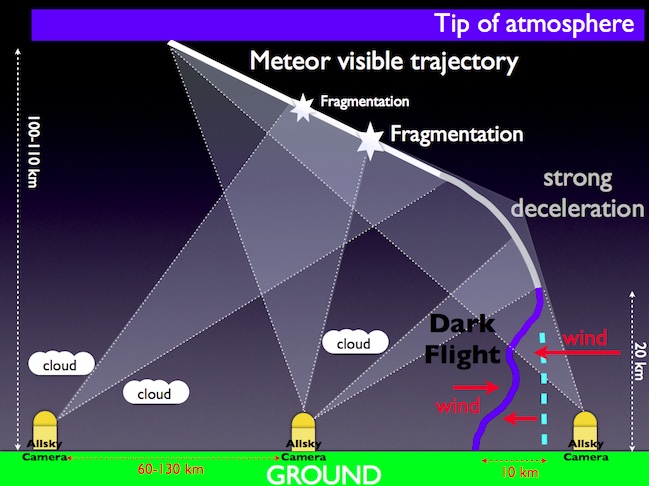 The apparent flat descending trajectory 'white light' is more like a landing aircraft, depending on the position of the camera relative to the runway.

That infogram is highly generalized and not representative of all meteors or meteorites.

I can testify that I have personally witnessed meteorites flying near-horizontally over an urban landscape, at an altitude of around 100 feet. One in particular that I recall caught my eye as it flew over my head; it was green (burning phosphorus?), had some sparks and snuffed out after like 4 seconds before impact. At first I thought it was a firework, but there was no way. Interesting the things you see on the night shift.

As for the object in the video: it looks highly reminiscent of a tracer bullet, including curvature of descent. Tracers and meteorites also tend to bounce off of the ground too if there is still enough velocity and stability of the projectile.

posted on Nov, 6 2017 @ 03:49 AM
link
After watching this and slowing it frame by frame I noticed some strange things. Just before the object passes in front of the red light pylon/tower in the distance there is a strange pixel formation that lingers there. Then as the object passes by it seems to either light up a leg on the tower itself or some kind of red beam shows up. Not sure exactly what in the world is going on there. I assume the latter. Later it seems to pass behind a lighted billboard or road sign as it passes directly over the highway on the right side. Just as it comes from behind that sign, it seems light up a window or something on a vehicle. A tiny white dot appears just as the object passes. Furthermore, there seems to be a blackened out area just in front of the object just before it passes the red tower. So with that I come to conclusion...

It's not a bird/moth object close to the camera.

The object is self illuminating things and is indeed off in the distance.

It is not a meteorite as it would not have a blackened out area in front of it. Meteorites are much faster/brighter/lit head to tail.

The object is not a plane. Planes are required to have 3 lights. A tail light,red light on one wing and green on the other. This is required by FAA by night time flights for orientation of the plane to tell which way it is headed by telling which side is starboard and port side.

Strange Note: Right where the object ends in the video the news anchor says it's going to be a good day right here or whatever bla bla bla. Holding her hands in a pattern like she is holding a imaginary ball. In the same exact spot the object cuts off. Weird.
edit on 6-11-2017 by sean because: (no reason given)