originally posted by: JourneymanWelder
they probably found out trump was president and got the hell out of here as fast as they could. god speed.

If you try to be funny, HUGE FAIL

Have you looked at my pic of the last frame just before it fades back to news room?? That lit up object is a lot further to the right of the that sign. They cut off the video not showing what happens beyond that point. The two "experts" they called in one guy was pointing right at that same spot and once again the video fades out right at that point.

So what if it is UAP?


So, why are we fixated on seagulls?

I can only speak for myself,

For me, its because it resembles a seagull more so than any other explination.

doesn't have to be seagull, any bird with a white belly that will create that sort of effect when light reflects off it.


Would it not be more reasonable, given the trajectory and the possibility of this being a light source in stead of a reflection, that this is some kind of drone?

To me it resembled a reflection more so than anything else.

my first guess would be seagull or another bird with a white belly.

Another poster brought up the idea that there could be a wire running in that direction above the ground and a car lights or some other moving light source at the right angle hit the wire and created the effect.


Or even a meteorite?

at the angle it came it at, I doubt it would still be burning up or even exist to be seen so low after traveling so far through the atmosphere.

The bright car park lights and the trajectory immediately made me think seagull from what I mentioned in an earlier post where I watch them fly above a bridge that has lights pointing into the sky.

Regarding seagulls: there are no seagulls in Oklahoma. If this is a bird it is not a seagull.

Do you folks use 3D world-building software at all, or cinema 4D or such? Just curious, who else calls on that experience when looking at UFO footage to understand angles, movement, physics etc.

I see it as a fairly small object somewhere between the camera's position and the parking lot position below it. I would actually put it at about the position (away from the camera) where that car is that drives across the lot. So it has a diameter of maybe 1 foot, or yes, maybe a large pigeon if you want to use a "bird" for scale..!

You can tell this by where its trajectory interjects the horizon line, along with its speed, direction and linear path. It's not a reflection, it does not have those traits or tells at all and it's not a plane because the footage is real-time (see: traffic, blinking distant lights, that car pulling into the lot etc) so if it is a plane it's a learjet on its way to crash.

My only gripe is where it's "landing". Clearly we don't know, and I think the guesses are good enough, but I myself would put it back a bit further and say that nearby "Wes Westing Lake" or whatnot lake is called, meaning, USO is not out of the question.

There's no indication this area is any kind of hotspot, but as noted, this is a few years old now, so what can you do other than watch the video, and maybe take a look around Wes Westing lake...

It's a little bit more work than I'd care to do for "UFO archeaology" but this wouldn't be impossible to recreate in 3D software and show exactly where the object is in relation to everything else. You can then also change the variables very slightly to show things it definitely cannot be (like a landing plane). There is enough information in that short clip to do it and to determine pretty accurately the size, speed and perhaps even the landing zone providing it followed exactly the same trajectory through to the end. But yeah sorry unless History Channel want to pay me $50 an hour to do it, someone else can
edit on 8-11-2017 by markymint because: (no reason given)

originally posted by: sean
Not sure what's going on, but I cannot post a image form my library. There are frames showing artifacts just before the object passes the red light pylon and it lingers there for a few frames and dissipates. Then directly below the object is a red vertical line that appears. Anyone else see that?? I also got a shot of the very last frame of the object to the right of the lit up freeway sign at ground lvl just before it fades in to news crew. They edited in that video so why did they cut it off and then later on claimed viewers called in saying there was a UFO?? The news crew that edited in the video didn't notice that? I find that hard believe. Then these two guys show up trying to explain that it's a meteorite. Not buying it. It clearly slows down and makes a angled turn adjacent to the freeway. I have seen a lot of meteorites and they are hell of bright and fast streaks, green ones, blue ones, white ones. Once one lit up the entire neighborhood green, it was really eerie. This just doesn't strike me as a meteorite. Maybe somebody can get a google map and line up the two freeways signs along with the red light tower and check the angle cause that trajectory path it takes seem to slow down at ground level with the signs. It surely would have hit the ground long before that right?

I agree with the right turn.
See my grabs from the video.

You can see it on Google Maps, here.

And this is that area with some features marked. 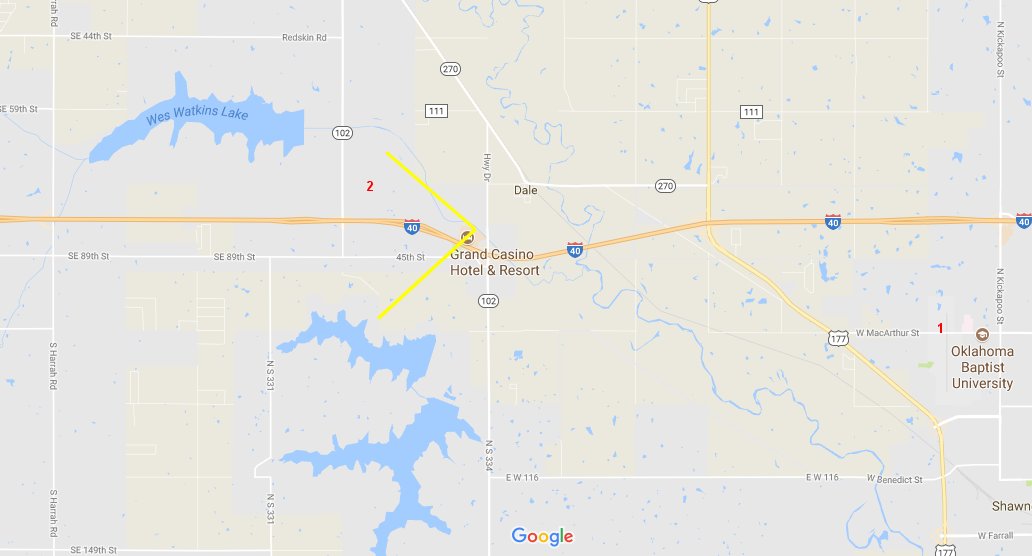 The (1) points to Shawnee airport, the (2) to the area I think is the end of the object's trajectory and the yellow lines more or less the field of view of the camera.


So, there is, in fact, and airport to the right, exactly where we can see the shape landing. It looks super cool, but it seems clear this was an airplane.

The shape "lands" in the area marked with the 2, and there's no airfield there.

Are you also talking about a reflection?

Regarding seagulls: there are no seagulls in Oklahoma. If this is a bird it is not a seagull.

maybe 50 years ago seagulls would not be found on a list of birds found in Oklahoma but today they seem to be quite common where ever there is water like a lake or river.


Even if was not a Gull, Like I said any white bellied bird would fit the bill in my opinion

posted on Nov, 9 2017 @ 11:53 AM
link
Problem being birds don't fly/move like that. Maybe a kingfisher, on a nose dive. But that isn't a dive manoeuvre. It's a linear, straight path with a fairly shallow angle of attack. Also why the meteorite explanation by the experts is complete BS IMO. It's at the speed of a kingfisher dive, sure. But gull's don't move like this. They like to circle, when they go down to get something, they perform an arc (think, seagull trying to steal your ice cream, it does not start its dive at you from half a kilometre away). They are messy with big flappy wings. If it was a gull, it would be completely recognizable as one, especially so if it was being lit up by a floodlight.

Which is another question, where this "light source" is if it's not a self illuminated object. We see large spotlights in the parking lot. But for this to "work", there needs to be a big spotlight pointing in the direction of the object at roughly the position of the camera, or on the roof. But why would they put a spotlight on the roof pointing out to the sky? originally posted by: humanoidlord
a reply to: Bullshark012

Well, you typed 'ARMAP'...not ArMap the ATS member, so I thought you referred to the NASA mapping software. So no wtf comment needed. He even replied to me here stating members are using all caps wrongly to reference his name here.

In response to markymint saying above that there is no indication of this area being a UFO hotspot...I disagree. Stillwater, OK just NE of OKC, where I lived and went to OSU in the early eighties, was where I and many others literally had UFO sightings almost nightly. We came to the conclusion that some kind of UFO base was nearby.

Is this a video of a UFO? I doubt it due to the speed it seems to contact the ground. If it didn't do that I'd say maybe. In Stillwater, I've seen them cross the sky overhead in a few seconds stop on a dime then cross back overhead to the opposite horizon in a couple more seconds,.....so hard to tell...with that level of tech, it could have blacked out and reversed course - never to impact the ground. But don't see it as a plane or a meteor.. and just doesn't fly like a bird....but, yes, you will see some seagulls in OK...,Bug..doubt it. Plane 'taking off' ...ridiculous.... Planes take off slow - this thing was ripping it.

BTW... Have a look on Utube video showing UFO's near Stillwater, OK in April 2017 near a storm...sorry can't post link - haven't been here in awhile & my phone won't copy it.

originally posted by: Bullshark012
Plane 'taking off' ...ridiculous.... Planes take off slow - this thing was ripping it.


Planes take off slightly faster than they land.


originally posted by: Bullshark012
Plane 'taking off' ...ridiculous.... Planes take off slow - this thing was ripping it.


Planes take off slightly faster than they land.

Edit: Still no way it's a plane landing...where is the airport where the video shows it 'landing'? And why no lights seen after it 'lands'? I don't think we will ever decide what this video represents... If real, intriguing.... If not, a hoax on live TV? To me, not a bug, bird, meteor or plane. UFO? Possibly. I remind you I have wtnessed on many occasions among groups of people, UFO activity in that area. Meteor is tough, due to no impact flash..but it's possible if small - but all the Many meteors and fireballs I've seen have some light trailing behind (some with smoke) ...this does not.
edit on 11/9/2017 by Bullshark012 because: (no reason given)
edit on 11/9/2017 by Bullshark012 because: Added important commentary

originally posted by: Bullshark012
Edit: Still no way it's a plane landing...where is the airport where the video shows it 'landing'?


That's what I have been saying for several pages, there aren't any airfields in that area and no airfields close enough for a plane to appear like that in a reflection.

And why no lights seen after it 'lands'?


We never see it stop, they change back to the studio feed.

I don't think we will ever decide what this video represents...