posted on Nov, 4 2017 @ 01:01 PM
link
The FBI gathered plenty of dirt on Martin Luther King Jr., how much was true will probably never be known for certain. What is certain, he was assassinated before the dirt could be used against him. I wonder why the FBI task force that reviewed the material in the 90's decided to allow it to remain suppressed?

A secret FBI dossier on civil rights leader Martin Luther King alleges that he had a string of affairs and other "sexual aberrations", as well as links to the Communist Party. It is dated just three weeks before Dr King's assassination in April 1968. The file was released in a tranche of documents relating to the assassination of John F Kennedy released on Friday. Mr Kennedy is not referenced in the file and it is not clear why it was kept secret for almost 50 years. There is no evidence that any of the claims in the report were verified. Its cover shows it was assessed in 1994 by an FBI task force on the JFK assassination, which concluded none of the document should be released. Many of the allegations contained in the paper appear to be reports of private conversations between others, or hearsay reported third-hand. One allegation, that King had a mistress in California with whom he fathered a child, was attributed to "a very responsible Los Angeles individual in a position to know".

Among its other accusations are that:

The list of alleged indiscretions would likely have been deeply problematic for the civil rights leader if it had been made public in 1968. 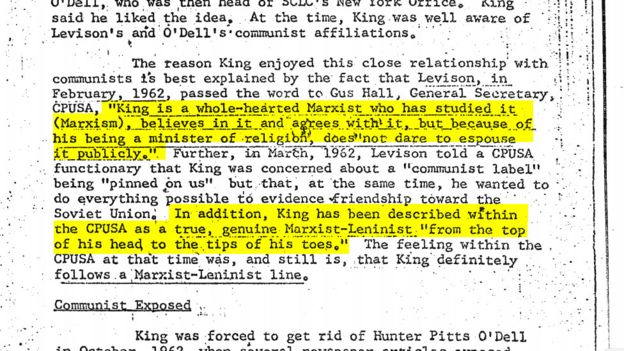 The paper paints Dr King in an extremely negative light, despite his receipt of the Nobel Peace Prize and his contribution to passing the Civil Rights Act four years previously. It is not entirely clear why the dossier was commissioned. But several pages of the 20-page document are concerned with Mr King's upcoming "Washington Spring project" which was scheduled for the coming months. It warned that despite Dr King's history of calling for peaceful protest, "the combined forces of the communist influence and the black nationalists advocating violence give the 'Washington Spring Project' a potential for an extremely explosive situation." Dr King was killed before the planned march.

posted on Nov, 4 2017 @ 01:12 PM
link
a reply to: seattlerat
I've seen a rumour about alleged affairs in somebody's Watergate memoirs (I have a small collection). One of them is supposed to have said to another that he had been eager to catch MLK "in the sack with one of his babes". It would take a while to track down the reference.

Come to think of it, the conversation may have been reminiscing about Johnson's bugging activities, and Johnson may have been the one who was hoping to catch MLK. I wonder if this was Nixon talking?
edit on 4-11-2017 by DISRAELI because: (no reason given)

I recall some of that "talk" from back in those days. It was not exactly unknown.

Also, it doesn't tell us much we didn't already know, in terms of what the FBI thought it knew about MLK and his motives and misdeeds. The source for this information seems (on a quick read) to have been an African-American clergyman, so my guess is that this was a case of one of King's rivals telling the FBI the sort of thing they wanted to hear, for personal purposes of his own.
edit on 4-11-2017 by audubon because: Contained unexploded mine from WWII. Not really! It was a typo as usual.

originally posted by: audubon
What on Earth is a file on MLK doing in the JFK assassination trove?

It's always been asserted that the FBI did all they could to set up and entrap MLK. He was never afraid though and wasn't intimidated by their tactics.

And then he was assassinated.

A very good vlog on King and civil rights movement. It is long, but very informative and delves into some of the issues with King. He holds no punches though, so if easily offended I can't help you. At about 14:30 for those who aren't patient, he goes into how J. Edgar Hoover tapped King's phones and got the audio of King sleeping with a women saying "I'm F'n for Jesus tonight!" It is in the Cointelpro docs...

King was a great man, but even great men like to get some pootang. I don't know why it is so controversial. King wasn't a God. He had his faults like anyone else.

Regardless, it was a pathetic attempt to try to bring MLK down and/or control him.


originally posted by: audubon
What on Earth is a file on MLK doing in the JFK assassination trove?

That's the only reason I can think of, but the letter of the 1992 JFK Act specifically mandates the release only of JFK-related records - it does not mention the King assassination (or anyone else's, for that matter). So it would appear (n.b.) that this material has been included... well, I'm not going to say "illegally", but I will say "without proper authorisation."

There could be any of several reasons. Since both killings happened within like, a year of eachother, a lot of the same people were involved. Officials, agents, undercover agents, lots of documents involved and needed in order to establish a lot of different things, such as confirming somebody's whereabouts, or maybe if the communists were suspected or investigated in the JFK assassination, and MLK is suspected of communist ties, they could've been watching MLK for any connections or leads or whatever in connection with JFK or Oswald or Ruby....

Its possible for something to be "related to" MLK but Also be related to the JFK assassination investigation. It doesn't have to be only one or the other you know.

You think theyre just gonna be standing there in the courtroom and say "wow, this piece of evidence could solve the JFK assassination!" and the judge says "NNNO! That's clearly a MLK related document, you guys!! That goes in the MLK File Cabinet! Gimme! It CANT BE USED for anything else no matter what! Look! It says MLK Right On It you guys! You're just gonna have to solve the JFK assassination some Other way..."

Never look to closely at heroes.

What a relief! According to this "Root" analysis, the FBI was WRONG, in it's reporting of Martin Luther King's adultery, fathering children with other women, hooking up with prostitutes, etc.,etc..

ANALYSIS of FBI REPORT: www.theroot.com...
Classified as "Secret".. The Report Itself: www.archives.gov...

It looks like sectors within FBI have been untrustworthy for a long time, haven't they.