Someone know's, someone in authority whom has a responsibility above and beyond the US government directly to it's citizen's so why are they not talking.

This is a definite case of a serious and criminal cover up, maybe the guy's behind this want to cover up what is looking more and more like a major external and planned terrorist attack inside the US but this is not the way to go about it, murdering people merely make's them even worse - far worse - terrorists than the scum that perpetrated this massacre which seem's to have been a re-run of the Paris nightclub massacre but on a larger scale.

One thing is definite here, if this silencing of these innocent american citizen's is being orchestrated by anyone in the US government or law enforcement agency's then the US is not a democratic nation and those ordering these hit's are actually terrorists themselves.

This need's investigating, I am not even in the US and hate terrorists but this makes me both certain beyond any shadow of a doubt that there is a silencing operation going on to dispose of witness that may cause head's to roll due to there incompetence and in fact allowing - or in the case of the CIA maybe even perpetrating - this atrocity to occur AND it make's me very very angry indeed with these people whom think they are above the law's of both man and God, well they are in for one HELL of a shock believe me because while they can pervert the law's of man they will definitely face a judge they can not escape or make excuses with.

Believe me if this is a cover up it will come to light and there head's will definitely roll, perhaps far more so for there continuation of turning these people into further extended victim's of this atrocity and by that I believe it was perhaps not even an external terrorist (the guy whom is claimed to be the murderer was definitely a head case but could he even have managed to pull off a fraction of those murders and I for one do not buy that he was alone in his action's - he may even have been a convenient stooge to pin the blame on quickly but why him and not a jihadi believing arab american?) but one of those false flag event's, an orchestrated attack ordered internally and I do not say that lightly because I am no fan of False flag theory's and it is a claim used too often to excuse terrorists that have really perpetrated terrorist activity by deflecting the blame onto innocent agency's, well in this case they may not be so innocent those agency's.

I see the MSM was on the case to debunk the 'fake news.' Like the USA Today: Link

And the Snopes article previously posted.

I seriously hope you are correct and if you are then I willingly tender my apology's to the agency's accused in my own post and would feel ashamed of having thought they could do such a thing but only if you are correct.

Wait, what is it that you think I am trying to assert?

There is truth in the OP article, but there's also a lot of unsubstantiated stuff -- information that is literally sourced only by previous articles at 'Neon Nettle.'

And then there is the truth that was omitted, entirely...like I pointed out here: Link

Nothing I have written rules out a false flag.

posted on Nov, 3 2017 @ 02:21 PM
link
I do at least find this interesting...
A few days after I was back home and some dumbass with a black backpack and black hoody was walking down the street pointing what I thought was a gun at people and things. He turned and pointed it at me and I almost lost it! I was going to run the guy over! I kinda thought oh great here we go!

originally posted by: MotherMayEye
a reply to: LABTECH767


The fact there is an active disinfo campaign lends credence to the idea of a false flag.
Note carefully those sites that mix fiction with fact and see if they have a political leaning.
If they do there's a good chance someone is paying them to discredit the truth and muddy the waters with lies.
edit on 3-11-2017 by Asktheanimals because: (no reason given)

posted on Nov, 3 2017 @ 03:07 PM
link
The moment I saw this thread I thought: "That'll be a YourNewsWire.com story." I was wrong, it was NeonNettle.com, which is the only fake news site that's even worse than YourNewsWire.

Trudging through NeonNettle's *cough* story, I identified the following facts, offered here for whatever value people might find in them.

1) Dennis and Lorraine Carver did indeed die in a car crash. There hasn't been an inquest (or at least not yet) but equally there's nothing to suggest it was connected to the Vegas shooting. Tens of thousands of people attended the Route 91 Festival, and car-crashes are not exactly rare. What makes this pair so special, apart from the grim irony?

2) Danny Contreras was indeed found shot to death in an abandoned house. The house was a known haunt for drug deals, and Contreras was the 207th homicide victim in Clark County this year alone.

NeonNettle reproduces a tweet allegedly sent by Contreras claiming he was chased out of the Route 91 Festival by two armed men. Even if that tweet is genuine (and it might not be, since the account has been suspended) the profile picture appears to be of someone who looks very different to the "Danny Contreras" who was found dead. His bereaved family have set up a GoFundMe for his funeral and you can see his mugshot there. (It's wrong to judge by appearances, but the dead Danny Contreras looks like a nasty piece of work). If this is the same man, which seems very unlikely indeed, it's kind of odd that his family didn't mention it.

3 Chad Nishimura has never vanished, and the source material cited by NeonNettle to support the claim that he has been murdered does not exist. Not only that, but Vegas police have no record of "Chad Nishimura" being reported missing, murdered, or even booked for jaywalking. The entire rumour came about because NBC deleted an initial story about him when it drew so much speculation that he went into hiding to avoid being pestered by conspiracy fanatics!

In case it needs emphasising, the Chad Nishimura story is not a mistake, or misreporting, it's an outright lie by NeonNettle.com.

4) Kymberley Suchomel really did die of (currently) unknown causes at the age of 28. I don't think there has been an inquest yet. I think this is the most unusual death on NeonNettle's list, but that doesn't automatically mean it was suspicious, and with no inquest findings I'm not going to comment either way.

5) John Beilman committed suicide after murdering his disabled daughter. There is no link to Paddock whatsoever, that's just another of NeonNettle's outright lies, and it was debunked on ATS as soon as NeonNettle first published it (in early October!)

Some observant readers may feel that there is still some mystery that has not been satisfactorily resolved in this post. They would be right. NeonNettle.com states in its headline that "7 Las Vegas Shooting Witnesses Now Dead Within 1 Month of Attack." In fact, their story only list six witnesses.

So either they are including Paddock himself as a "witness" (which is bizarre) or they didn't even bother to count the witnesses in the story they were just about to publish. (I'm generously assuming there is someone at NeonNettle who can actually count.)

TL;DR - I wasted my time to save you yours. NeonNettle prints rubbish and lies, and this "story" isn't even worth reading for humour value.
edit on 3-11-2017 by audubon because: typo of course


originally posted by: MotherMayEye
a reply to: LABTECH767


The fact there is an active disinfo campaign lends credence to the idea of a false flag.
Note carefully those sites that mix fiction with fact and see if they have a political leaning.
If they do there's a good chance someone is paying them to discredit the truth and muddy the waters with lies.

Paying them OR behind the website. It looks to be a site that the MSM and Snopes loves to debunk. 'Neon Nettle' makes the MSM and factcheckers look more credible! So, they probably exist entirely for that reason.

originally posted by: Shamrock6
a reply to: EA006

But I can prove that the guy shot outside a church was identified as somebody other than Nishimura.

I can prove the Beilman story came from a known hoaxer.

Thanks, but I'm pretty certain I'm more familiar with what I know and don't know than you may be.


I made a statement to you that didn't really concern the thread.

Without using online info bro, prove to me you know what you think you know.

You can post your results here at ATS so we can see.

posted on Nov, 3 2017 @ 04:30 PM
link
Chad Nishimura is not missing either, he went to cali hiding from reporters. his mom said welll change but i think he was guggin out from all the reporters.

from his mothers, face book. 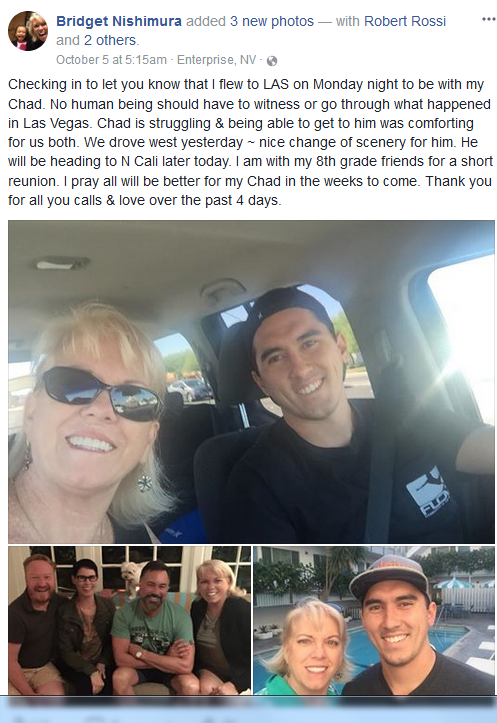 Go After the Ball, Not the Player!

All of them died. There were threads on each one as they died, so whatever you think of this site, it's irrelevant.


In addition, just to digest and all, people can talk on all sides of the puzzle, believing or disbelieving media spin or official stories, however: facts and occurrences and actions speak louder than opinions and words.

The old maxim: The Tree Bears Fruit. And that fruit is all you need to see.

posted on Nov, 3 2017 @ 06:04 PM
link
With regard to the Carvers' deaths in the fiery car accident...this is one of Lora Carver's FB posts about her adult daughter, Brooke, who made statements to the press: 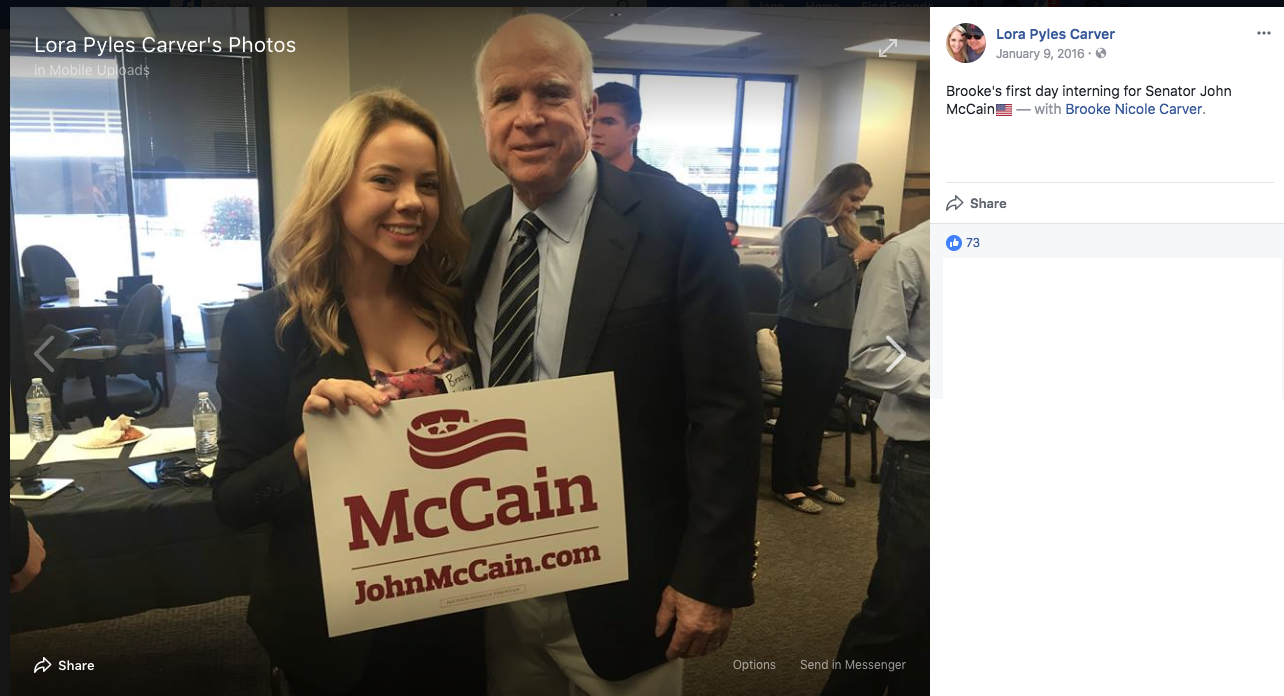 It's more interesting to me than anything in the OP's link about the Carvers.

Ya, I'm taking this with a shaker full of salt..we have already had false reports.