posted on Nov, 3 2017 @ 11:22 AM
link
Since everything stinks about it this case
I wouldn't doubt there is foul play with some of
this witnesses .

The religious like belief that surely
someone in power would have said something if it was
a conspiracy is NOT investigating and decidedly
NOT scientific.

The auto rifle used is not the same gun the MSM
says it is, that's easily verified.

The official story has changed countless times
with the latest being that LVMP swat killed Paddock.

Guess all these are hoax sites too right?

Funny all the witnesses say there was multiple shooters

posted on Nov, 3 2017 @ 11:31 AM
link
People really need to stop listening to the msm as there only news source. they are controlled!!! If you dont know that your being controlled. and brain washed. msm or anything that has to do with em is the "real fake news" just look into stuff for your self it's not hard

originally posted by: OtherSideOfTheCoin
So let me just quote you a couple of the other articles on the front page of this site.

Video of man floating in the sky goes viral

Honestly just take a few minutes to look through this site and tell me its not trash.

This should be in the Hoax Bin.

That dose not prove it's a hoax site

Sure might be a coincidence but makes one think...

Where's the proof that Beilman was a witness with a different story?

Where's the proof that Nishimura is dead?

Where's the proof that the husband in the married couple had a different story?

Where's the proof that Paddock had a different story?

I do have to retract... I was hasty didn't check what I read and jumped to conclusions my apologies. I admit they are not facts after I quickly searched the net. However I still stand by my point if its true its more than a coincidence.


this is the guy that is suppose to be one of the so called victims of a cover up. 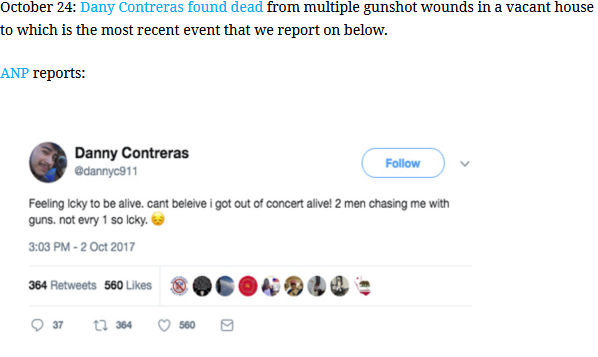 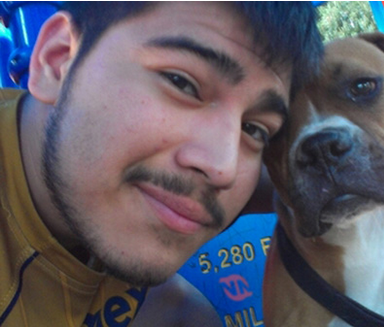 source for above images, there are a couple more.
BODY COUNT RISING: Another VEGAS Shooting Eyewitness FOUND DEAD In Abandoned Home 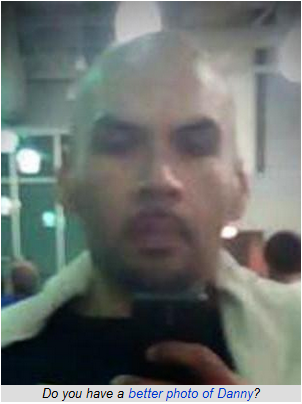 and as much as i hate using snopes, it seems all other links are mostly the same bs stories.

Did a Mandalay Bay Hotel Worker 'Vanish' After Giving an Interview?

originally posted by: Shamrock6
a reply to: szino9

Where's the proof that Beilman was a witness with a different story?

Where's the proof that Nishimura is dead?

Where's the proof that the husband in the married couple had a different story?

Where's the proof that Paddock had a different story?

Humansarefree: says science has proved evolution is fake and the planets aligned into a crucifix when Jesus died.

Dailydose: ran "articles" about how "UN Troops" had been ordered to kill Americans who didn't surrender their firearms.

Tigerdroppings: you linked to another forum that has posts with the same "source" material as somehow being proof that the OP source is true? Pro-tip: just because the same thing gets posted to another internet forum that isn't ATS doesn't make it true.

Anonymous news: one of the most popular articles on that site is about a supposed admission by the CIA director that they've been using chemtrails. If you look at the actual speech rather than the selectively edited version, he's talking about possible future uses of aerosol technologies.

Sorry, none of your sites are the gold standard for journalism. Just because one or two of them may have an article they took from Reuters doesn't mean everything else on there is true.

But I can prove that the guy shot outside a church was identified as somebody other than Nishimura.

I can prove the Beilman story came from a known hoaxer.

Thanks, but I'm pretty certain I'm more familiar with what I know and don't know than you may be.

The Carvers and Suchomel really did die and they did have established links to the shooting.

So, it seems like typical disinfo to me...tossing in some truth with some easily debunked fiction.

That said, there is one more death linked to the Las Vegas shooting, not mentioned in the OP link, and that is the mother of the off-duty police officer who was killed in the shooting.


Sheryl Stiles was 56 and reportedly died of a heart attack while in Las Vegas for her son's funeral...which seems reasonable enough, but there are some grisly details that are unusual (bolded below).


The mother of a slain cop killed in the Las Vegas shooting massacre suffered a heart attack and then died two days after her son’s funeral.

Lewis Stiles, who traveled from Kentucky to Vegas for his nephew’s funeral, said his sister suffered brain damage after the fall, according to the Review.

Stiles was transported to a Clark County hospital before being transferred to another where she was taken off life support Sunday.

If she fell off first, then that is very unusual.

And I know there will be some to say it's not unusual to step onto an escalator, have a heart attack along the way, and then fall off and sustain brain injuries, but I just personally think that's unusual, too. I've never heard of such a thing. It's unusual enough to note, IMO.

Unfortunately, there is just a screenshot of that tweet and no one thought to archive the page.

Also, I found that pic of 'Danny Contreras' and the dog on a different 'Danny Contreras' Twitter account than the one shown in the screenshot of the tweet. So, again, there's just no real evidence of a link between the murdered Danny Contreras and the LV shooting, IMO.