posted on Nov, 1 2017 @ 03:18 PM
link
Well, the list seems to just keep on growing, although in fairness (and I'm just playing devils advocate here), his apparent offence was seeimigly at the lower end of the scale;

Sir Michael Fallon has resigned as Defence Secretary in the wake of allegations about sexually inappropriate behaviour after admitting that his past conduct may have "fallen below" the high standards expected of him .

The Defence Secretary earlier this week admitted that he had put his hand on the knee of a radio presenter at a dinner 15 years ago.

In a letter to the Prime Minister, Sir Michael said: "A number of allegations have surfaced about MPs in recent days, including some about my previous conduct.

Unlike other incidents, the Prime Minister did not refer Sir Michael for a Cabinet investigation. The Telegraph understands that there will not be a reshuffle but that Sir Michael will be directly replaced.

[...] It comes amid a growing sexual harassment scandal at Westminster, with some 40 Conservative MPs being named in a so-called 'dirty dossier' compiled by Tory staff of politicians against whom accusations have been made.

Theresa May has come under pressure from her own party to investigate alleged sexual harassment.

The Prime Minister Theresa May has been accused of ignoring claims of sexual harassment and is under increasing pressure to launch an investigation into allegations. 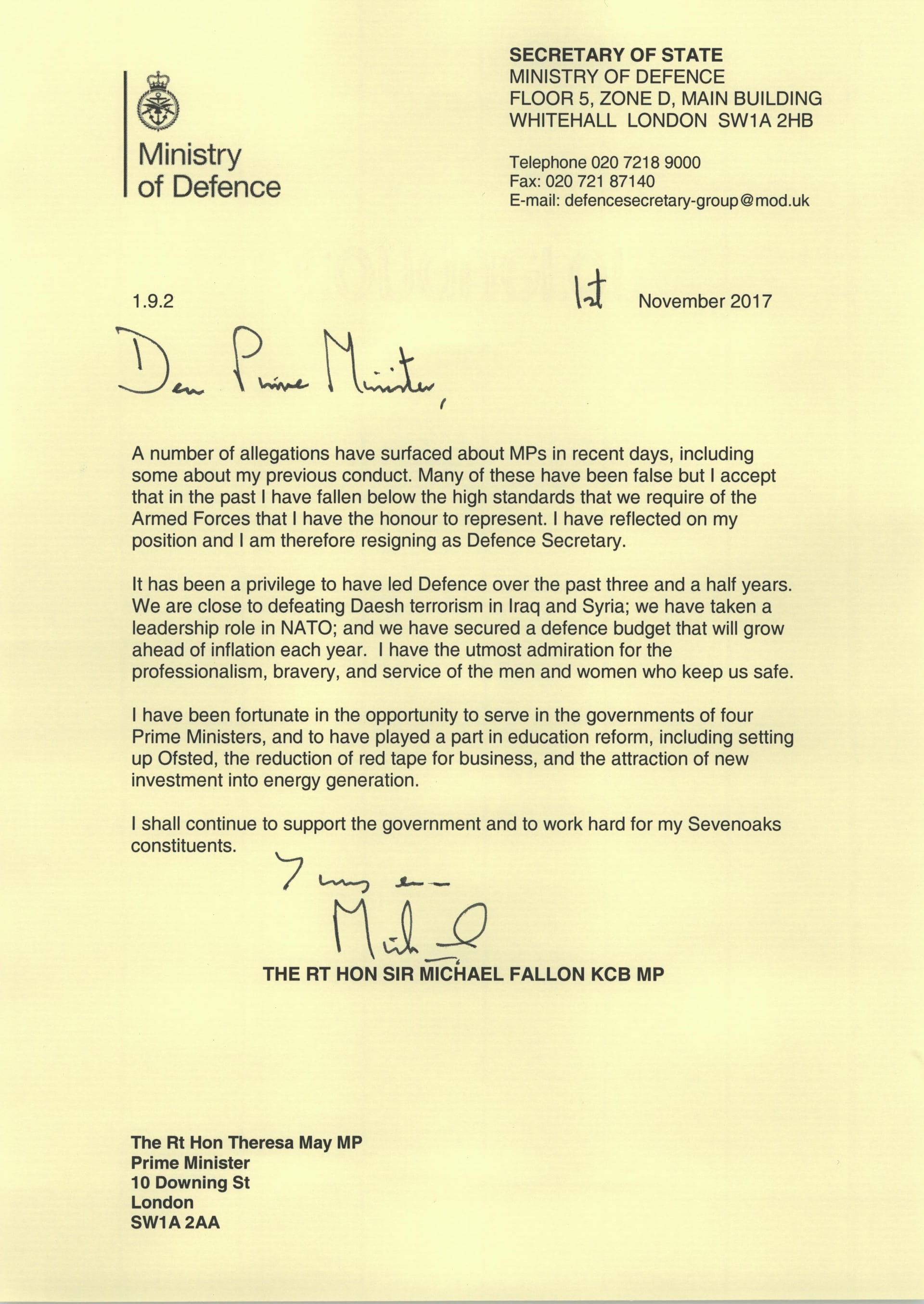 It's interesting to note he says 'some' allegations made were about him, yet this story only mentions his placing his hand on a womans knee - I wonder what else there is?

What do you folk think; is it right that he resigns over placing his hand on a woman's knee 15 years ago, or is this becoming a bit of a witch hunt?

This story is still breaking,
edit on 28/12/12 by MerkabaTribeEntity because: spelling

posted on Nov, 1 2017 @ 03:34 PM
link
considering it was 15 years ago, and it was just putting his hand on her knee, which she obviously didn't like and threatened to punch him on the nose if he did it again (which is fair enough), he apologised at the time and she didn't make a big deal of it either. She possibly felt she had put him in his place and that was the end of the matter.

So, it makes me wonder why he would resign so easily over this one stated case? Lose all that nice pay and cushy expenses filled job plus have a bit of a stigma hanging over his head regarding his bad behaviour, for something this small? Makes me suspicious that there is a LOT worse he has done, but in going now with a small offence he is maximising his damage control so that other things won't come to light (possibly) and damage him and the rest of his party.

posted on Nov, 1 2017 @ 03:43 PM
link
I heard alistair Campbell’s name mentioned on Radio 4 news today when they were talking about journalists knowing the stories about MPs and there sexual ways

I am not defending this creep, but at some point we as a society will see the enemy everywhere. It always devolved to that point before it gets better.

He will likely not return to a position of such authority, but he will also not lose his knighthood (I would think). He has plenty of other opportunities I would think, this was quite some time ago and not egregious

posted on Nov, 1 2017 @ 04:24 PM
link
I fully admit I do not have a clue what this is about , I mean he touched some woman's knee 15byrs ago and now he's resigning ?
I mean WTF? on the surface these are pathetic complaints ; are they not bothered what the IICSA enquiry is for ?

It's mind boggling. Fifteen years ago and touching a knee now resigned? The world's gone / going mad. Fallon was one of the few who talked sense.

Maybe it matters most how this all started , then we might understand it . Was it sparked by the Weinstein business , turned into a social media frenzy , and then some women MPs thought simultaneously, "let's get the men" . I am quite sure the schoolteacher brainwashed type of female that get into politics are pretty offensive themselves ? Just in a super-nasty pc fascist type of way ; european feminazis . Could that be a start ?

It's mind boggling. Fifteen years ago and touching a knee now resigned? The world's gone / going mad. Fallon was one of the few who talked sense.

I have no idea what planet you're on, but he was a warmongering pig

Michael Fallon's resignation is ridiculous, says female journalist at centre of 'kneegate' 'This is the most insane, absurd and ridiculous resignation of a cabinet minister ever' Henry Austin 6 mins ago

Earth............... Planet Earth. He talked it pretty straight in my opinion and better than most of the rulers. So what if he touched a leg 15 years ago, it's hardly genocide? First job I ever had a woman used to rub my leg, so what, it's hardly mass murder!

posted on Nov, 1 2017 @ 05:17 PM
link
Yeah, he did a lot worse than touch a knee, and he's resigned from the Cabinet before the much worse stuff starts to come out.


Also, not resigned as an MP I notice, just as a cabinet minister. Scumbag.

But that whole witchhunt on all men, at least in the "political correct" west, needs to stop.
The male human species and it´s mating behavoiur is sooo cheeky, suddenly.

We are not even allowed anymore to look at women, to pay a compliment to women, striping a women with any part of your body or even lay a hand on their shoulders or knees, all that is interpreted as sexual harrassment nowadays.

So, do women want us to stop make compliments(there was a case some days before, with a german member of the Bundestag that complained about being called looking nice and being young), to not look at them anymore(i wonder why they all use tons of make up then, if nobody should look at them anymore), to not touch them anymore???

It´s better as it seems, because if you don´t follow those "rules", maybe your career, your family, your life will be destroyed in some days, months, years or decades.

What is that suddenly for a crap? Now women, most of them in powerful positions, rich women, women that profit from being women, from using their sexuality, make accustions against men, of something these men allegedly did decades or years ago. Why do they come up with that stuff now, after years or decades?

If somebody would sexually harrass me, i would not be silent for years/decades. I would take action in the same second the harrassment happens and i would go to the police after that. And maybe to the press, if the perpetrator is a well known and maybe powerful public figure. But i wouldn´t be silent just to maybe keep my job or have any other profits, because that would make me a male prostitute and nothing else!

Why am i reminded to the novel " The Virility Factor by Robert Merle:

(...)The Administration changes hands: the new President, a woman. Government and business are ruled by elite wonder-women.

A hand-picked group of scientist and doctors is placed in Blueville, a closely guarded "Protected Zone", and assigned the task of finding a vaccine for E-16. And they must find it fast - men on the outside are choosing to be sterilized - or castrated - rather than face death.(...)

We men nowadays are not ill and dying because of a disease, but our careers, families, lifes could be ended by false accusations, and some men start to change their behaviour because of that, don´t enter elevators anymore if the only other person in the elevator is a woman, and stuff like that, for example. Do women want to see us voluntarly being castrated, want to see male foetuses aborted, because men are now the only one evil on earth?

And, how would it be the other way around? Get sexual harrassed as a man, by a woman, and then go to the police. They will laugh about you and think that you´re not a real man, that´s all.

Would it be enough if i just say that Angela Merkel laid her hand on my knees, 15 years ago, to make her resign???
For women it seems to be that easy nowadays, to destroy mens life.

Till that ridiculous PC thing comes back like the most evil boomerang to the heads of those that threw him!

We're finally uncovering the sexual predators that we've long known to be in political power.

And yet, Trump was recorded saying "grab her by the pu$$y" and became a president...

I loved his defense though "locker room talk"... classic...

Fallon should have taken a leaf from Trumps book and called it "Dining room antics" or something.

Well, the list seems to just keep on growing

I agree, he is probably on the list that is circulating and knows he has no defence against something else on there.

According to the Guardian, friends of Fallon said there have been 'recent flirtations'...so definitely more to come and not something he can dismiss as a one off years ago.
edit on 1-11-2017 by DrHammondStoat because: (no reason given)

Someone's got some dirt on him so he's off before it gets worse.