posted on Nov, 1 2017 @ 06:23 AM
link
The Brigg Stones are the remains of a Roman weir that made the River Wear navigable at any tide as far as Chester-le-Street. The huge effort suggests further work upstream to Durham was likely. I've examined the remains of weirs, towpaths, river narrowing, fish holding ponds and evidence of a modular lock in Kepier Gorge, a short distance downstream from Durham. I thought they were Norman remains.

The Normans held prisoners in Kepier Gorge and forced them to quarry stone for Durham Cathedral. The stone was brought upstream to the cathedral by boat.

Now I wonder if the Normans took advantage of Roman river engineering. It appears the river may have been navigable from the sea to Durham and beyond almost two thousand years ago.

Kepier means Kep Weir, a weir with fish traps. Flint tools found in the vicinity of the gorge suggest fish were harvested here 10,000 years ago, most likely using fish weirs made from stones rolled down into the river, and basketwork traps. There is a very long history of river engineering here.

In the 1700's there were attempts to organise a scheme to make the river navigable from Durham to the sea. It was considered feasible, but expensive, to bring 20 ton vessels as far as Durham.

The flood of 1771 destroyed almost all man-made structures in or on the banks of the Wear.

Links to the ongoing investigation into the Brigg Stones.

A possible Roman name for the Brigg Stones weir.

A poem mentioning weirs and fish.

Some music by Godric of Finchale. Finchale is a short distance downstream from Kepier. Godric worked with Bishop Flambard in a good cop/bad cop routine. Stories about his life suggest he used his technical knowledge to make work easier for the captives quarrying the stone for the cathedral.

One of his tricks or 'miracles' was to produce fresh salmon for his guests when the salmon weren't running. It makes sense that his famous fishery would be upstream in Kepier Gorge. I know of two possible fish holding pools beside weirs in Kepier Gorge where migrating salmon could be trapped with a weighted hurdle across the entrance. The stories about Godric suggest he had a secret tunnel. He could sneak out and collect a fish, put it in one of his basketwork traps near Finchale, then send out a servant to find the fish caught 'miraculously' when no salmon were running. Guests suitably impressed.

The history of inland navigation on our rivers is not widely known. Study of the Brigg Stones will help bring awareness.

Opponents of recognition of public rights of navigation in all rivers claim that there were historic limitations on navigation. In particular, they claim that navigation was limited to the tidal sections . . .

We present the evidence for a public right of navigation.

There are estimated to be 42,700 miles of river in the U.K. but only 1,400 have a clear and undisputed right of public access.

There is a great deal of evidence of such a right throughout our recorded history, from Roman Law to Saxon Charters, to Magna Carta, to the work of the Commissioners for Sewers who were charged with removal of obstructions to navigation, to the absence of the need to create specific rights of navigation within the Acts of Parliament creating statutory river navigations. The public right of navigation on all rivers capable of navigation was completely unquestioned for 1800 years.

posted on Nov, 1 2017 @ 06:32 AM
link
THere's a Roman ford across a river just a few miles from me, which is still there today. Pretty broken down, but when the river is low you can see it. Amazing engineering.

I've crossed a small ford in Teesdale several times recently. I was amazed by how well built it is in spite of being on a little-used single track lane. Now I've seen photographs of the ford at Barnard Castle I realise the small ford may be Roman on a route that was important to them. 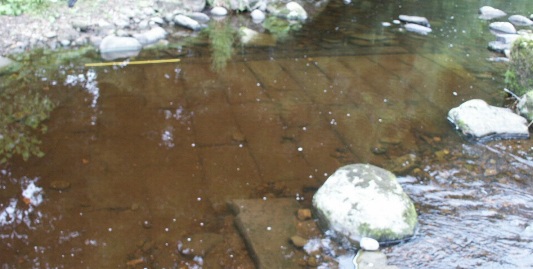 posted on Nov, 1 2017 @ 06:45 AM
link
a reply to: Painterz I have seen pictures on the web of that. But I really like fresh pictures of relics. Will you please take a picture next time you can? I would really like it for my collection.

You should be metal detecting!!!

It's Comrie, Perthshire, scotland. There's a tiny little Roman marching camp on one side of the river (where some lucky blighter found a perfect little gold roman coin just sitting once in the middle of a path) and a ford crossing leading into the wild untamed frontier lands.

This is about as far North-west as the Romans got. (They got further north up Aberdeen way, but this was one of their penetrations into the foothills of the highlands.)

Ardoch roman fort is nearby too, it's a much more substantial Roman site.

posted on Nov, 1 2017 @ 08:26 AM
link
If all goods coming downriver from mineral rich Weardale had to be unloaded from river craft and transferred to sea-going vessels at the Brigg Stones weir that would make it an ideal customs post. A good reason for it to be a complete barrier which is what the historical accounts suggest.