Humans cannot help but be humans. We can't help but reveal "what" we are by what we do. The body itself, a wondrous fractal creation of self-organizing dynamics in space-time - a symmetry dynamic - the body's physical form an "attractor" which the cell's which make it up consistently dissipate energy towards. Thermodynamics in matter taking the form of a particular dynamical object invested with telos - purpose - built around the triadic logic of disorder, order, and harmony. Each organism is a teleodynamism. More specifically, each organism is the semiotic gestalt of its history of interactions, from the beginning of life (as cells, which each organism is made from) to the evolution of complex animals. All of this is a history of semiotic coupling between a thermodynamically dissipative energetic structure and the perturbations it encounters in its territorial milieu.

Its not hard to imagine how evolution unfolds from these facts. Life is based in symmetry, or continuity, between the self-organizing and self-enclosed structure, and the meanings that its intrinsic "neediness" i.e. tendency to dissolve, generate affects (such as hunger) which drive the system (it's mind and body) towards a world that represents the salient objects that correlate with relaxing the stresses of the state in question (hunger, and so, a burger is found).

I'm about to argue something that may offend the dogmatic, but seeing that reality and its processes are non-arbitrary, i.e. they follow rules we can track and make reference to, this claim is merely a corollary to how we function i.e. by symmetry dynamics. In other words, our minds are sensitive to coherent reasoning because our brain-body-mind is built to attune to and sense the coherency of reality in terms of what we know. Our minds are always at the 'edge' of computational dynamics which the "unconscious" (i.e. brain) carries out, leaving us the "summation" of its calculations, always stretching back to the threat-safety ethological distinctions which underlie the functioning of every animal system that exists. That is, good is that which supports the motivational dynamics which serve to reconstruct the body of the organism i.e. the objects of the world. Bad is that which threatens the systems coherency.

Evolution is always about continuity of the system, and so, avoiding dissipation is the "negative pole" of the systems functioning (inducing inhibition or excitation depending on the meaning and medium of the signal) while attuning to specific objects which bring about enlivenment and wellbeing (i.e. pleasure) entrain the "positive pole" of the system. Bad and Good determine the wiring of brain functioning in all creatures. The secret to be known, and which brain science is uniquely suited to helping us understand, is what constitutes bad and good in human functioning.

This question more or less belongs to the realm of developmental psychology, and so, analysis of the interactional sequences between the newborn system (baby), and the other humans in its environment. An angry face and a happy face constitute a negative and positive stimulus. A stressed voice or a removed way of being speaks a disenlivening influence, and "patterns" the systems interactional dynamics according to the affective-meaning (and its relational implications) implicit within the expressions of others.

In short, life gets "into our genes", because there is a deep structure which keeps the human being in a continuous contact with its environment; indeed, there is a dynamical continuum of which we are only dimly aware i.e. having brains which dissociate certain forms of meaning. 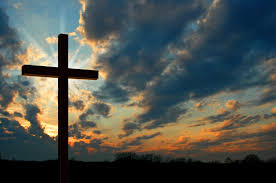 The Christian cross expresses a dissociated and traumatized psyche. In order to appreciate this fact, it must be compared against what is sometimes called the "gnostic cross": 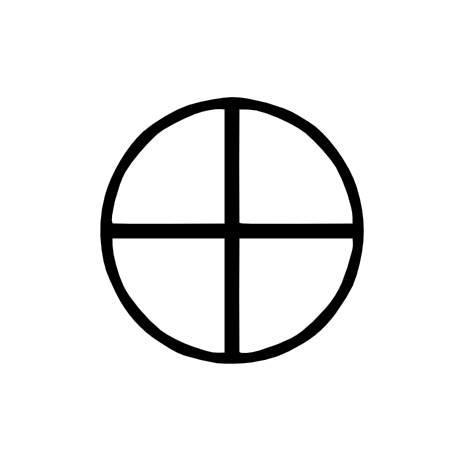 The difference may not seem like much, but it is more or less the opposite of the other one.

Another representation of a gnostic cross recapitulates the first cross 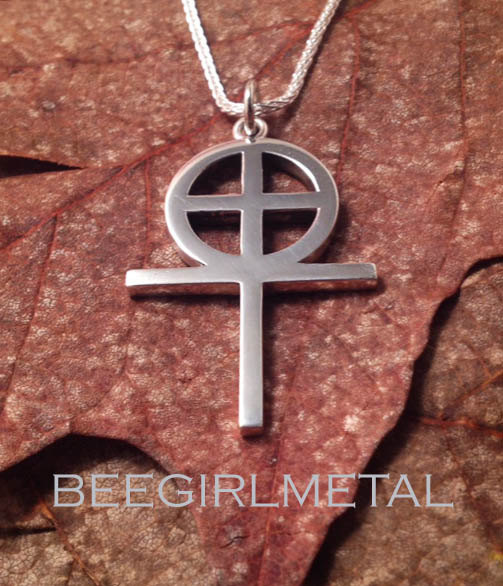 As you can, I am drawing a distinction between the lengths of the crosses and the general asymmetry between the vertical and horizontal axes.

In very basic terms, reality can be said to have two basic dimensions: the horizontal plane, in which our physical bodies dynamically interact with other bodies, and in the process, our observing mind is affected by the dynamical meaning consequences of the objects that we interact with in the world. The horizontal is dynamical; conversely, the vertical is 'existential', and more or less converts to what is meant by mystics when describing different 'gradations of being'. Dynamical effects may accrue, but the sensibility of the relationship to the horizontal vector can being badly damaged by interpersonal trauma, and so, the mind will metaphorically "cut off its arms", while still egotistically holding to "knowing reality truly" i.e. to a gnosis.

The Christian cross is this; a traumatized and traumatizing culture which holds to idealistic fantasies and scenarios and dogmas that serve to keep the unwanted facts of reality at bay; the mind 'shrinks', or rather, forms, around the energetic and dynamical effects of meaning interactions with the environment - and this is what the brain is: the shaping of neural hardware (and its complex molecular states) according to what objects "mean" to the system of the "brain", which is also the system of the "mind".

The minds need to represent reality in a shrunken way is not the fault of Christians, but of being ignorant of how the mind-works. Christianity emerged from Rome and Judaism - a pagan world obsessed with liberty, and the Jewish world obsessed with purity and responsibility. No doubt both groups mutually provoked one another into polarized ways of relating to themselves and one another; the religiosity and lack of a common lingua franca i.e. science, in which to address matters, created this general state of affairs.

I like the Yin-Yang symbol because it speaks to the dynamical point-counterpoint "dance" going on between a singular continuum that is paradoxically "two" in its dynamism.

The horizontal and the vertical represent the two planes of being - the dynamical which intersects with the lives and beings of other creatures (horizontal) and the existential which speaks to our own personal existence and experience of being a self with needs for coherency.

Naturally, and truthfully, only a circle can bound and encompass these two planes, as the gnostic circle does. The dynamical-horizontal and the existential-vertical are two ways of thinking about our unity with existence; one, partly outside of us, and which demands from us a recognition of responsibility to those we are affected by and affect; and the other, a place where we first learn to express our agency - to feel and be a self. Liberty arises from here, but it must acknowledge the same circle - the same limit - which circumscribes its being.

posted on Oct, 31 2017 @ 10:24 PM
link
“So we attempted to do what was not allowed us, what we were not prepared for. Manipulating the words of the Book, we attempted to construct a golem.”
“I don’t understand….”
“You can’t understand. You’re the prisoner of what you created. But your story in the outside world is still unfolding. I don’t know how, but you can still escape it. For me, it’s different. I am experiencing in my body everything we did, as a joke, in the Plan.”
“Don’t talk nonsense. It’s a matter of cells….”
“And what are cells? For months, like devout rabbis, we uttered different combinations of the letters of the Book. GCC, CGC, GCG, CGG. What our lips said, our cells learned. What did my cells do? They invented a different Plan, and now they are proceeding on their own, creating a history, a unique, private history. My cells have learned that you can blaspheme by anagrammatizing the Book, and all the books of the world. And they have learned to do this now with my body. They invert, transpose, alternate, transform themselves into cells unheard of, new cells without meaning, or with meaning contrary to the right meaning. There must be a right meaning and a wrong meaning; otherwise you die. My cells joke, without faith, blindly.” – Umberto Eco, Foucaults Pendulum, pg. 566, Harcourt, 1988

Dude, language is textured and layered because it’s sybolism serves a purpose, your thread premise may have merit, but your delivery vis-a-vis indiscriminate, unnecessary use of the philosophical lexicon is telling. More likely gesturing of your lack thereof...less is more. Concise over hyperbole (in your case, gross misuse of the English language for the purpose of appearance, not substance). Truncate the prose, mix in some lay terms, and get over yourself.

originally posted by: Astrocyte
Its not hard to imagine how evolution unfolds from these facts. Life is based in symmetry, or continuity, between the self-organizing and self-enclosed structure, and the meanings that its intrinsic "neediness" i.e. tendency to dissolve, generate affects (such as hunger) which drive the system (it's mind and body) towards a world that represents the salient objects that correlate with relaxing the stresses of the state in question (hunger, and so, a burger is found).

If life were based on symmetry nothing new would ever be invented. The funny thing about knowledge is the more you know the less you know. As far as I can tell life is a one way arrow from birth to death where the meaning we associate with it is purely subjective and self-defining.

Astroctye, you sure are obsessed with words. For many people, much of what they experience occurs outside the mind. Your point of view is in such a deep place most people have no chance to relate to anything you are saying.

I identify as a Gnostic. I was raised as a Jesuit Catholic. My hometown is as Jesuit as it gets... except the Maronites... long story, for another thread. I shed my Catholic identity years ago. Why?

...because I believe that the true beauty of Christianity has been suppressed. Gnosticism was dangerous, because it had no structure... and the belief that anyone can commune with Christ without an intermediary... no priests, bishops... no Popes... no control system.

The great thing about being a Gnostic, and not a Catholic... I can read your posts, and not need to go to confession

I love your posts, my friend... always well written, and thought provoking