originally posted by: theantediluvian
All sorts of interesting details in here. 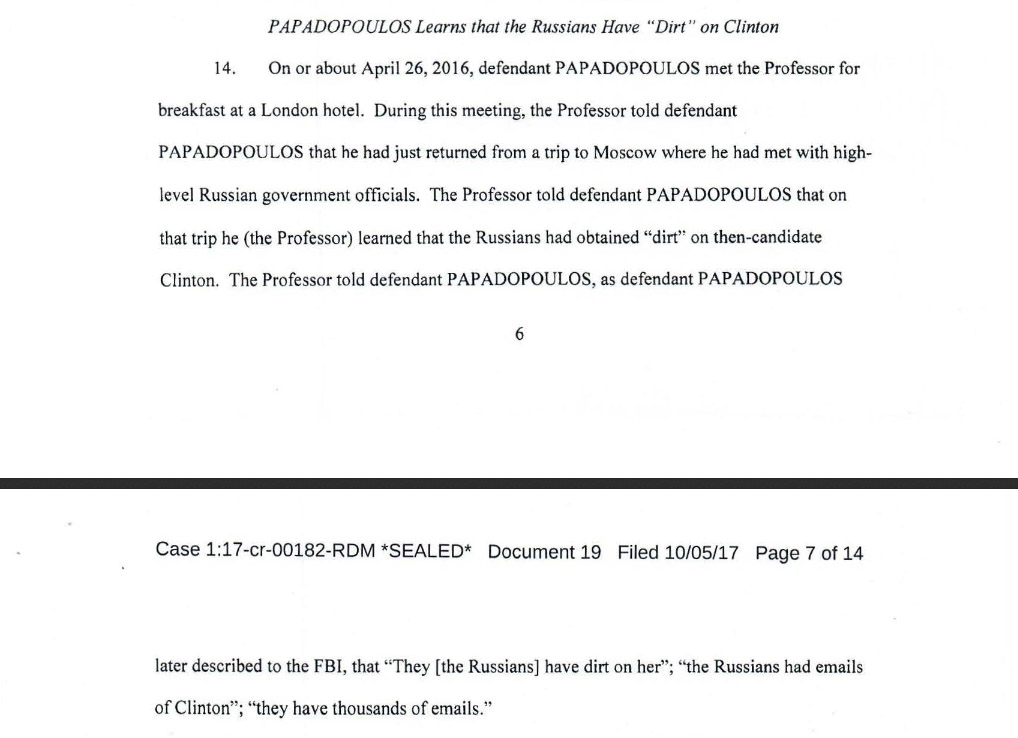 That kind of pokes a hole in the "emails didn't come from Russia!" narrative.

The fact that this guy apparently stated in the meeting between foreign policy advisors and Trump that he could arrange a meeting with Putin kinda pokes a hole in Trump's blanket denial too.

Here's who Donald Trump is taking foreign policy advice from

The fact that this guy apparently stated in the meeting between foreign policy advisors and Trump that he could arrange a meeting with Putin kinda pokes a hole in Trump's blanket denial too.

I can only imagine the panic in the white house at the moment, everyone rushing to twist and spin Trumps blanket denial into something else. It's not every day the president is proved to be a liar through court documents.

posted on Oct, 30 2017 @ 11:15 AM
link
I'll just leave this here. Whole lot of nothing. If anything he did was illegal I think he would've been charged with something besides lying.

You have been steadfastly ignoring any possible russian influence on dems, even going so far as accusing anyone who wanted to look at that info as traitors.

I and others on the other hand have been calling for investigations of ALL malfeasance involving Russia.

I even made a thread on why I think this is a big deal against Trump.

On the other hand, have you commented on the others accused of peddling russian influence on the Manafort indictment, Comapny A and B?

Oh you are suspiciously silent on that.

You were so pumped for Muellers indictment

I wonder why you would ignore certain parts of it....

originally posted by: theantediluvian
All sorts of interesting details in here.

To me, this is the most relevant point.

Regardless of rather or not Russia did have the emails, George here thought they did, attempted off the record meetings to get them, and apparently informed others in Trumps campaign that he was doing this and they thought it was great.

Now this does not prove Russia had the emails.

However, Trump had to know that this was occurring. Period.

Now the meeting to get emails apparently never happened (to our knowledge yet), so maybe Trump or a high fficial ultimately thought better of it.

But that means that Trump knew that there was an offer from russians, rather real of fake, to give dirt on Hillary, and he has acted like to even suggest such a thing was ridiculous.

And that is shameful in my opinion.

This is why I wanted the mueller investigation to continue.

Lets assume for aa moment that Mueller is biased. All that means is that he shouldnt be going after the other side if they did anything (which I am still hoping he does).

However, even if he is in Hillarys pocket, that does nothing, ABSOLUTELY NOTHING, to discredit this evidence.

This was all admitted by George.

Stop constantly deflecting back to the dems. They'll get their turn. This is about the Trump admin, as it should be.

The DNC and washed up politicians like Hillary are secondary. Hillary isn't president, so whatever she or the DNC has done should take a backseat to what the commander (now blatant liar) in chief's campaign has done.

originally posted by: face23785
I'll just leave this here. Whole lot of nothing. If anything he did was illegal I think he would've been charged with something besides lying.

He cut a deal & is a cooperating witness in an ongoing criminal investigation.

Let's not ignore the details of that part of the document that both contradict the Tucker Carlson promoted allegations and lack of details that substantiate it as you're clearly implying that either Company A or Company B is the Podesta Group (which is quite possibly the case).

It says that Manafort was responsible for communicating with Yanukovych and Gates for passing directions to Company A and Company B. Which does not sound like Manafort being at the Podesta Group weekly.

22. At the direction of MANAFORT and GATES, Company A and Company B engaged in extensive lobbying. Among other things, they lobbied multiple Members of Congress and their staffs about Ukraine sanctions, the validity of Ukraine elections, and the propriety of Yanukov's imprisoning of his presidential rival, Yulia Tymoshenko (who had served as Ukraine President prior to Yanukovych). MANAFORT and GATES also lobbied in connection with the roll out of a report concerning the Tymoshenko trial commissioned by the Government of Ukraine. MANAFORT and GATES used one of their offshore accounts to funnel $4 million to pay secretly for the report.

Multiple members of Congress? Did Tucker Carlson's source say anything about any of that? No mention of lobbying the State Department or more generally, the administration. There is a mention of weekly phone calls and one reference to "communicating directly with United States officials in connection with this work" but that's a list of actions taken by Manafort and Gates and "United States officials" is about as generic as it gets.

In fact, Tucker Carlson's source didn't mention Gates at all, did he? That seems to me to be a pretty conspicuous plot hole.

If President Trump is proven guilty, then I am all for this.


However, this is put up or shut up time folks.

Trump had a private DINNER with Comey later that SAME EVENING ... asking for "loyalty" ...

Not mentioning Gates doesnt prove much to me. Manafort was in charge.

26. In fact, MANAFORT and GATES had: selected Company A and Company engaged in
weekly scheduled calls and frequent emails with Company A and Company to provide them
directions as to specific lobbying steps that should be taken; sought and received detailed oral and
written reports from these ?rms on the lobbying work they had performed; communicated with
Yanukovych to brief him on their lobbying efforts; both congratulated and reprimanded Company
A and Company on their lobbying work; communicated directly with United States officials in
connection with this work; and paid the lobbying ?rms over $2 million from offshore accounts
they controlled, among other things. In addition, court?authorized searches of MANAFORT and
DMI email accounts and Virginia residence in July 2017 revealed
numerous documents, including documents related to lobbying, which were more than thirty?days
old at the time of the November 2016 letter to the Department of Justice.

They were communicating weekly with these groups, and steering everything they did, just as tuckers source said.

Tucker also said that the insider siad that members of congress were meeting the Podesta group, just as the indictement says.

Now this does not prove Russia had the emails.

No, it does not. There's also no proof that "the Professor" and the female Russian national actually could provide what they said from what I'm seeing either. They didn't actually setup a meeting with the Russian ambassador for instance.

But it does have some parallels with the Don Jr meeting fiasco.

But that means that Trump knew that there was an offer from russians, rather real of fake, to give dirt on Hillary, and he has acted like to even suggest such a thing was ridiculous.

And that is shameful in my opinion.

Shameful but in terms of practical consequences? Not much. Maybe a few percentage points more of the public will roll their eyes when Trump says he had no knowledge of anything relating to Russia, etc.

As with Don Jr's meeting, it doesn't look as though anything was ever produced. Also, no evidence of any meetings involving anyone but Papadopolous and these two Russians.

I'll have to review Carlson's source's claims again. And I'm not disputing that these firms worked entirely at the direction of Manafort/Gates in their lobbying efforts.

It sounds like me to that there might be enough that there's a case that Podesta Group knowingly lobbied for a foreign government (Ukraine) and didn't file as foreign agents, which as we all know is illegal.

I don't know which is which, but Company A and Company B are almost certainly Podesta Group and Mercury. Have you read this 2014 piece from The Daily Beast?

The two firms that got the ECFMU contract are the Podesta Group, which is run by the brother of White House special counselor John Podesta, Tony; and Mercury, a public relations firm staffed by former GOP Congressman Vin Weber and other Republican lobbyists.

Ed Kutler, a lobbyist representing the ECFMU for Mercury told the Daily Beast, “We are waiting to see what happens on the ground in Ukraine. But we are still talking to staff and think tank people who come to us and ask us what is happening in the Ukraine. The fact is every five minutes there is a new headline and obviously a changing situation and we need to see how events settle in.” "We’re awaiting guidance from the European Centre for what if any work they have for us in the future,” said one source in Washington familiar with the lobbying efforts from the two groups. Another former lobbyist for the Centre told The Daily Beast the account was now in up in the air.


These sources say the last major push from the ECFMU lobbyists was in the fall when they pressed lawmakers to oppose a resolution from Sen. Richard Durbin, the Senate Majority Whip, calling for the release of Yulia Tymoshenko, the former Ukrainian prime minister who was convicted and jailed in 2011 under the Yanukovych regime on corruption charges. On Feb. 22 she was released from prison.

That seems to match up perfectly doesn't it?

Yes it does all seem to be adding up.

Now tony podesta has just stepped down because of the Mueller investigation.