Is America's decline a foregone conclusion?


Is it too late for America to change direction?

If divide and conquer prevails yes.
If Americans stop hating each other polarity reversed...


Technology and advancement doesn’t start in earnest again until society turns secular.. and when it does within 2 centuries

As per your usual self you spout rubbish


The Italian Renaissance (Italian: Rinascimento [rinaʃʃiˈmento]) was the earliest manifestation of the general European Renaissance, a period of great cultural change and achievement that began in Italy during the 14th century (Trecento) and lasted until the 17th century (Seicento), marking the transition between Medieval and Modern Europe

originally posted by: JoshuaCox
The Athenians just paid lip service to their pantheon, but none of the great thinkers truely believed.. or if they did. They didn’t think humanity could influence the gods much so we were on our on.

And Greek technology and culture flourished..

Then came the romans who returned to a little more religious of a culture and advancement kinda plateaus. In Rome’s early days technology flourished, but by its peak tech doesn’t improve much, but they make a whole lot of it.

Then enter Christianity and the belief that humanity is irrelevant and everything is part of gods plan. Then the all advancement in technology basiclly stops.

The Roman Empire splits and falls leading to the dark and Middle Ages where pretty much only armor and weaponry improved. FOR A THOUSAND YEARS!!!

The Dark Ages was a lack of empire across Europe. Which is a totally different discussion.

I could go on and on in many different tangents about your words, but I'll wrap it up real quick like:

Technological progress during the (Muslim) Ottoman's.


Then 1000 years later 3-5 thousand Vikings bye lay waste to all of England..

History of Britain isn't your strong point is it ?

No The Vikings dint " lay waste to all of England "

As this map illustrates. 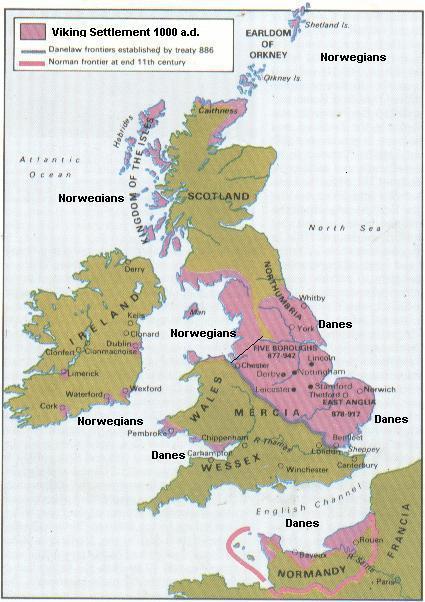 originally posted by: Mach2
a reply to: intrptr

Greed does seem to be the "beginning of the end". But empire are usually not born of greed. That comes a couple generations later.

There are various cycles of civilization, prosperity (which scale to cities, regions and countries). One is the Tytler cycle:
www.reddit.com...

In this cycle, a civilization becomes wealthy and complacent. Then things go downhill once PIG's start forming (PIG = Personal Interest Groups). Then everyone has a sense of entitlement, freedom is centralized, then there is revolution and a renaissance which then provides prosperity and then wealth again. We seem to be at this stage now with all those different groups (BLM, Antifa, WLM, ...)

Civilizationals have survived in the past because they were militarily stronger than their neighbors and could maintain their borders. Complacency would lead to them being out-teched by their neighbors. The Roman Empire was at their peak when they could control the Mediterranean with their warships .. But once their neighbors caught up they lost that disadvantage.

There are also economy and housing market cycles:

These are similar in that they are related to emotions (hope, optimism, depression) and wealth.

The United States has conquered the whole world.

Rome and Greece as well fell from outside attackers, not just political strife inside.

There is no one left to attack the United States externally. Made up boogie men don't count.

posted on Oct, 29 2017 @ 09:17 PM
link
No, it's not impossible, but I personally consider it unlikely. Not unless the powerful are truly held accountable by the people, and the corrupt tried and hanged.

There are so many things that could do it. Our economy is foremost in my mind. A very close second is how badly we have failed and how far removed we are from the form and system of government we were meant to have.

Were it not for the need to protect us from foreign aggressors, the Articles of the Confederation were good enough. We would have done just fine with those alone. However, our founding fathers knew we needed to be able to protect our new nation so a slightly modified version was created which allowed for taxation for the purpose of maintaining a standing army with proper provisions. It went almost without saying that the Federal government was not meant to interfere in the minutia of our daily lives in even the slightest degree. Even the states were not meant to measure our every step but only provide the infrastructure for its constituents. Something the Federal government could not do with blanket legislation that applied equally and fairly to such diverse areas and population.

Yet look where we are now. The Federal government interferes in virtually every aspect of our daily lives, regulating, monitoring, assessing, taxing, criminalizing, at will, with no recourse for the common man but to accept it or elect another criminal to replace the last one who failed us. And when the defecation does finally contact the rotary oscillator, whom do you think the government is going to try to save? I guarantee it won't be us. We are the first wall between the flying feces and them, and nothing more.
edit on 29-10-2017 by Vroomfondel because: (no reason given)

A) the renaissance didn’t change much.. the big leaps in wide soread advancement cane later.

B) it’s actually an example of what I am saying because that is when the church started losing dominion over the monarchies.

The renaissance is a bump compared to the warp speed advancement that has taken place since society went secular and stopped chasing witches and demons.

Literally at the same time as all the scientists stopped believing in Christianity. We go from the horse and buggy to the moon.


It’s not hard to figure out. Even the smartest scientists of the past stopped being curious the second they thought “well this must be where god comes in.”

Sir isaac newton did most of the heavy lifting of plotting out the solar system, but didn’t finish the job because he thought he had hit the god wall. The point where experimentation is useless because”god did it!”

The celts(I think it would have been the celts) with 1000 years less advancement kicked out ceaser with a legion...

( honestly I just heard that the conservative estimates for the first heathen army were 3-5000 and that blew my mind....

How far had society fallen when a thousand years before that the Roman Empire went from Losing 80,000 men at Cannea and still kept on trucking. )

I’m not blaming the fall of the Roman Empire on Christianity completely, but it absolutely happened on Christianities watch.
I heard a pretty convincing argument from my law professor toeing the belief in an all controlling god to the civilizational plateaus.


Every year someone starts a thread with your question. The answer is, only hindsight will tell if 2017 America was in a Growth/Maturity/Decline stage.

Empires typically don't go down easily. Nearing their end they tend to fight it and lash out as a response to their end being in sight.

So a better question is to what degree is the American Empire going to fight it's demise and will they bring down others with them in their fall.

I think it is rather more important to answer the question:

"If it is not too late for America to change direction, do the people have the will necessary to make it happen, and the intellect required to make choices which promote that change?"

I know that SOME Americans absolutely do have that will, and that intellect, both of which are necessary in order that change be for the better, not the worse, that the change be actual change. However, do most? I would say that any nation, half of the population of which could be enticed to vote for Trump, is pretty much doomed in that respect. There were no intellectually valid reasons to vote for Trump, and many moral objections a reasonable person would have to the notion of placing a checkmark in his box. That half of people managed to fail their nation in this regard, indicates that positive change, for the genuine betterment of the United States and its people, is not possible, given the fact that half of the country are so easily duped, by a man who exemplifies everything that is wrong with the country, not the things which are good, decent and noble about it.

Keep clutching, it makes you look ignorant and foolish. You can't even keep an argument up without bringing some tenuous link between the failures of science or lack of progress "because of religion"

As i stated previously your knowledge of the history of England is somewhat limited.

In the time of the Viking invasion, there was no such country as England. The land that became England was a set of individual " Kingdoms ". Those where East Anglia, Northumbria, Wessex, Kent, Essex, Sussex, Mercia and Dumnonia.

Those kingdoms had their own individual rulers or " Kings ". They had their own self interests and they certainly didn't have a combined army of all the kingdoms.

England came together as one nation around 1014. The only invasion of The Vikings after that date was in 1066. The Viking invasion was defeated at " The Battle Of Stamford Bridge " by a combined English Army

The United States has conquered the whole world.

Rome and Greece as well fell from outside attackers, not just political strife inside.

There is no one left to attack the United States externally. Made up boogie men don't count.


Rome started to fall because of a ideological rift that spread like wildfire from an underground religion, which later turned out to be Christianity.
And then when that happened, it got even worse and split the empire into two, once the empire was destabilized from within then outside invaders took advantage, because it was the world police at the time.

Rome is a prime example of what Lincoln stated about a nation divided on itself is not a nation at all, and cannot stand.
The US almost became such a nation, and it can happen again, and from the looks of how things are going, it has potential to come to fruition.

posted on Oct, 30 2017 @ 09:18 AM
link
America as we know it is probably finished, the only question is what will we finish morphing into will we swing further left or back to the right seems to be the last question.

Either way judging by the recent past the Constitution is in for a rough ride.