The extraordinary weather occurrence is caused by electrical bursts of light above highly active thunderstorms, and appears as jellyfish-shaped clusters of red light.

Red sprites are rarely seen, yet one lucky videographer managed to catch the display six times during a storm earlier this month over Edmond, Oklahoma.

The mysterious electrical bursts occur over highly active thunderstorms around 37 to 56 miles (50 to 60 kilometres) above Earth, and are rarely observed from land or space, due to their high altitudes and millisecond durations.

The stunning sight is captured not only once, but a staggering six times by Mr Smith, who was left 'stunned' by the magnificent encounter. 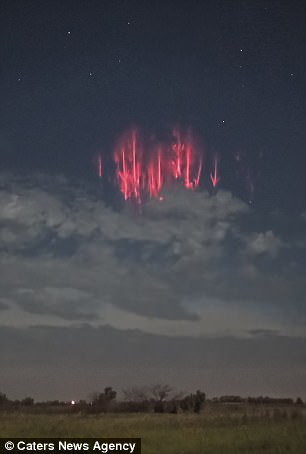 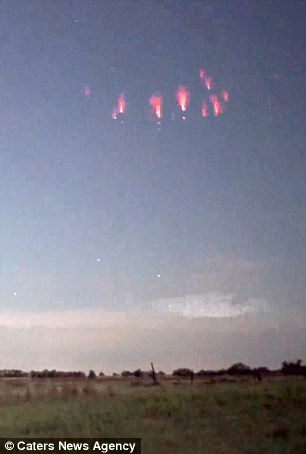 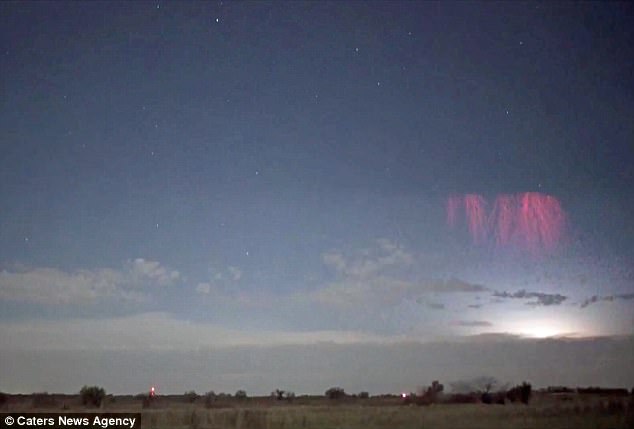 Video of the captures:


I haven't personally seen the kinds of amazing thunderstorms, but perhaps one day I will and be able to experience my own observational sets of these magnificent red sprites!

The trick to capturing these, one must assume, is to be far enough away from the storm that the clouds do not obscure the view, and on land flat enough from horizon to horizon, that ones view will not be obstructed by trees, houses or natural elements of the topography.

Stunning shots, in any case! Fantastic snapping, and a good find on your part Skywatcher2011! Thanks for sharing them!

posted on Oct, 23 2017 @ 11:21 AM
link
Thank you for the comments! And TB you are right...your capture description of these RS's makes sense. Also having a tripod stand to help stabilize the capture would help. and maybe a case of beer too

The trick to capturing these, one must assume, is to be far enough away from the storm that the clouds do not obscure the view, and on land flat enough from horizon to horizon, that ones view will not be obstructed by trees, houses or natural elements of the topography.


I thought these were only observable from space? Up till now? How many other photographers have captured sprites from ground level?


Just kidding if I was filming that phenomena also my enthusiasm would be the same! Thanks for sharing!

Sprites, also known as red lightning, are electrical discharges that appear as bursts of red light above clouds during thunderstorms.Because the weather phenomenon is so fleeting (sprites flash for just milliseconds) and for the most part not visible from the ground, they are difficult to observe and even more difficult to photograph, rather like the mischievous air spirits of the fantasy realm that they’re named for. Ahrns and his colleagues, however, have captured extremely rare photographs of the red lightning, using DSLR cameras and high speed video cameras positioned in the plane’s window. The researchers hope to learn more about the physical and chemical processes that give rise to sprites and other forms of upper atmospheric lightning.

posted on Oct, 23 2017 @ 02:58 PM
link
Well, one thing seems to stand out, and that is it seems like there is a downward thrust to whatever the chemical/electric reaction is.

originally posted by: abeverage
All I can say is "YES" lol


Just kidding if I was filming that phenomena also my enthusiasm would be the same! Thanks for sharing!


sprites appear during my love making and the word YES is stated quite often by her heheh
edit on 23-10-2017 by Skywatcher2011 because: (no reason given)

originally posted by: smurfy
Well, one thing seems to stand out, and that is it seems like there is a downward thrust to whatever the chemical/electric reaction is.

I guess they would call that a voltage gradient. The clouds gain a positive charge, while the ground and air above have a negative charge. Then the electromagnetic field formed by a lightning bolt sends a charge in both directions. That's enough to ionize the air above forming red sprites (ionized nitrogen generates red)

So glad to see this.

I'd never heard of this or seen it. Then I saw a similar article in the 'Sun' and thought to post it but then again - thought again - Nay, this can't be more but fake news.

What a delight it is not!

Talk about signs in the heaven's!

The last guy I heard of was in a home built onto a mountainside, which he had either rented or purchased specifically to make observations at high altitudes. Its not necessary to be in space to see the sprites, but its EASIER to see them from the ISS, purely because the ISS is always in a position to look down from above the clouds, whereas, most mountains of the habitable variety, are small enough that even despite their size, clouds will sometimes wrap themselves around the viewing point, obscuring all details from view.

Thanks, I could see in the examples the lightning storms were far off on the horizon and the viewing conditions pristine, especially directly above the lightning.

I was sort of wondering since I been around a while how come this wasn't capture previously. Seemed to only be recently discovered from space.

The 60', 70's 80's, nada. I used to read Omni and Nat Geo, saw all the space stuff on tv I could. Sprites became realized later on, but now guys are recording it.

originally posted by: silo13
a reply to: Skywatcher2011

So glad to see this.

That is why I am a skywatcher! I love seeing the amazing things in the sky. From rainbows, weird cloud formations, and UFO's to incredible storms producing amazing spectacles.

We humans tend to look forward but we often forget to look up!

Keep your eyes up