The height of irony for CNN - featuring Bannon speech at GOP convention. 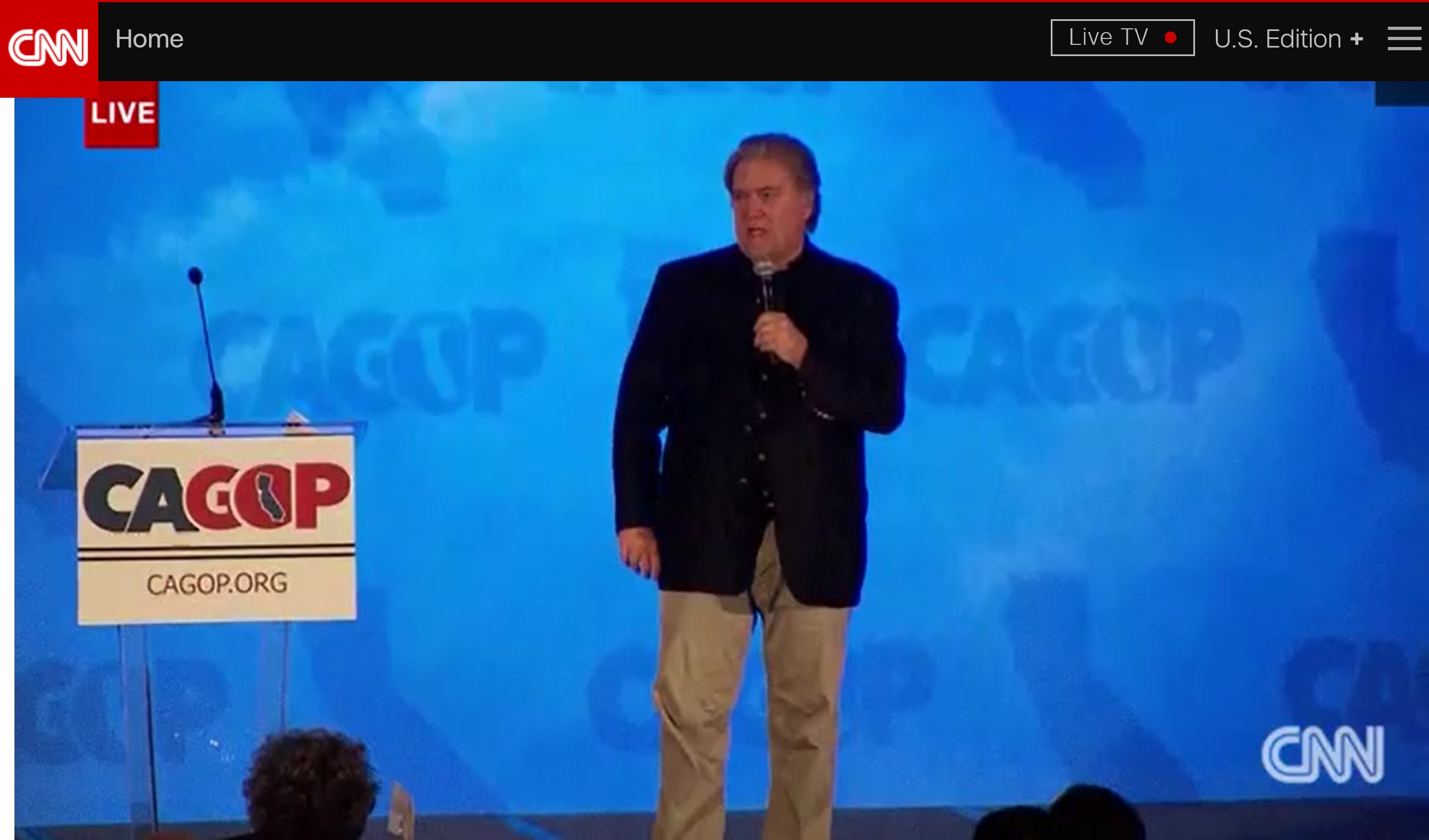 OMG they just removed it.

Had a Top Banner pointing to it the Live Speech, I was watching, now it's gone someone ordered it taken down!

I got a screenshot.

As I watched Bannon's reasonable propositions on CNN, the irony of it struck me, so I pressed PrintScreen.

I can't seem to find it on their site now... nope, they took it down. He was starting to make too much sense...

It was quite captivating. They must have seen the spike in viewers and hit the panic button.. LOL!

I think it's funny, maybe it's just me I don't know.

..resuming normal programming. The 10 minutes of hate will be as scheduled, every ten minutes. Stay tuned..?

posted on Oct, 21 2017 @ 12:19 AM
link
Could you elaborate on what exactly was going on? Kinda in the dark since there's no video or link to reference.

originally posted by: Alien Abduct
a reply to: AnkhMorpork

I was watching live, but made a copy/paste error when trying to pick up the URL to post here, went back right away and it was gone. Poof.

It doesn't take Sherlock Holmes to see what happened there.

Who knows, maybe Bannon himself might point it out, how he was live streaming top of CNN during his speech and then... he wasn't any more because someone put a quick stop to it, to silence his voice.

Cool. I captured it in real time, before it was gone, and not 10 seconds later on a reset to their home page to bring it back up, and poof, it had vanished.

A banner had popped up and it had it's own window, and he was really on a roll let me tell you, and it was fascinating and was probably starting to capture a lot of viewers.

I googled for a live stream and there was nothing on Google, not the first 10 pages of returns anyway. Nothing anywhere, not on CNN, not on the net.

I'm sure it was being recorded and we'll see it turn up somewhere, his speech today.

It's kind of fun watching the way that CNN started to cover it as the only live stream source anywhere on the net, for a bit.

Maybe there's a political split at CNN and a creepy mockingbird leftist collectivist with more power won this one..

That's the way it appears to me.

originally posted by: confound
Could you elaborate on what exactly was going on? Kinda in the dark since there's no video or link to reference.

originally posted by: Alien Abduct
a reply to: AnkhMorpork

I followed the Banner Alert up top, and it was a livestream of his speech, and I was about to capture the URL and post it here but made a stupid copy-paste error, went back and it was gone. Have looked through CNN, and on Google for another source of the Live Stream and there's nothing.

Steve Bannon is on a roll let me tell you. It was a great speech and presentation, while it lasted.

I don't believe you. I think your screenshot is cgi. CNN would never do this. You should repent, recant and apologize.

That's a clip from it, but no, it was the live speech itself.

originally posted by: Phage
a reply to: AnkhMorpork

I wouldn't go quite that far, but he was starting to lay out a three point strategy for winning. Number one was having authentic people run for office, no blow dried candidates. Number two was to have BOLD ideas. And number three... that was when I sat up, noticed that I was watching this on CNN, and after pressing Printscreen, fumbled my copy past of the URL for the OP, and it was gone.

He was on a roll though yeah. I found his arguments more compelling than Saul Alinsky's "Rules for Radicals" a favorite of Obama and Clinton and that weird looking dude who runs "Correct the Record", a book which, on it's first page offers a dedication to the devil and his rebellion.

originally posted by: Phage
a reply to: AnkhMorpork

More of an authentic conversation than a speech.

Whereas when Obama stood up or was propped up again on the "campaign trail" (don't understand that headline), he was so faux Obama. It was so contrived, even right down to his stutters.

It's all about image consciousness and working to simply try to yank people's chain and get a rah rah back while basking in the limelight.

It's very funny for anyone who can see and use their evaluative discernment and judgement.

I know of a way to win, but it's SOOO powerful that I hesitate to toss it out like pearl's before swine.

I'm going to write a letter about it and send it to Steve Bannon. He'll grok it and understand it perfectly well, and he'll implement it.

Obama's tired and lame use of NLP principals to manipulate and coerce is dead. Why? Number 1 because it's inauthentic, and there's another side to it, a very dark and sinister side that runs like a racket in the backroom.

It's no longer tolerable. We've awakened and we're too smart to be taken in by that nonsense any more.

To operate effectively in the psychological domain is to operate from the spiritual one, and you just can't mimic that. lol

It simply must be based on spiritual and universal principals of civil liberty, that's the narrative.

Whoever fully understands it and lives and speaks from it, from the authentic place of legitimate concern for one's nation, and not only it's economic concerns, but also it's spiritual concerns; they own the ground.

I think Bannon understands it to a large degree, and I'm going to write him a letter so he'll understand it fully and completely, how even trying to fly under the banner of "Economic Nationalism" that this doesn't even begin to sum it up, what's really going on and what people are really wanting to see in regards to their representation and leadership.

I'm going to send an arrow and it's going to fly fast and far to it's mark, but first I need to go out for breakfast and celebrate.

Nationalism is our form of incest, is our idolatry, is our insanity. ”Patriotism” is its cult. It should hardly be necessary to say, that by ”patriotism” I mean that attitude which puts the own nation above humanity, above the principles of truth and justice; not the loving interest in one’s own nation, which is the concern with the nation’s spiritual as much as with its material welfare –never with its power over other nations. Just as love for one individual which excludes the love for others is not love, love for one’s country which is not part of one’s love for humanity is not love, but idolatrous worship.
ERICH FROMM, The Sane Society

So you were mistaken about a) Bannon's "voice" being silenced as well as b) some "left wing" conspiracy at CNN to do so?

Should you acknowledge that you were severely mistaken in these comments?

So you were mistaken about a) Bannon's "voice" being silenced as well as b) some "left wing" conspiracy at CNN to do so?

Should you acknowledge that you were severely mistaken in these comments?

No, not at all. They were featuring it, then dropped it like a hot potato.