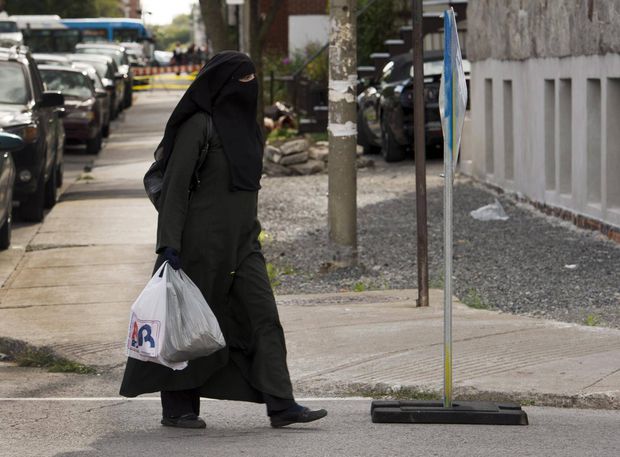 Quebec has adopted a law that will force people to show their faces when taking the bus or borrowing a book from the library, pushing ahead with legislation that is being criticized for targeting Muslim Canadian women.

Bill 62, which the Justice Minister described as a North American first, requires one's face to be uncovered when giving or receiving public services.

The Justice Minister, Stéphanie Vallée, confirmed that the law would apply to anyone taking a city bus. "To take public transit, you have to have your face uncovered. All through the ride," Ms. Vallée said on Wednesday.

The Liberals used their majority in the Quebec National Assembly to adopt the law on Wednesday, 66 to 51.

The legislation is already being criticized by Muslim organizations, civil-rights groups and Montreal Mayor Denis Coderre, whose city will bear the brunt of the law's provisions as home to most of Quebec's immigrants. He called the idea of a city librarian turning away a woman in a face covering "totally unacceptable."

Legal experts say they expect the law to be challenged in court.

The first sitting of this proposal was held June 10, 2015, so this wasn't just a quick proposal.

The previous title to Bill 62 was:

"An Act to foster adherence to State religious neutrality and, in particular, to provide a framework for religious accommodation requests in certain bodies"

The newly modified Bill 62 is:

"An Act to foster adherence to State religious neutrality and, in particular, to provide a framework for requests for accommodations on religious grounds in certain bodies"

Now Quebecians have a tolerance for diversity and multiculturalism. But when society there deems that it is in the best interest of the public to have your face shown in the public sector for safety and identification purposes.

I personally don't disagree with this Bill nor do I agree with it...but for me, and I am sure like most humans, we identify people based on their face. We have the need to recognize others. Eyes don't say much, but the face does.

I know that there will be politics swarming over this with a lot of Muslim and Human Rights organizations leading the way, but I am saying on the side that the Bill will be upheld in court.

I think this is a necessary move. While I understand the issue, at the same time it is highly necessary since covering faces can be a big issue especially since there are times when we need to identify faces.

It shouldn't apply only to Muslim women but to everyone no matter their religion so it can be fair.
edit on 10/19/2017 by starwarsisreal because: (no reason given)

Frankly, I don't know what to make of this. I think they've done the same thing in France? I dunno.

In some ways it seems very dictatorial and it only really discriminates against the Muslims. In another way, it could end up hurting "society" as you call it; as long as their wearing their goofy clothes........we know who they are and its easier to keep an eye out for them.

But what really makes me wonder is this: "The Liberals used their majority in the Quebec National Assembly to adopt the law on Wednesday, 66 to 51."................so......"Liberals"? Liberals in Quebec infringing freedoms and discriminating against an entire culture and its religious expression via clothing? Well, I get the religious expression thing, "Liberals", or are they really "Leftists" are almost uniformly activist atheist.

But this "Liberal" taking of freedoms makes it almost look like the "Liberals" are the modern day "Fascists", promoting government control of everything including what people wear.

I'm sorry but if I am lying on a surgery room table and have batman staring down at me I would surely be terrified. On the other hand I'd feel more comfortable being operated on by surgeon where you could at least see more eyes, ears, neck, etc...parts that we could put together and try to imagine the entirety of the face....kind of like this guy: 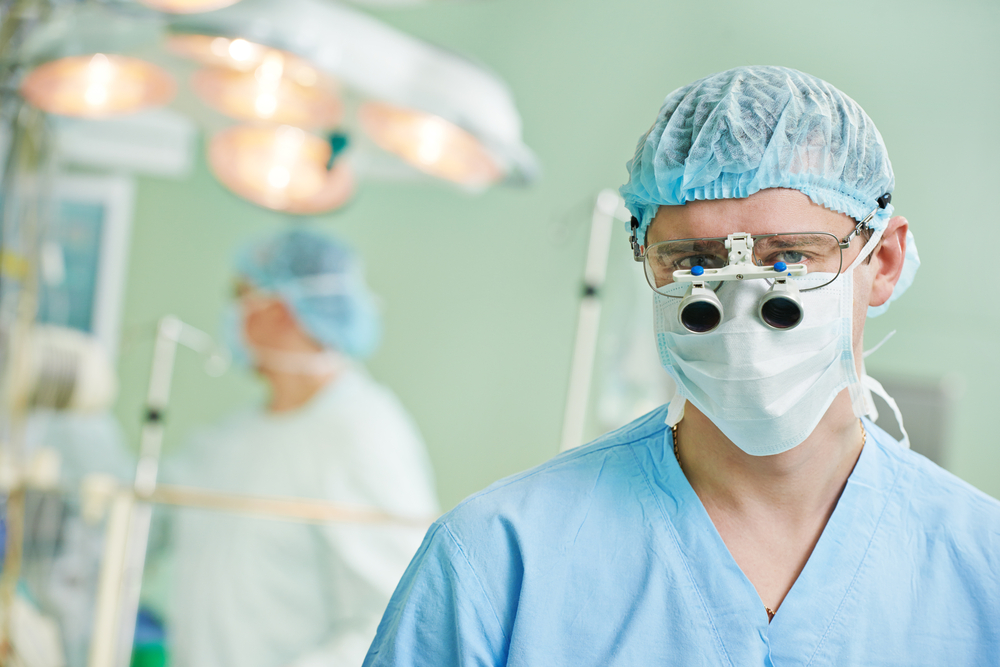 But honestly, I don't know if I would be more scared of someone operating in this gown: 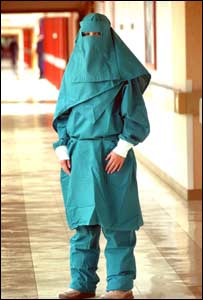 Or having the world's oldest surgeon in this gown: 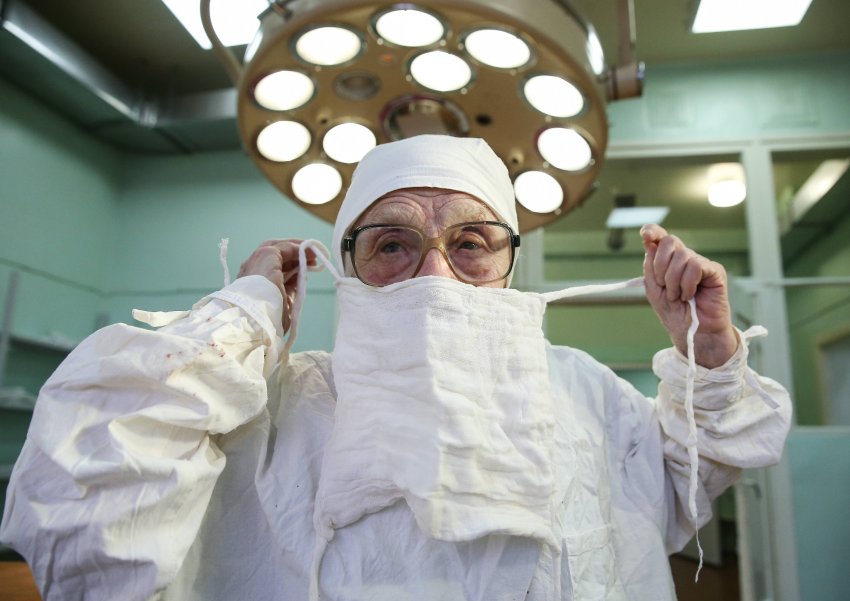 posted on Oct, 19 2017 @ 12:12 PM
link
Here in the UK you have to remove your crash helmet if entering any building like banks, petrol stations, supermarkets etc so why not? Its all about recognition and interacting with humans. Covering the women makes them invisible and destroys their identity. People find it very difficult to relate and communicate with an invisible being....well except God obviously

besides, when went to Muslim countries, i always adhered to their laws and policies.

i see no qualms with this rule.

First, you have to understand that it will be applied next year and that the Liberals will probably be the opposition by then, being able to oppose it... Yes, I know.

Since Charest and his friends took control, corruption has never been this high in the Belle Province.

And what about deaf people who have to read lips, they cant see their mouth they're at a disadvantage.

Why do liberals and muslim's hate deaf people?

posted on Oct, 19 2017 @ 12:27 PM
link
I think they should be required to show their face on their ID and I think businesses should be allowed to decide if face coverings will be allowed. Most businesses around here don't allow you to enter with your face covered due to security issues.

I ride motorcycles and usually have a full face helmet on. I take my helmet off when going into a bank or gas station for obvious reasons. A lot of barbershops near me don't allow hoodies.

I'm all for respecting people's religion, but when your religious beliefs interfere with daily business and security, it needs to take a back seat to common sense. If they don't like it, they can go back to whatever 'Stan country they are from as far as I am concerned.

Odd thing about that, isn't there.

Bank robbers who do the "run in shooting" type robbery almost universally break those rules even though they're posted in big print, plain sight on the front doors.


So why do a lot of Muslim women not wear burkas while those that have recently immigrated here wear burkas?

That shows the difference between being born Canadian vs being a landed immigrant. Two very different cultures and upbringing.
edit on 19-10-2017 by Skywatcher2011 because: (no reason given)


So why do a lot of Muslim women not wear burkas while those that have recently immigrated here wear burkas?

That shows the difference between being born Canadian vs being a landed immigrant. Two very different cultures and upbringing.

The question seems self-explanatory. Some follow the culture and some do not. Once again, I've seen numerous postings stating there are no requirements for burkas in the Koran.

Here's a link addressing the issue: