page: 1
50
<<   2  3 >>
log in
join
share:
theantediluvian
+29 more
posted on Oct, 16 2017 @ 03:00 PM
link
An expedition led by Natalia Polosmak, the Russian archaeologist notable for having discovered the Siberian Ice Maiden, has made a spectacular find in Kashmir.

The find was announced on October 12th by the state-run news agency RIA Novosti. Details haven't filtered down to many English-language outlets yet, so I'll excerpt the article as translated by Google. 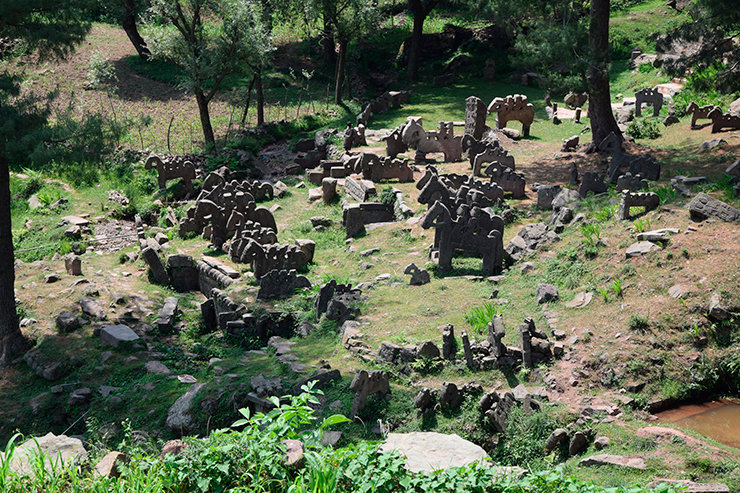 "Two ritual complexes were found here, it is far and high in the mountains, where it is not easy to get there." About 200 stone horsemen were found in the sanctuary, and their specificity is that sometimes not one person, but two, three or four people sit on a horse. That is, it is the embodiment of some mysteries and myths that are yet to be read: all these sculptures are voluminous, richly decorated with carvings, "Molodin said.

"It seems that everything has been known in India for a long time, but in fact, these things have been found for the first time." There is no publication on this, and the scientific community first learned about it. "The find shows that not everything is known to us on the planet. will have to be studied, "the scientist said.

Molodin said that according to the assessment of the head of the expedition Natalia Polosmak, the sculptures belong to the era of the early Middle Ages, that is, the beginning of our era. This is indicated by the decoration of horses and other details. "But what kind of population is this is a big problem, because there was nothing like it in the iconography in India before, it's some kind of population that suddenly appeared in the Himalayas, settled in hard-to-reach areas and left such a trace," expert. 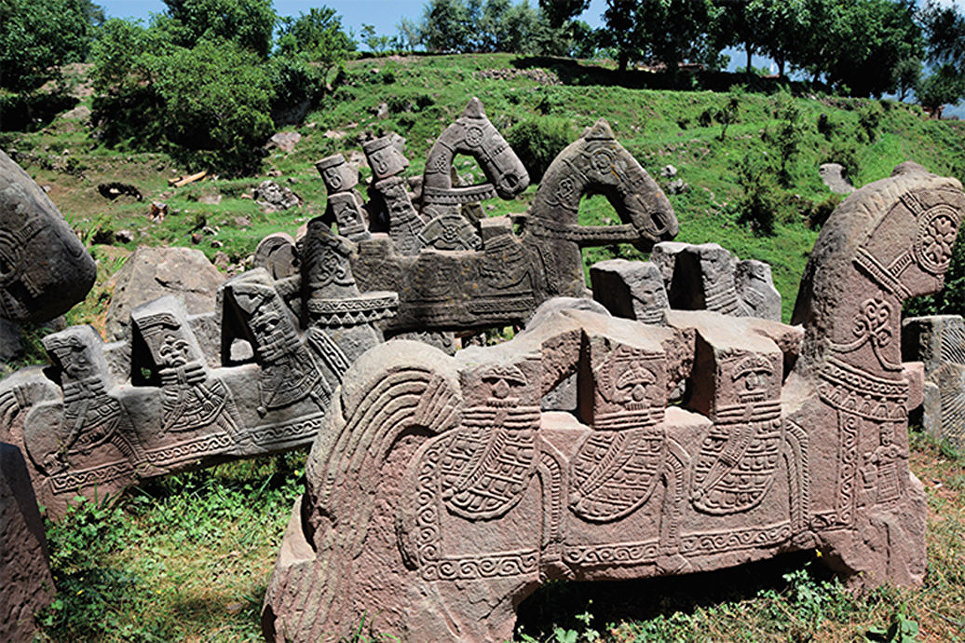 The comments come from Vyacheslav Molodin, deputy director of the Institute of Archeology and Ethnography of the Siberian Branch of the Russian Academy of Sciences (SB RAS). It's noted that at both sites, there are sources of water as well as accompanying stone structures for which no additional details are given.

They're identifying the sites as "ritual complexes" (of course) and dating them to 5th century CE based on decoration of the horses and "other details" which aren't mentioned. And here's where the "unknown origin" part of my title comes in:

"But what kind of population is this is a big problem, because there was nothing like it in the iconography in India before, it's some kind of population that suddenly appeared in the Himalayas, settled in hard-to-reach areas and left such a trace,"

Interestingly, the statues depict multiple riders per horse. From those I can see in the pictures, there appear to be three on each horse. Also worth noting is that many but not all are missing their heads. You can also make out parts of a wall and other structures in one of the pictures along with some large rectangular carved stones — one still standing and another on its side.

Fascinating!
edit on 2017-10-16 by theantediluvian because: (no reason given)

What's your gut instinct here? The statues are in a temperate area and show very little sign of erosion or even discolouration. The setting looks theatrical and small enough to arrange on a stage.

I'm thinking of something more recent than Medieval times and maybe something along the lines of a folly?

posted on Oct, 16 2017 @ 03:17 PM
link
Found another article in Nat Geo Russia (Google translated excerpt) which gives a possible hint to the civilization responsible for this stone army:

Ancient stone army was found in the Himalayas

In the summer of 2017, the Russian-Indian expedition, with the participation of specialists from the Institute of Archeology and Ethnography of the Siberian Branch of the RAS, worked in the Small Himalayas. In the mountains of Pir-Panjal, scientists found about two hundred stone sculptures of horsemen, plates with images of people and animals, stone pedestals and stone basins lined with stone slabs. Unique monuments were located directly on the surface of the earth. The fact that they were not discovered earlier is due to their location at an altitude of two thousand meters.

Statues of horses with two, three, and sometimes four horsemen executed with great care. The costume of warriors, their weapons, ornaments, horse equipment and harnesses amaze with an abundance of details, but the riders' faces are devoid of individuality: in each of them a generalized image of the warrior is transferred.


Himalayan sculptures reminded archaeologists of portraits found on Ephthalite coins: for this people are characterized by large features, a large long straight nose and a flat cut neck. The latter feature can be associated with the traditions of skull deformation adopted by a number of ancient tribes. Large round earrings in the ears of the riders also bring them closer to some images of Ephtalit rulers minted on coins.

Some details about the Hepthalite Empire from Wikipedia:

The Hephthalites (or Ephthalites) were a people of Central Asia who were militarily important circa 450-560. They were based in Bactria and expanded east to the Tarim Basin, west to Sogdia and south through Afghanistan to northern India. They were a tribal confederation and included both nomadic and urban, settled communities. They were part of the four major "Hunic" states known collectively as Xionites or "Hunas", being preceeded by the Kidarites, and succeeded by the Alchon Huns and lastly the Nezak Huns. The Sveta Huna or White Huns who invaded northern India are probably the Ephthalites, but the exact relation is not clear.

The stronghold of the Hephthalites was Tokharistan on the northern slopes of the Hindu Kush, in what is present-day northeastern Afghanistan. By 479, the Hephthalites had conquered Sogdia and driven the Kidarites westwards, and by 493 they had captured parts of present-day Dzungaria and the Tarim Basin in what is now Northwest China. They expanded into northwestern India as well.[6]

The sources for Hepthalite history are poor and historians' opinions differ. There is no king-list and historians are not sure how they arose or what language they spoke.

The origin of the name "Hephthalites" is unknown, but it may have come from a Khotanese word Hitala, itself borrowed from Uigur, meaning "Strong"


I agree. The two riders in the background have 'Mayan' profile like heads. The riders however are armed with curved swords. Arabic? Turkish?

Know what you mean. I am getting the same, as well as some Celtic imagery in there, as well.

Or for the sake of ATS, these people really pissed off Medusa.

My gut feeling is that it's legit and probably as old as they're speculating. The site actually looks pretty large. You can see terracing in the background of the one image. The weathering looks natural on the statues. You can also see where the horses downhill have accumulated a lot more soil around their legs than those uphill.

The stage thing has me thinking though. It looks like it's supposed to depict an event. My first thought was maybe it was commemorating a battle but that doesn't really add up either. 3-4 riders per horse? They do appear to have sheaths for daggers and if you look at the front riders on both the 2nd and 4th statues in the closer up image, there appear to be arms, possibly holding weapons.
edit on 2017-10-16 by theantediluvian because: (no reason given)

originally posted by: SlapMonkey
It's hard to tell from the two images that you embedded, but am I the only one that gets a Mayan feel in the way that those horses are decorated?


I was also thinking Gobekli Tepe.

originally posted by: theantediluvian
The stage thing has me thinking though. It looks like it's supposed to depict an event. My first thought was maybe it was commemorating a battle but that doesn't really add up either. 3-4 riders per horse?


Aftermath of a victory? Or defeat? Maybe some clever general hid the actual number of his troops by having them ride four to a horse and they slaughtered their enemies? Or soldiers returning home after a crushing defeat where nearly all their horses were killed? Mongols? They might look Mayan in a sculpture.
edit on 16-10-2017 by Blue Shift because: (no reason given)

I'll wait and see what other sources get around to saying as the story gets passed around.

I take your points and they make sense despite my reservations. There's weathering there and yet no bird poo or lichens and we might expect five centuries plus to show more wind/water erosion.

Yeah, me too, a bit. So many of the styles were so similar...

I wonder if they had to leave somewhere fast and the only way to move so many was to pile as many as a horse could carry?
It could be to commemorate their exodus?

Bit of a long shot but that's what springs to mind. Could it signify their journey before choosing to settle in that area? Any local legends regarding this type of movement? (Unlikely I know, but...?)

Yes I got a Mayan feel from them too, not sure why though.

I think it might have something to do with the parallel lines of the horse's tails. The heads have an almost Mesoamerican appearance with the stretch earlobes but I'd say more Incan than Mayan. The flat headgear reminds me of Tiwanaku (pre-Incan) but then again stretched earlobes have existed in cultures pretty much all over the world, flat hats aren't rare (assuming they're even hats at all an not stylized hair in a top knot or something — or that there's not parts missing).

I take your points and they make sense despite my reservations. There's weathering there and yet no bird poo or lichens and we might expect five centuries plus to show more wind/water erosion.

Fifteen centuries of weathering. I'd imagine that assessing the weathering would depend on a lot of factors though from the stone they're carved from and depth of the carvings to all the weather/climate and location specific variables. There's standing water in that pool in the one picture and everything looks green but it might not be quite that temperate all the time.

I'd really like to see more pictures but all I can find are the same two from the original article.

Yea I thought the same thing. Need to have a better look though.