Cali Wildfires couple who died together after having been married for 75 years. 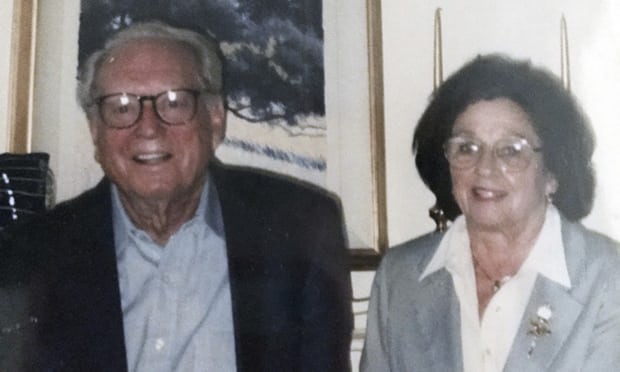 At least 17 people have been confirmed dead in the devastating wildfires raging in California —including a couple who died together after having been married for 75 years. Charles Rippey, 100, and Sara Rippey, 98, died Sunday night when a fast-moving wildfire engulfed their Napa County home. Mike Rippey, the oldest of their five children, tells ABC that his mother was paralyzed from a stroke years earlier and would never have made it out.
He says his father died about halfway to her room but "even if he had made it, there was no way he was gonna leave her. So neither one of them was getting out." "They lived a long life," he says. "It was a great life and they were happy right up until the last minute." In other developments:


So sad and lovely at once. Meaning - they didn't live, died together and they didn't have to suffer through the aftermath of loosing everything at such a late point in life.

With all the hard luck stories we're hearing from the victims of the fire in California I wanted to add a story, though sad and tragic does have a type of silver lining.

Rippey, 71, said he and his siblings couldn’t imagine how either parent would have navigated life if just one had survived the flames. “We knew there’s no way they would ever be happy, whoever was the last one. So they went together, and that’s the way it worked,” he said stoically.

posted on Oct, 11 2017 @ 12:33 PM
link
Aww, have they determined if the fire started or not? At least they lived a long life together, and went together. so romantic. Pretty sad how the fire spread so rapidly. rip. I hope they get under control soon.

I heard a caretaker was also in the home and barely escaped. Bittersweet story.

Wishing the best to those in the area and all others affected.

Interesting how the whole of state and federal emergency resources can't stop even peoples homes being destroyed. They go up and incinerate in a few minutes.

Imagine if a major city suffered a nuclear attack, the firestorms that would start in even one city, let alone a nation.

Imagine if a major city suffered a nuclear attack, the firestorms that would start in even one city, let alone a nation. 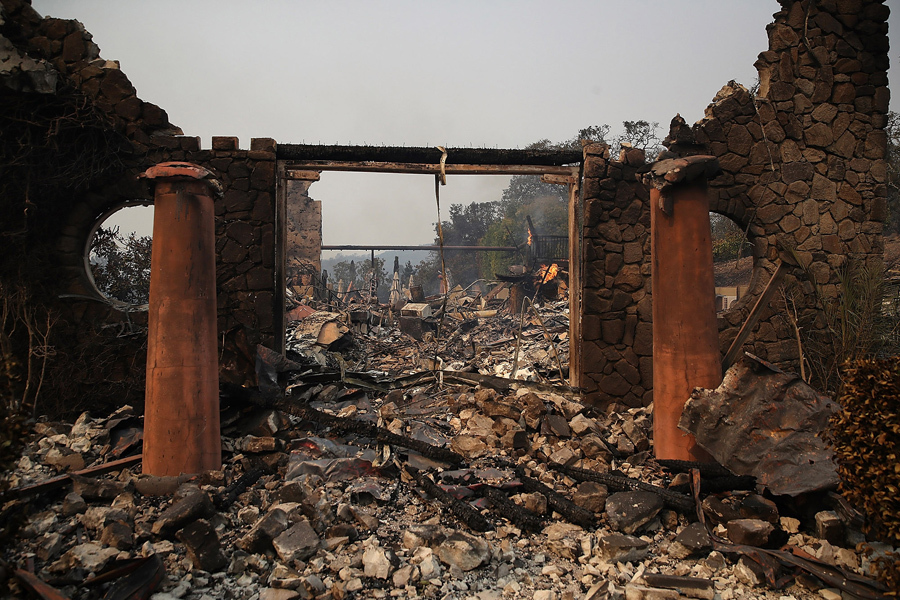 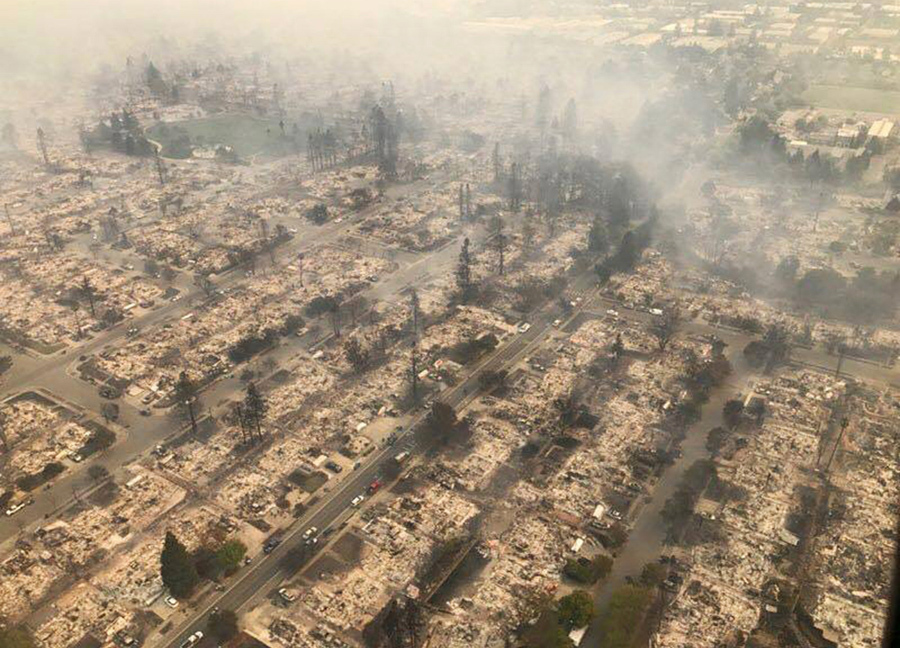 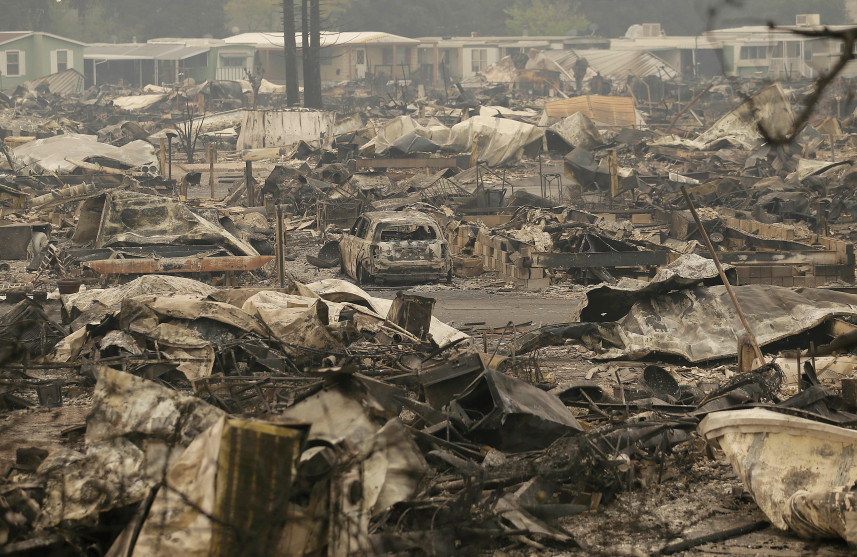 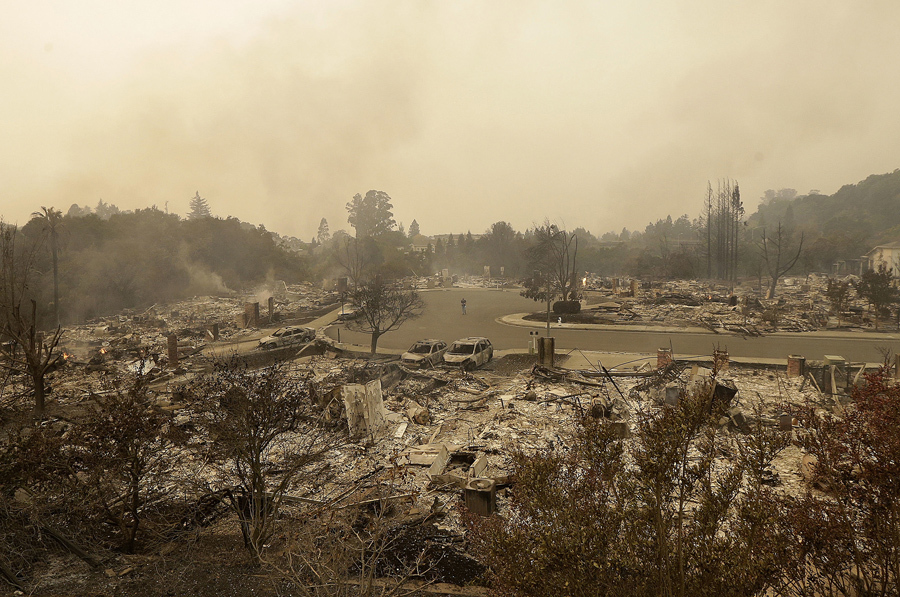 They are. Something like that doesn't just end. Loyalty. Love. The Universe/God, call it what you will, rewards that.

Long, hot dry drought drying out and killing lots of the previous growth for fuel, then a wetter spell that caused lots of new growth, now more hot dry conditions to dry that out for tinder.

Then you add in the horrible winds.

It was a disaster waiting to happen. Unfortunately, it did.

So very sad and so very tragic. At the same time, how many times do you see older married couples like this who end up going out at the same time or very, very close together? They don't want to go on without the other; they really are what the marriage ceremony says - two become one, and you can't live with only half of yourself.

posted on Oct, 11 2017 @ 03:38 PM
link
I don't have time to watch much news but listen on the radio on my way to and from work. So I know these fires are moving but I have known of these fires for what almost a week now?

If you know it may take some time to get your wife out of the home should you not plan that. Perhaps they decided to stay regardless of the fire, they were 100/98 years old.

People depend on government to warn them and don't think about whether they should take action for themselves.

Sometimes, events overtake the government's ability to act. This happened in the Smokey Mountain fire that hit Gatlinburg too.

If you don't pay attention and act or don't understand you should be acting, you get caught off guard and end up like these people in the truck, or, sadly, like this poor couple.

Thanks for the pics. They focus on small areas, to highlight the damage. 4000 structures is a lot but small potatoes compared to nuclear war.

The thing that amazed me most about some of the devastated areas is the trees are still standing, even with leaves on their branches. The houses though are just gone. Little left but rubble and ash. Materials used in construction are super flammable.

Most of the deaths occurred that first night. People were caught unawares in their sleep, were slow to react. By the time they did many became trapped. There are still hundreds unaccounted for.

I'm still trying to wrap my mind around this. Officially speaking, the explanations about origins are sparse.

I did find this. Initially the winds toppled power lines which started multiple small fires burning that quickly grew into large conflagrations driven by the same winds.

originally posted by: intrptr
The thing that amazed me most about some of the devastated areas is the trees are still standing


Trees are neutral and pro-NWO because surveillance devices can be attached to them.

Normally when a house burns, there is much debris left. A lot of the time, wooden frames are charred.

In this case, it was obviously so hot that houses turned to ash yet the plastic bins, wooden stump letter boxes, dry dead sticks below Pine trees are just doing fine.

Here is an idea for the Brave New World. Comply or Die. Time to get microwaved. 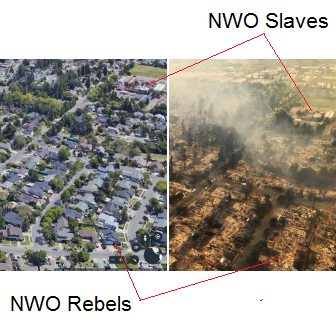 Trees are neutral and pro-NWO because surveillance devices can be attached to them.


Trees are better designed to handle other storms too. After some hurricanes, islands are swept clean but the palm trees are still standing.

The Giant redwoods been standing in the Sierras and west coast of Northern Calif. for millennia.

If anything they are dying because of pollution and getting cut down.

Thats brought to you by the NWO.

The thing that amazed me most about some of the devastated areas is the trees are still standing, even with leaves on their branches. The houses though are just gone. Little left but rubble and ash. Materials used in construction are super flammable.


I used to live in an area were they did control burns almost every year. The underbrush was highly flammable, close to the ground, and would burn up very rapidly, so while the trees may have suffered some scorching around the bottom, the trees were pretty much unscathed after the fire.

What frightens me is how homes in some areas seemed to have been made of such flammable materials, that they would be able to be turned to ash, at such speed, as to leave trees standing right next to them unscathed.

I think the cars and other large appliances are culprits as well, because in some of those areas they also burned to ash leaving the trees with green leaves and no evidence of damage.

I admit that some of the fires did not fit what we are used to seeing in forest fires. Some were not even near the forest, and some were surround by housing developments that went untouched. I know many are pointing their fingers towards possible attacks from scalar or microwave weapons, but if they are not involved, than it is much scarier to have to accept that we all may be living in tinder boxes that can go up without warning, and be reduced to cinders in seconds..

One of the things I came to realize about the devastated homes is they were left to burn en masse over the course of that first night and well into the next day.

Mostly people were fleeing the flame front, a response hadn't been mounted yet against so many wide spread, large fires occurring all at once.

Part of the reason for that was the way they started, by the winds that blew down power lines and force fed the fires caused by electrical arcing. This happened in several regions right where the fires started.

And compounded like you said by built up undergrowth.

In parts of California environmental rules make it illegal to clear away the dried out underbrush around your home to create a fire break. It's not natural. Of course, in an ecosystem where the plants propagate using fire ... it's also not natural to have such large buildups of dried out undergrowth, either, because mother nature goes through and burns it out regularly.

Fire is a part of the natural order of things out there, so much so that some of the pine cones won't open without being burned.

I cannot imagine devastation at that level.

Sadly, I heard on the news a few days ago that the majority of those who perished were the elderly.

I'm not sure *why,* but I can only imagine either the inability to leave, confusion, stubbornness to leave, the quickness with which the fire moved and consumed, or simply being unaware of the potential danger they were in.

It truly breaks my heart, and I cannot imagine what it must be like to experience a wall of fire surrounding and consuming everything around you from which you cannot escape.