How is it that Trump is still in the White House?

page: 1
56
<<   2  3  4 >>
log in
join
share:
Dfairlite
+46 more
posted on Oct, 9 2017 @ 08:30 AM
link
I was assured by everyone on the left and some on the right that he wouldn't make it a month. Then to spring, then to summer, then the end of summer, and at worst, the end of the year. Well the end of the year is coming and there doesn't seem to be any sign of Trump being forced out of the White House. In fact, if we're being real, mueller could come out with damning evidence tomorrow and he still wouldn't be out by the end of the year. But there's still no damning evidence on trump even after a year of investigating. I'm devastated. Then I ran across this article LINK yesterday that says he's probably going to get re-elected.

What in the actual hell???? Was it all hysteria? Was it just an overreaction to an outsider finally coming into Washington in the highest office of the land? I thought for sure the russians would have gotten him to lift sanctions by now, instead he's increased them. I thought his travel ban was supposed to be struck down, instead it's on a sure path to victory at the SCOTUS. I thought nuclear war with NoKo was supposed to happen by now too. Women were supposed to be back in the kitchen by now, slaves were going to be back in the fields too, I'm sure. But here we sit, with good economic growth, consumer optimism at highs, and wages increasing. I was told the wall wouldn't be build, yet the prototypes are currently being built in california. They're literally building walls!?!?!?

If you couldn't tell by now, I'm not actually surprised Trump is still in the White House.

Humans hate change. And we're in for a lot of it. Everybody is uncomfortable, but soon they'll get over it and realize it doesn't matter who is the president, they are still getting the shaft.

Its because people stopped listening to the fake news. People are waking up to the corrupt government and like it or not trump may be evil but he is a new type of evil.


If you couldn't tell by now, I'm not actually surprised Trump is still in the White House. 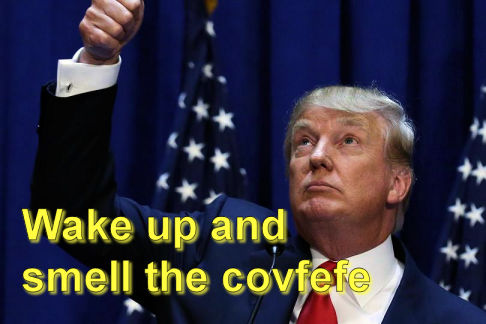 A dumbed down society needs a president who not only walks the walk but tweets the talk.


If Trump isn’t removed from office and doesn’t lead the country into some form of global catastrophe, he could secure a second term

It takes Congress to start impeachment.
Repubs are not going to impeach Trump. We're stuck with him for years, assuming we survive.

Well that's a simple question to answer. Imagine you're a prosecutor and you're trying to flip people (whether they have anything to flip for or not) but the guy you're trying to get them to flip on can remove any jail time, why would they flip? He needs a way to nullify that power (which he tried months ago, when he went opened up state cases against manafort, as a president cannot pardon state crimes).

I'm glad to see some realism sinking in.

Middleoftheroad
+46 more
posted on Oct, 9 2017 @ 08:45 AM
link
Because the left are realizing you need more than fake news to impeach a president. Its really as simple as that.

That would be accurate, but in this case, your kid hasn't bitten anyone yet. You're just worried they might.
edit on 9-10-2017 by Dfairlite because: (no reason given)

Well after your losing tirade, I think it's safe to say that you would be better off buying Beer than Lottery tickets.... no ?


Yeah the prototype of a wall. Its a freaking wall, lets see how much money this "prototype" of a wall is costing the UNITED STATES not MEXICO. Oh only up to $500,000 for EACH prototype. FOR A WALL PROTOTYPE....It should be able to be done on PC for next to NOTHING. Its a freaking wall!!!!

To answer your title:

Because he is a good president.

The free speech area designated for potential protesters is a "dusty, unshaded, weed-choked lot overlooking Otay Mesa and more than 1.5 miles away from construction," according to The San Diego Union-Tribune.

And that has what to do with him looking into what to do if trump tried to pardon himself or anyone else for that matter from the Russia investigation? Of coarse they are going to sue. Perhaps if trump would not have fired Comey Because of what? Oh yeah RUSSIA, this thing might be closer to being over. That is why he fired Comey. Those are his words.

“Some men are born mediocre, some men achieve mediocrity, and some men have mediocrity thrust upon them. With Major Major it had been all three. Even among men lacking all distinction he inevitably stood out as a man lacking more distinction than all the rest, and people who met him were always impressed by how unimpressive he was.”
― Joseph Heller, Catch-22

Also, that's literally about one penny per tax payer in the US.