posted on Oct, 5 2017 @ 10:56 AM
link
.... if you don't want static in your life. This thread isn't about the 1st Amendment as it's a worldwide problem. Yes you have free speech but are not free of consequence. There, it's said we don't have to revisit it.

People today have no problem voicing their displeasure. We see it daily. Someone says something or does something and BOOM, letters, emails, texts, etc. fly and the focus of the ire is brought up before the boss. This indecent, as an example, happened in Quebec:

TVA says commentator Luc Lavoie will not return to the network until the Surete du Quebec looks into complaints about his desire to “hunt separatists.”

The Parti Quebecois has denounced the comment, which also caused an uproar on social media, with some calling for a boycott of TVA and Videotron, a sister company that provides cable and Internet service.

On Tuesday, Lavoie, a onetime adviser and spokesperson for former prime minister Brian Mulroney, made the comment while discussing petitions tabled in the National Assembly about squirrel hunting. After referring to “hunting separatists,” he let out a hearty laugh.

The SQ received several complaints about the remarks and is “currently analyzing the situation to determine whether a criminal infraction occurred,” Stephane Tremblay, a spokesperson for the provincial force, told the Montreal Gazette.

It was a frickin joke. One can easily infer that. That didn't stop some Quebeckers from being outraged. Mind you it doesn't take much to offend some Quebeckers. THAT will probably offend some but I'll take that one on the chin because it's true.

You don't have to be in the public eye to have outrage aimed your way. Just anything that can be construed as offensive. I've identified the people this encompasses.

1- People that don't like you and finally have a little something to complain about, whether it's an issue or not.
2- Those without a sense of humor. It was a joke people. Don't get bent.
3- Miserable people that are just chomping at the bit to vent their venom on anyone. Whether they believe in what they are saying or not.
4- Those justifiably pissed off. In that case though, YOU are the problem.

If you're in the public eye think about that. Yes joking is a part of life, a good one imo BUT be aware you may be a target for one of those people listed above. If you aren't in the public eye and you get complaints about whatever, say a store owner with a picture of X that bothers someone, use your discretion. Is it worth sticking to your guns? "Screw em if they can't take a joke." I tend to lean that way myself.

Digital media has made it possible for these people to EASILY voice their displeasure. No stamped envelope needed. No waiting on hold for the Complaints department. Instantaneous and public. Easy for other miserable people to jump on the bandwagon...from anywhere in the world. That bugs me. Companies make decisions on these numbers whether the input is coming from persons affected by the issue or not. They should man up and ignore trifling pettiness.

But that is the world we live in today. The VAST majority of people aren't that easily offended or they get the joke. However we ALL are subjected to this scrutiny because of the vocal minority. In this example the separatist movement is all but dead as the older generation passes away. Quebeckers are fine as a part of Canada. But the few that aren't are making noise. I like Shatner's(a Quebecker) comment and I think it works here:

ETA: This is also NOT about the NFL protest. That's been done to death.
edit on 5-10-2017 by intrepid because: (no reason given)

The intent is to shut up people who disagree by accusing them of hi crimes. lol. By keyboard, even.

I know the difference. They aren't reffering to hunting 'squirrels' anyway.

Hunting Hannessies is a crime.


Yes you have free speech but are not free of consequence. There, it's said we don't have to revisit it.

This superstition needs to be revisited, and challenged time and time again. The outrage, anger and contempt is not the consequence of who said it and what was said, but the consequence of who heard it and how they reacted to it. We should be repeating this and yelling it from the mountain top so that we do not have to walk on egg shells, self-censor, and hence impede free thought for the sake of those who cannot deal with their own thoughts and emotions when they come across something they do not like.

While the medium for complaint is largely the net, I'm referring to what one does and says in RL.


While the medium for complaint is largely the net, I'm referring to what one does and says in RL.

The rest I can agree with. Simple manners and respect for the feelings of others will get you far.

posted on Oct, 5 2017 @ 06:55 PM
link
The problem is that nearly everything you say could potentially offend someone in some way, and these days, everyone seems pretty sure that if they felt offended, you meant to make them feel bad no matter what you said.

We are headed toward a largely humorless, largely silent and very suspicious society of emotionally repressed people. 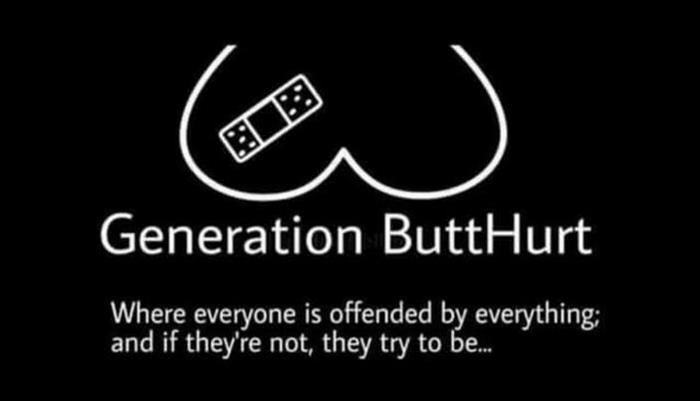