Spain's king has said the leaders of Catalonia have broken the law and shown an inadmissible lack of loyalty.

Addressing the nation after days of unrest, King Felipe said the region's leaders had behaved irresponsibly and are risking the whole country's economic stability.

He went on to back Spain's government, saying the Catalan referendum for independence was illegal and undemocratic, and adding that the state needs to ensure constitutional order and the rule of law.

"Today Catalan society is fractured and in conflict," he said, referring to the crisis as a "very serious moment for our democratic life".

"These authorities have despised the affections and solidarity feelings that have united and will unite all Spaniards."

Things were getting ugly here the last few days. It's good to see things back on track. But emotions still run high. 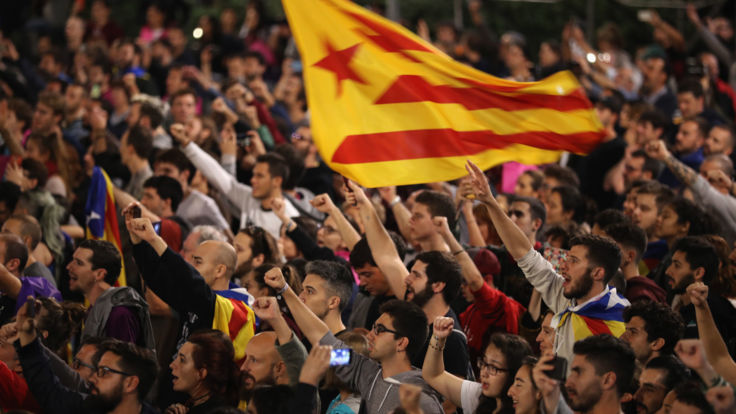 It's not everyday thugs in power are held accountable for their actions against their countrymen. This was a good day. Power in numbers.

posted on Oct, 4 2017 @ 02:43 AM
link
In other words another Spanish civil war.Nothining worse than civil war.

What about the THUGS who gave these people false hope? I mean THE RUSSIANS and the Catalan organisers acting illegally and subversively.

Russia caused all this. They have funded the vote in part I believe, an illegal vote, and even helped print the ballot papers. Look into this if you don't believe me.

It was part of their plan to destabilise the EU in any way they could. They will try and do it lots more, too.

The Russians and the Catalan Separatists are the criminals here. Spain had no choice. The Catalan people should have gone through legal channels. This can't be allowed to succeed. It would do them no good. They would be much poorer and also have to placate their Russian overlords who would be asserting themselves as "friends" of an independent Catalan and gain entry into Spanish affairs. Catalan would OWE the Russians like Cuba does if that happened.

The King is right.

RT have had a constant campaign over Catalan Independence. Why are they sooo interested in Catalan becoming independent, just like they were about the UK leaving the EU?

If they let this happen then it would be the Basques next. There would be no Spain left once everyone took their bite out of it.

It is not going to happen. It can't be allowed to happen because it is illegal. The underhand, terrorist like way the Catalan Independents did this resembled Hitler's rise to power, how he did things. No no no.

I feel sorry for them because SOMEONE gave them false hopes and it has led to some political violence. Britain survived much worse in the 80s. It's nothing new. Spain will recover. On this occasion the King is right and so is the EU.

posted on Oct, 4 2017 @ 03:17 AM
link
and not a single word about the violence against peaceful protesters. He just turned many more Catalans into independists

Oh yeah. I forgot. The Ruskies are to blame for everything including rigging the American vote for Trump.
edit on 4-10-2017 by ADSE255 because: (no reason given)

I always recognize paid trolls by their technique in EMPHASIZING random words.

Anyway, to me the situation is extremely funny. Democracy is about the will of the majority, but only if it matches with the laws of the minority

The situation in EU is similar to Soviet Union during it's final phases. The same thing, smaller parts want Independence, and the politicians are telling us all kinds of fantastic explanations about why it is righteous to keep them from getting independence.
I'm living in one of those small countries that were part of the Soviet Union and now is part of EU. And the reasons that these unions are failing are also the same. There are just too many highly paid officials running this machine, who are too incompetent and lack any sense or need for responsibility. These people are panicking the most on the idea that EU might break up. They are panicking because getting a real job is their biggest fear in life. In the private sector, no one in their right mind would pay these salaries for this level of productivity. So they are guarding their comfortable way of life. Just as same as in Soviet Union..

originally posted by: ADSE255
a reply to: TDawg61

Its coming, why do you think all these new laws are being passed all over the western world, incidents like we just saw at the music festival are the tools used to get public support for the law pushers.....each and every time something like this happens we get closer to hell on earth.

What I mean is the more people push back the tighter the reigns will be.
edit on 4-10-2017 by hopenotfeariswhatweneed because: (no reason given)

Yes I know. I think we all know. There are those who would lie and blame others, but we know. The backlash is coming too, and they know it.

This along with everything else to destabalise our lives all the while handing out bread and spectacles to appease the peasants. Like the internet being attacked via paperstorm. One day, having a choice may not exist for any of us. This is the ultimate wet dream of the 1%, despised by the 99%.
edit on 4-10-2017 by ADSE255 because: (no reason given)

Just saw an interview with a catalan guy. He wanted to vote No, but on his way to the polling station he became witness of the police violence against the voters.
Then he decided to vote Yes.

Are you defending the Spanish Crown or calling it out?

The 'constitution' adopted was during reign of Franco, a fascist. It may have been signed to at the time, under coercion.

Thats the argument on the part of Catalans. Of corse the official narrative wants to dismiss it. After all, repression of voting rights is totalitarian, authoritarian and-- whoops, they're NATO and EU and Westernized.

Never mind. Off with their heads.

Every other referendum for independence in the EU has been swept under the official rug, too.


Seriously, Russia's plan is to destabilize the EU, it's essential for them if they want their 'Russkiy mir' back, their 'Russian world'. There's no need to deny this.

But that doesn't mean Catalans have less claim to independence than any other people. Since I support independence for the Ukrainian people, then I can hardly dismiss the Catalans.

The Spanish government has #ed this up royally, they should have stalled instead of going on full offensive. Now they had cops beating old ladies bloody, they are no better than Russia if they keep this up. It's an awkward situation all around.

Every competing superpower wants to destabilize its rivals. Bringing Russia into this situation is just a method of misdirection. The Spain/Catalonia situation is old and has deep historical and economical roots and Russia lacks important cultural or economic influence over the people of Catalonia and their judgment.
Trying to bring Russia into this subject is just low quality and lazy psyops. The people in power should stop giving the psyop command positions to their (possibly inbreed) cousins. Try to create more complex and interesting narratives for success.

posted on Oct, 4 2017 @ 07:55 AM
link
Until their is an official apology by the ruling people anything they say after that display of violence is nothing but hot air meant to justify brutality.

Oh I am so sure they were peaceful...more like they were assembled illegally and breaking the law already. The police were in their rights to break up the gathering. people tried to resist and got clobberred. Peaceful protestors would had left if asked to.

This is another crimea situation.

originally posted by: pavil
a reply to: ADSE255

It shouldn't have to sink in.

American citizens have seen several times the will of the people in various places get over-ridden through various means because TPTB or various special interest groups have called those referendums undemocratic.

Picture people in statehouses screaming "This is what democracy looks like!" and you have an idea.

originally posted by: ketsuko
The EU was an idea doomed to fail from the start.

Thank God they are showing their true colors to everyone. Screw Independence from the EU collective. The UK got out, I doubt they let anyone else leave their "free association of equals". LOL

No one else really matters, let's be honest about the EU. Everyone else is "less equal" to them.