Bald Eagle Having Dinner...I Was able to Grab Some Pics 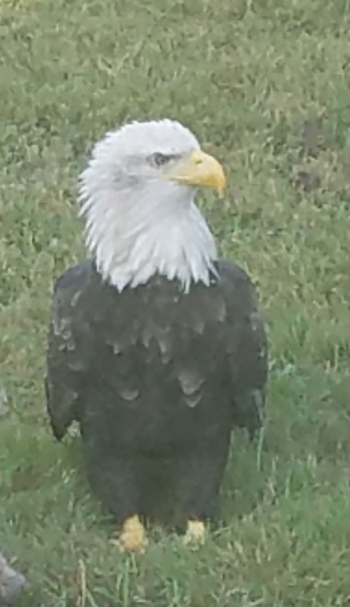 I was just taking a trip to the store and saw my first ever, close up, in person, Bald Eagle. I pulled over and snapped a few shots... managed to get a some decent ones so I thought I'd share them.

The Bald Eagle was on the endangered species list 40 years ago. They are one of Americas success stories though, coming back strong and numbering in the 70,000 range now (Alaska and Canada included).

Chosen as the national bird on June 20th, 1782 because of its long life, great strength and majestic looks, plus, at the time, it was thought to only exist on this continent.

• The Bald Eagle is truly an all-American bird; it is the only eagle unique to North America.
• Nests are sometimes used year after year and can weigh as much as 4,000 pounds
• Bald Eagles may live 30 years in the wild (even longer in captivity)
• Bald Eagles pair for life, but if one dies, the survivor will accept a new mate.
• In hot climates, like Louisiana and Florida, Bald Eagles nest during winter
• Bald eagles get their distinctive white head and tail only after they reach maturity at 4 to 5 years of age ...

The Pictures (sorry, he was eating) 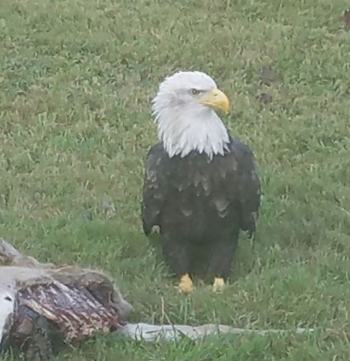 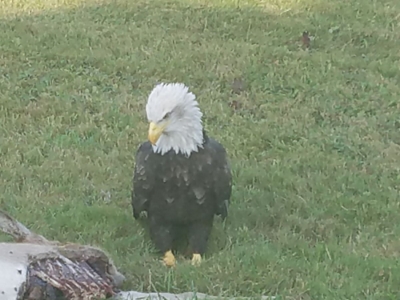 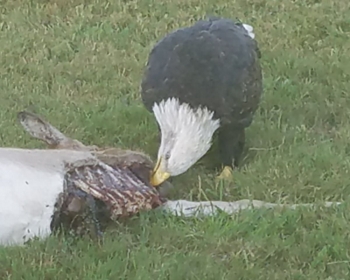 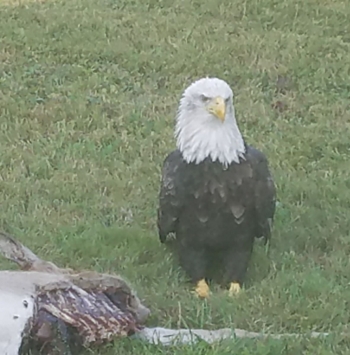 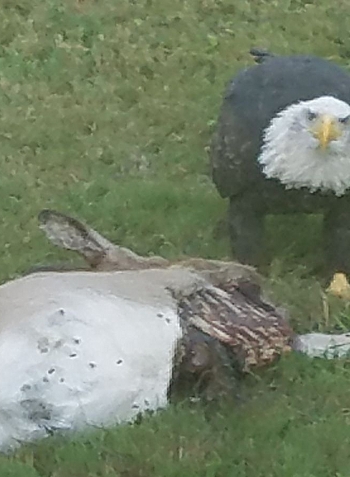 Where I live it is rare to see them. I've seen them in the air, so far away that you are not sure if it is a bald eagle, but never this close before. So it was a treat and pretty awesome to be able to take such close shots. Not professional quality, I know, but still, pretty neat. I managed to get some video of him eating too, but it is from a distance.

Damn, how far were you when you took those? Looks like it let you get pretty damn close.

"Don't mess with my dinner."

What a thrill Blend !

It looks like he let you get pretty close.

In Australia we have Wedgetail Eagles ... such grace and majesty !!

We have them not far, or so I've been told, but I've never seen one myself.
Supposedly we have owls too.

I have seen Coopers and Redtail hawks.....but that is the extent of birds of prey for me.

It was between a Turkey and an Eagle for the National Symbol.

I think they made the right choice.


Thanks Timely. It really was cool to watch him eat. I've never seen that before...well, only in videos. Surprised he didn't fly off with all the people around tbh..but, I was glad to be able to capture the pics..

What a marvelous creature! Thanks for sharing these pics, blend-- you captured quite a moment!

PS: I love your new avatar

posted on Oct, 3 2017 @ 07:57 PM
link
Where I'm at, we get eagles who winter over along the Missouri River. So you can see them flying as you drive into downtown.

One winter there was a shallow retaining pond along the highway where I drive in to work and for some reason, the local eagles decided it was the prime hangout. For about two weeks, every day as I drove past, there would be as many as 10 or 15 of various ages from dark headed juvies up to white headed adults just sort of hanging out in this shallow pond.

Then we had a winter storm and the pond froze over, so they all went elsewhere.

It was a pretty good show, but not nearly as close up as what you got there. Nice shots!
edit on 3-10-2017 by ketsuko because: (no reason given)


Supposedly we have owls too.

posted on Oct, 3 2017 @ 08:50 PM
link
Nice pics of the eagle, thanks for sharing. We have nests nearby here, literally within site and sound, pretty cool really. The downside, of course is, gotta be careful walking or having small critters outside though.

posted on Oct, 4 2017 @ 08:17 AM
link
They look so big in person! I have only seen one, and pretty oddly it was on a tree in a pond just 3 miles outside of downtown Boston,maybe less. I looked across the pond and was astonished at how big it was when it flew, I thought it was a pterodactyl.

originally posted by: Indigent
a reply to: DontTreadOnMe


Supposedly we have owls too.

And then you will wish they weren't any


Yeah. Owls have a great power of making the hair stand up on the back of your neck and possibly s**t yourself. Happened to me twice (not the s**tting) but the neck hair stuff.