...the Mayor of London, is reportedly seeking powers to ban burning wood in some parts of the capital . . . wood-burning stoves could come under tighter controls, with only low emission models permitted to be sold in future.


The rocket mass heater works on similar properties as a masonry heater. A fast, high heat and oxygen-fed fire burn up the volatile gases and particulates, leaving very little pollution, and turning almost all the fuel into energy. A bit of smoke is released during the first minutes of a fire, until the temperature in the chamber is hot enough to burn the combustion gases as well as the wood.

These rocket mass heaters are the best thing since sliced bread.

If you haven't heard about them that's because almost anyone can build one themselves and never pay another heating bill.

We know from Grenfell Tower building codes in London are optional. You don't need anyone's permission to heat your home cleanly, efficiently and affordably. Go ahead and build yourself a rocket mass heater.
edit on 3 10 2017 by Kester because: (no reason given)


A rocket mass heater is a clean-burning, high-performance burner usually put together using a majority of recycled and/or natural materials, such as cob. Owners claim an 80-90% reduction in wood usage compared to heating the same space with a metal wood stove.


The wood you burn is sticks rather than logs. Be warm this winter.
edit on 3 10 2017 by Kester because: (no reason given) 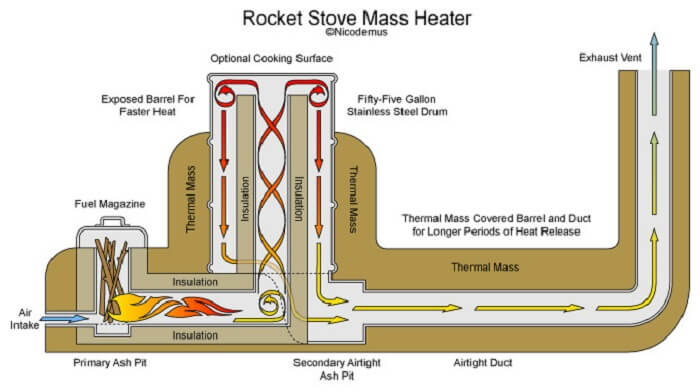 posted on Oct, 3 2017 @ 02:16 PM
link
Looks like a pretty nifty stove. We have a fifties kitchen wood stove. It is cast iron inside and it needs to have a block of wood put in about every forty five minutes after it is running. I can do that is less than thirty seconds almost every time.

The size I use is about the size of a pie shaped piece about three and a half inches on all three sides. A rounder about four and a half inches round at night will last about three hours. They are between twelve and fourteen and a half inches long. Three singles, about a hundred eighty bucks worth if we buy them, takes the place of three hundred gallons of oil ($700.00) and it keeps the house warmer. On top of that, we bake things in the oven and sometimes cook on the top. I don't care to fry on it, the grease spatters all over it and needs to be cleaned, but do make soups on top and also popcorn in a pot. We heat water in a kettle too, and can make coffee if the power is out.

It's been running for three years and there is nothing in the chimney, the little bit of dust seems to fall off during the summer. I throw a few potato peels in the fire once in a while, but I do not know for sure if that does anything. There is less smoke coming out of the chimney when we have the woodstove on then when the oil furnace is running. It does make smoke outside when I start it in the morning. They sell wood pellets here for pellet stoves, talk about making things complicated and expensive. I sure wouldn't want one of those.

It doesn't pay to run the woodstove unless it gets cold, Very seldom do we use it in october or the beginning of November. It heats our two thousand square foot house, if I burned only wood it would take six singles of wood. Which hurts the environment more, burning two full chords of wood, tops from logging and from people clearing land to build their home, or six hundred gallons of oil

posted on Oct, 3 2017 @ 02:21 PM
link
I wonder if that stove would burn the clippings from the hardwood flooring company, a full 8' pickup box full costs fifteen bucks, they use a loader to put it into your truck. It has a heap. Sometimes when they have too much, they say you can haul all you can haul a day for fifteen bucks. It is kiln dried maple, it will eat through cast iron grates if you use it by itself.

These rocket mass heaters are the best thing since sliced bread.

Wrong. But with all due respect,

These rocket mass heaters are the best thing since bread.

This is the first I've seen of it. It's like a traditional Tibetan stove, but with serious engineering cred and amazing use of cheap materials. I love it! Thank you. I'm going to make one as soon as I can...if that day ever comes, I hope so!

posted on Oct, 3 2017 @ 10:04 PM
link
Companies have those that also generate power . Most have USB ports for charging devices as well

Where's the double air lock in the chimney? Sure that stove gives and stores a lot of heat and is easier to build than a proper masonry stove, but you waste most of the fuel used if there is no airlock to prevent the hot air escaping from the chimney once the fire has burnt down. Of course, if you do not know how to use the air lock, you risk carbon monoxide poisoning...

It doesn't quite work that way, you surround as much of the "chimney" with mass as possible. Sometimes there can be up to 20 or more feet of stove pipe inside the meandering chambers of the bench or what have you. You store that energy in the mass before it gets a chance to leave. The pic in the OP only shows the workings of the stove itself, with only a short exhaust. In reality, these exhaust tubes after the taurus combustion chamber are much much longer. Google some images of rocket mass bench heaters.
edit on 4-10-2017 by Bobaganoosh because: (no reason given)
edit on 4-10-2017 by Bobaganoosh because: (no reason given)

Even better : make electricity with your rocket stove with the addition of a Stirling engine.

I'm not sure Madam will appreciate the 'styling' of the whole thing in the middle of the living room but that's another story.

So does a regular masonry stove, but it has the airlocks at least around here. My masonry stove stays at least 24h lukewarm when heated properly. If I leave the chimney open after heating, the heat dissipates in about 12hrs.

Look at the image in the link here, the two bars at the top are the airlocks. The internal structure is such that the smoke goes up in the middle of the stove, comes down the front sides to the bottom and the goes up another set of channels on the rear side and out of the chimney past the two sliding airlocks. Sometimes, depending on structure, there's a bypass 'valve' to easier light the stove. This bypass opens the central burn channel to the chimney bypassing the side channels and is meant to be closed once you get the fire burning.

This is a sort of reverse barrel to what is proposed in the OP, as the masonry is inside the barrel and used to construct the ducts and retain the heat. I have one like this one in my house. The tallest ones are up to 8ft high and have up to 20ft of channels and can retain heat up to 48hrs. Wood burning efficiency about 80%.

Just be prepared to pay 5-10K$ for a kilowatt of power since the engines are really expensive.

Apparently the guy in the vid build one himself. Otherwise, there is someone in the US who started a crowdfunding a few years ago and that is now producing engines at a decent price (+/- 1800$) :

The overall efficiency will never match an internal combustion engine but it can work everywhere where you can find stuff to burn.