posted on Oct, 3 2017 @ 07:03 AM
link
Below is an excerpt from a book I have come across on the web recently. I don't know the source but I know it was written around ~87, from the info on the page it seems like mid-late 80s regardless.

Quite interesting how Have Blue was almost perfectly predicted aside from the thrust rating. Certainly lends some credence to the project listed below it... 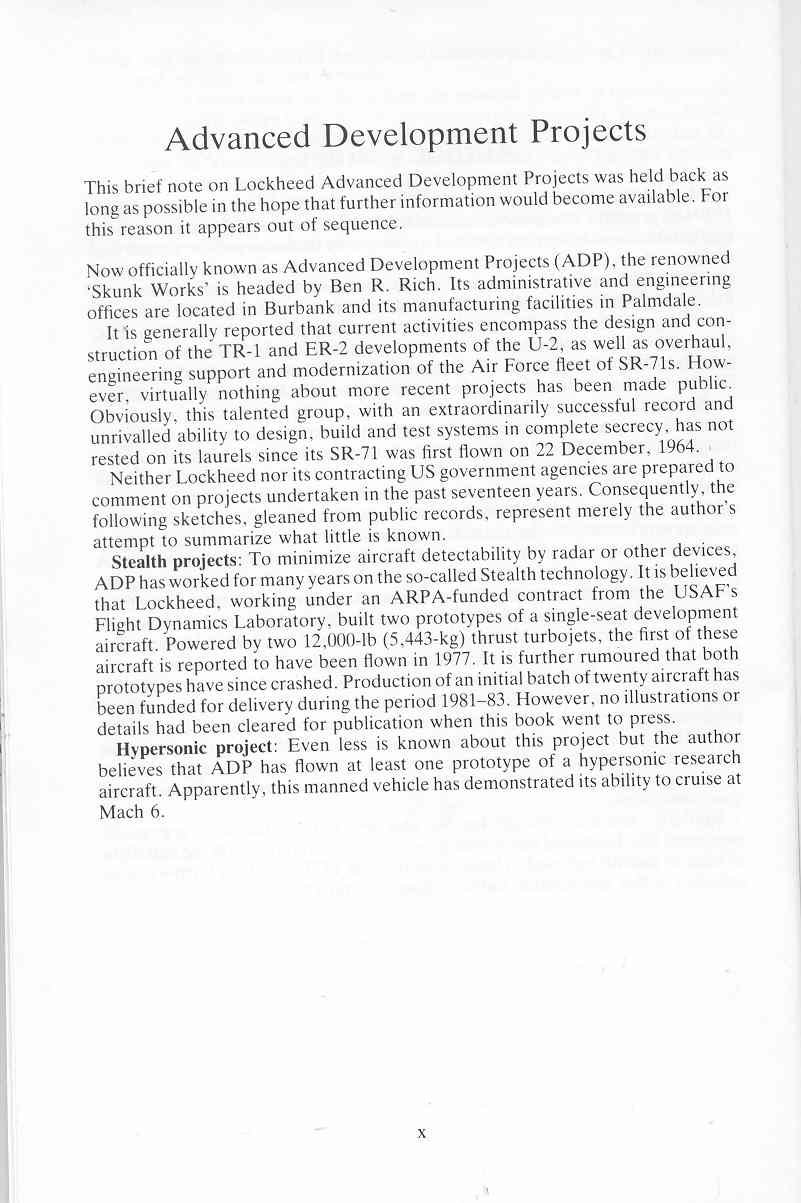 Should this not have some source as according to ATS requirements?

He believed they had a manned prototype that had made at least one flight at mach 6.
edit on 10/3/2017 by Zaphod58 because: (no reason given)

My money is that the X-24C flew some time in the 70s or early 80s. That, or one of the X-15 follow-on designs that was talked about in the 60s. Either one would likely have performance in the Mach 6-10 range while being very "do-able" using 60's technology.

My hunch is that the Space Shuttle's TPS materials came off of that aircraft, or data gleaned from it, as they suddenly appeared out of nowhere 100% mature, and furnished by Lockheed, no less.

The success of that program would have likely led directly to COPPER CANYON, which likely failed due to the difficulties of scaling a successful demonstrator up into an operational-sized aircraft that could manage those speeds for a strategically useful duration of time. Basically, the same problems we have had today going from the X-47 and the X-51 to something operational, minus 40 or so years worth of materials science.

At least, if that aircraft actually existed, then that's how I see it all going down.
edit on 3-10-2017 by Barnalby because: (no reason given)

They could have had an unmanned system to test them too. It wouldn't be that hard by then with some of the unmanned stuff that had already been done.

i don't know why people cant understand this speed thing, there are obviously sub orbital platforms that could stay up there way above mach 6, and the HTV showed that we can do high mach numbers.

so if there are sub orbital platforms why couldn't they dip into the atmosphere from time to time a hypersonic speeds then pop back up into space.

why the need to stay in the air? other than commercial applications and SOME weapons, remember the MX had a very small CEP and used hypersonic MIRVS and the Russians and chinese have boost glide weapons that are effective. And the cost might be smaller for a regular air breather compared to a STO or TSTO

Oh, I know. Few things are cooler to me than 1960s-70s UAV tech, and that's completely ignoring ICBM and MIRV/MARV research that could have just as easily led to those technologies.

Let's just hope, if it was an air-launched unmanned hypersonic testbed, that they improved the launching system over the D-21's.

i saw a smaller triangle hovering in the street within throwing distance, i'm like 99.99 sure it was ours. typical triangle behavior like silent and not following normal aerodynamics.

saw it with a buddy.

i guess it could be 30 year old tech seeing as belgium happened in the early 80's but it was impressive to say the least.

what is you take on those types of sightings. could it have been accident i saw it? or did they really not care?

that tech is way more impressive than anything hypersonic using jet fuel or MIRV/space shuttle/HTV stuff.

i saw a smaller triangle hovering in the street within throwing distance, i'm like 99.99 sure it was ours. typical triangle behavior like silent and not following normal aerodynamics.

saw it with a buddy.

i guess it could be 30 year old tech seeing as belgium happened in the early 80's but it was impressive to say the least.

what is you take on those types of sightings. could it have been accident i saw it? or did they really not care?

that tech is way more impressive than anything hypersonic using jet fuel or MIRV/space shuttle/HTV stuff.


They let you see it so you would dream and think about it. so they can suck up those delcious dreams.

I thought we were processing jump coordinates while dreaming.

Those got picked up by the chevrons.

I like to call that guy, "He who shall not be named."

Just recalling what the old man used to say. Basically, if it's really, really black, you ain't gonna see it.

SIlence Blalsphemer! thou shalt not take the great A's name in vain whilst i am around.(lol I bet he would LOL at that one)

Seriously though stranger things have happenned havent they? But most likely they just wante dto see if you would flip out and run away screaming.

I and about 20 others saw a triangle move directly over Laramie in 1998. They "care" about a type of secrecy, but they have found that if something labeled, as most triangle sightings are, as a UFO, they public interest does not go too deep. Plus, by showing the vehicles to the public in this way they can eventually claim that we were shown such craft. Double psyops deal there: You didn't see any of our stuff, but if you did, it was a UFO and thus doesn't exist.

No one here wants to seriously talk about triangle sightings but anything with wings and a jet roar gets attention. That tactic too is part of the strategy of denial.

So, who are they hiding those machines from, us, the Chinese, the Russians? No, it seems they are hiding them from the US taxpayer that paid to develop them. Check out my "Black Triangles: The Worst Kept Secret" in the files here. And while you are at it, do a little forward thinking about how those craft would appear to also operate in space and what that implies.

Oh yes. they operate in space as easily as air. Its a huge joke to them that most of u sdo not even realize we are not earthbound anymore really.

no i pulled my car over and pushed my friend out to come look, we stood in the middle of the street staring at it before it zipped away at roof top level and into a river gully silently. really freaked my buddy out.

the one thing is i had my phone on me but i was so flabbergasted that i didn't even think about it, i just stood there wide eyed

its a hard to pin down platform and has a lot of sceptics out there that swear they couldn't possibly exist, so i guess there tactics are working.

as far as i know only my friend and i saw it and i'm a nobody and certainly can't claim to have paid for it other then the small amounts of taxes i've paid, i can't imagine what they cost if anything really.i guess they need support so they must pay someone something for services rendered..?..

as far as how they work silently and against common knowledge aerodynamics? i haven't the slightest. What ever it truly is would change the world if it was released and im not sure it would be in a good way. it must take massive amounts of energy...someone would find a way to weaponize that energy so maybe its best its in the dark for now.


i would bet russia or china has figured it out. i think behind the scenes there is a truly international group that flies them in space atleast. US,UK,Japan,AUS maybe even the russians.