But the video clips of Kim that I linked didn't have him w/walking sticks or a limp. And I'm not saying he's athletic. I'm saying he's more athletic than Trump. Even a tortoise is fast when compared to a sloth.

And how is Trump like a pit bull? I had a pit for a year and his energy & power were literally off the chain (get it get it? he kept breaking my leashes and chains). Judging by Trump's body type and gait, he would get winded within the first 40 secs. (Though just like the Kimbo vs Dada fight, they'd both get winded quickly and it would turn into a pathetic display of flopping around and stumbling).

However, I agree that their followers would storm the ring and cause mayhem. This is most likely a staged video, but Kim's followers seem to be far more rabid.

originally posted by: gortex
a reply to: TruthxIsxInxThexMist

Kim Jung Un by way of knock out in the second round , Trump hangs up his gloves and retires in disgrace.
Kim would run rings around him just as he's doing now.

posted on Sep, 29 2017 @ 01:27 PM
link
Trump KO's Kim in the first round by throwing his IPhone at him as Kim keeps interrupting Trumps attempts to tweet.

I knew a pitbull once who was fat and had a breathing problem. He sometimes "fell" into his bowl while eating with rear legs up in the air... different frame of reference. Point is they're famous for not letting go, not? Once a pitbull bites something you can swing him through the air.

Reminds me a lot of Trump.

originally posted by: IgnoranceIsntBlisss
Well first theyd have to do a press conference troll smack talk tour, not unlike Floyd & McGregor just did, that would go on for months. Their competition over which one is ultimately the "heel" in the equation would be so legendary that scholars for the next 10,000 years would still be debating it.

Then there'd be the match, WWF style. Dennis Rodman as the referee. On the troll tour campaign trail there'd be big talk between them over things like cage matches, royal rumbles and the like. In the end Democrat's and Japanese would sucker them both into a barbedwire match Stranglemania style.


Afterwards they could explore tagteam matchups like Hulk Hogan and the Machoman.

I take it the asian guy was Kim Jung Un gett ing smashed.

So we got Kim lifting weights and Trump dodging eagles. Strength v speed?

originally posted by: Peeple
a reply to: enlightenedservant

Kim athletic? The walking stick isn't just accessoires ...
Trump (I imagine) is like a pitbull.
In the third minute of the first round the referee would try to get in-between because all the nut kicking and get accidentally killed. After that their respective followers storm the ring and: mayhem

The crowd want some action.

originally posted by: gortex
Footage of a Gangnam off between the fighters and the reff at the weigh in has emerged , looks like Putin will be the reff.

As expected Trump spends most of his time playing to the crowd , Putin has the moves.
Reff wins.

Shoulda added a few vids to my op but didn't think of it.

originally posted by: LookingForABetterLife
Here it is WWE Trump VS Kim

Excellent. Thanks for that.

Kim took a beating but I gotta give him his dues, he tried a comeback. Suprised trump was so flexible. 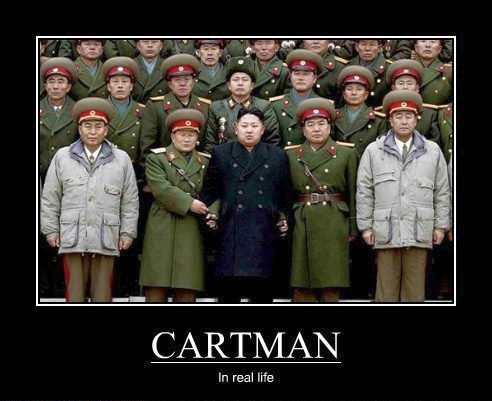 Trump's reflexes weren't that bad for his age. But if I were a betting man, I'd have to bet on youth. Both of my parents are of retirement age and physically it's a night & day difference from even 15 years ago. And both of them are younger than Trump.

Oh, kind of like if Trump has "old man strength" so if he got a hold of Kim, it would be over? But would that work in a boxing match? I was imagining Kim moving around & jabbing until Trump got too tired to fight back. I still think it would be a sloppy "fight" but I'd have to order it on pat per view. lol

Ironically w/my pit, I pretty much had to fight him to get him back to the back yard (only for him to break out a week later). Sometimes he'd lightly clamp down on my forearm for like half a second, seemingly to remind that he could've gotten me if he wanted to. I know they're not like that when serious, but I guess that's my frame of reference.

I think I would've died laughing if my pit was like the one you described. Instead, he had waaaaay too much energy, was pouty like a child, loved to eat my food, was fiercely territorial against anyone other than my family and some friends, and always wanted me to take him places (even in the middle of the night when he'd break his collar and then scratch on the front door until I came outside).
edit on 29-9-2017 by enlightenedservant because: (no reason given)

I honestly don't think it would be a "classical boxing match", or a fair fight... A lot of yelling and then when the breath starts to fade they'd cling on to eachother trying to get kicks bellow the belt line through. It's all about genitals with these two... gentlemen.

That's a hilarious visual. I imagined 2 walruses or sea lions fighting, but without the gore.

Trump and Kim are both wearing their favorite tee-shirts.

posted on Sep, 29 2017 @ 05:31 PM
link
There is a hilarious scene in Bridgett Jones diary, where the two guys, Colin Firth and Hugh Grant are fighting in the street over Bridgette, but it's so funny because they are clearly both so scared they are going to get hurt. It's mostly a lot of swinging and dodging. I imagine it would be a lot like that.
edit on 9/29/2017 by angeldoll because: (no reason given)

originally posted by: enlightenedservant
a reply to: Trueman


You do realize professional wrestling is fake right?
Can't even believe you all are arguing about this. It's satirical...