Elspeth was burnt in the most horribly cruel manner in front of a forced crowd on Swift's Hill. Her torture and murder was used to intimidate and control the local population. Her pain can still be felt there. 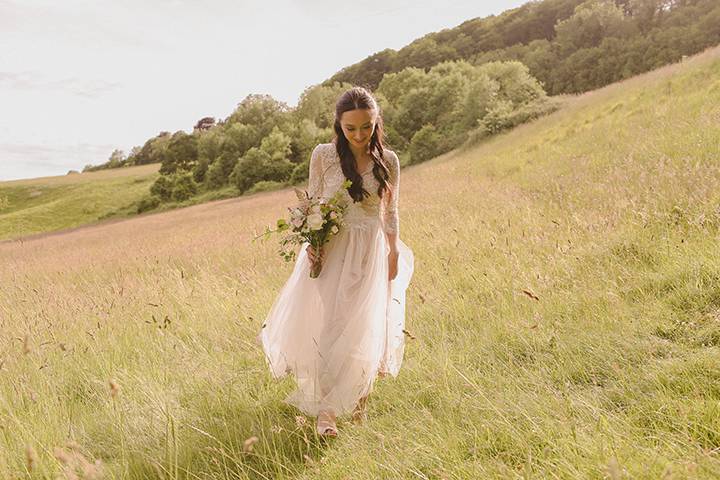 Ecotricity . . . has decided to adapt the application to focus solely on facilities for Forest Green Rovers football club – as part of this the Zaha Hadid Architects designed wooden stadium will move to the north side of the A419 . . .

This fake green tycoon, Dale Vince, www.independent.co.uk... refuses to acknowledge Tony Ind, the man who gave him the opportunity to become what he is today. That is not how a real man behaves. Dale has never been quite right since he got smacked on the head at the Stonehenge Beanfield Ambush.

Due to ATS terms and conditions I can't ask you to use your magic to protect this ancient herb growing land, however much I would like to . . .

Got a location, or photo of the land to target?

Even if the stadium is not going ahead, the trauma should be resolved.

A quick study shows a woman trapped by trauma there. She seems to be stuck in a loop of her favourite time before the trauma inflicted.

Can't sense a covern, so she was probably an innocent healer who liked Nature and helping others.

She's surrounded by Nature Beings who knew her when she was alive, but she didn't know them. So not a seer maybe. Ah, special knowledge passed down to her, something very rare. Dunno what knowledge, and I won't enquire, her specialty.

Her trauma is existing separate from her as a loop in time just suffering. I wouldn't think the two should be united, she doesn't need that. Have to figure it out.

The Nature Beings protect her as best they can from what happened.

Someone else outside her "prison" protects the location, her "people".

If you want to help her, solve the trauma.

The Nature Beings can't do it, they can only keep her from suffering.

If this is the same site as described in one of your previous threads How Can A Witch Burn Site Be Cleansed? it should be resolved since someone unseen let you know there is a problem.

Outside of the woman and her Nature Beings are at least three parties, one of which is hostile and wants her knowledge destroyed. Another coverts her knowledge. The first two are human groups, the third is not. The third is to do with sacred landscapes, sacred to Nature that is and not neccessarily humans. Celtic(?) local Nature gods probably.

So, if one "cleanses", resolves the trauma in the landscape someone must stand between the two human groups and the woman and her Nature Being friends untill she can come under the care and protection of the local gods.

So, a fight is on the cards.