Inca traditions mention a city, deep in the jungle and east of the Andes area of Cusco which could be the last Incan refuge following the Spanish Conquest. [...] Just recently a Spanish Galleon that sunk over 300 years ago, was discovered off the coast of Columbia and possibly holding billions of dollars worth of treasure looted from Peru.

Due to the remote location of the area, as well as dense mountains that have to be traveled, it is no wonder that Paititi remains so hard to find.

Legendary explorer Greg Deyermenjian explains his extraordinary devotion to the area, “The quest for Paititi, for the furthest presence of the Incas into the selva beyond the ranges, [...], the site of Vilcabamba, the redoubt of Manco Inca–[...]–at Espíritu Pampa in the forested plains of La Convención province to the northwest of Machu Picchu. It was then that I began to hear about a site which lay hidden somewhere off to the east, where the Andes and the Amazonian rain forests meet in a riot of hills, ravines, and isolated peaks, all covered in jungle and crisscrossed by unnavigable boulder-strewn rivers and streams.

After having climbed now upriver, up and out of the cloud forest, to emerge back at the high alturas where we had begun, we soon ran into some wandering vaqueros, cowboys, who had driven the cattle to these lonely grasslands for unlimited grazing. From them we learned of an enchanted lake shaped like a figure “8”, astride ancient ruins, in a perpetually rainy and cold area to the northwest.

Then in 1995, from a high perch on the eastern edge of the Andes, [...], I caught a glimpse of the mighty peaks of this strange massif, which seemed to reach to a height quite uncommon for tropical mountains out beyond the Andes: while the entire range was enveloped in what appeared to be a thick mantle of green vegetation, the actual peaks were shrouded in what appeared to be perpetual cloud around the summits. Adjacent areas, [...], are said to harbor the extensive ancient stone ruins that could be the legendary Paititi.”

When you read the story, they also mention a square lake by the twin lakes. In my opinion, I think the twin lakes represent the Figure 8 enchanted lake they learned about from the Cowboys. I've snipped some pictures that I found on Maps. Go to Google Coordinates, www.gps-coordinates.net... and put in these coordinates to follow along with what I've posted below. 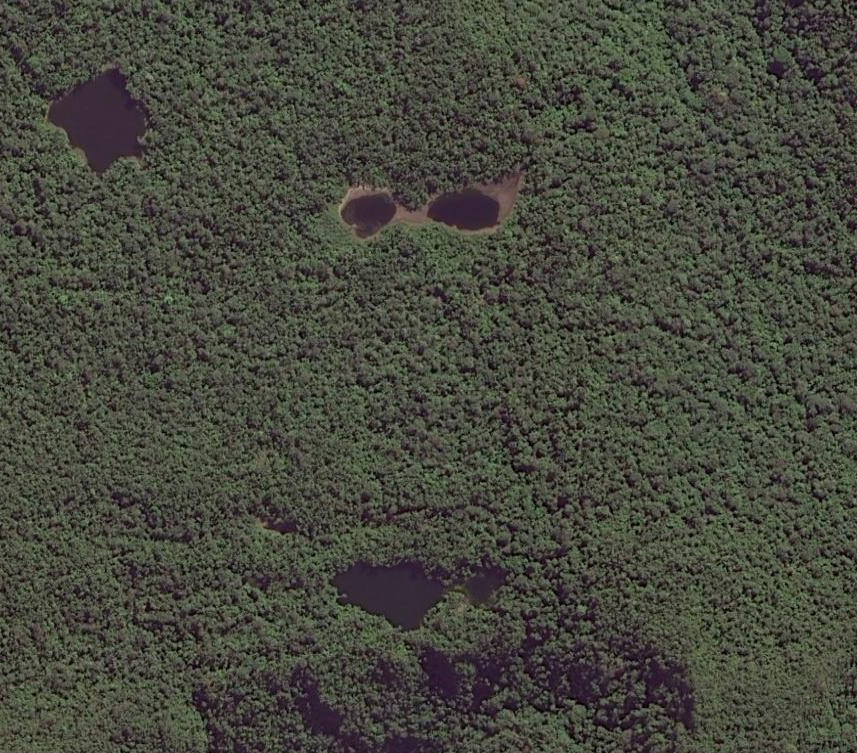 The square mountain with the visible square lake, marking what they believe is the location of the hidden city: 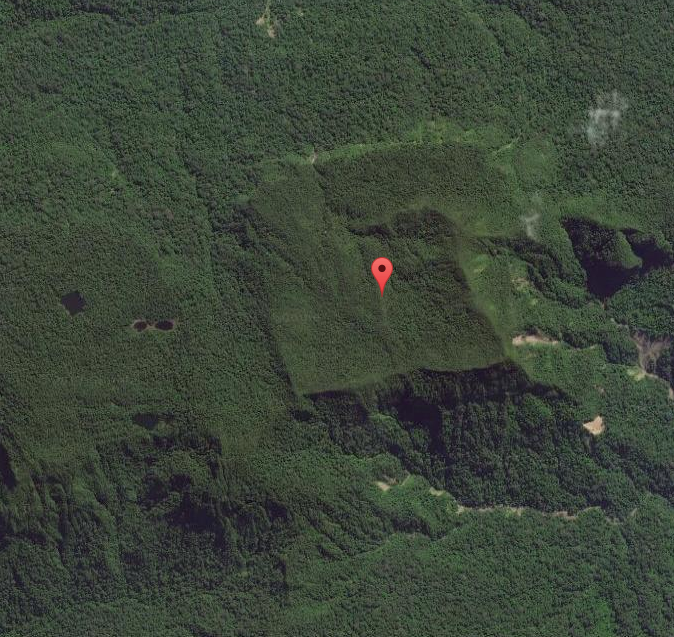 Well for some reason I can't download anymore pictures I snipped.

I know this probably isn't that big of a deal, but I found it very interesting when I started researching and looking for everything, by their words, on Google Maps. Archaeologists think the location is on the square part located on the square shaped mountain. From 3D mode, the mountain looks nothing like a square so if you're trekking through the Amazon looking for a square shaped mountain, you'd never see it.

Could its ruins really be located here? I hope you enjoy getting to do a little research of your own. Let me know if you see something I missed. My eyes get tired after looking at something for so long.

ETA: I was able to add my 3D picture of what you'd see if you walked up on this mountain looking for a square. 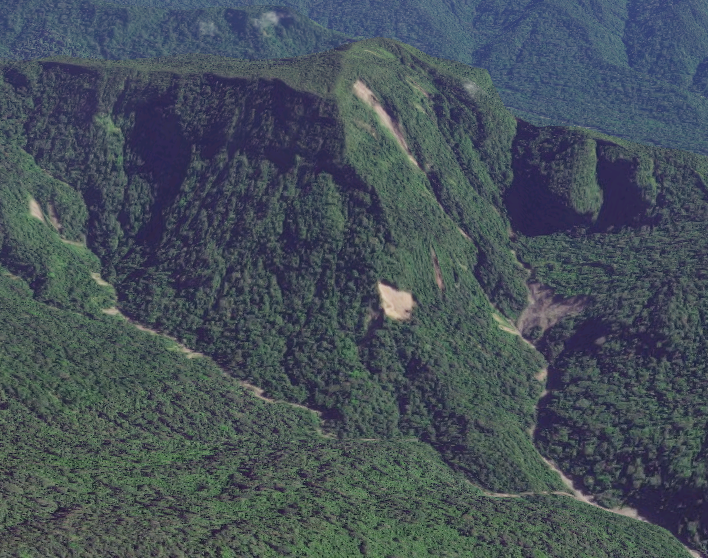 Reminds me of the game series Uncharted where it feature lost cities that house dangerous supernatural items.

I wonder if some intreped armchair archaeologist could find this city from their computer.

Reminds me of the game series Uncharted where it feature lost cities that house dangerous supernatural items.

That made me laugh as I recently finished Uncharted 4 my first venture into the series. Just before checking ATS I was playing Uncharted Golden Abyss on the PS Vita whilst watching the box. This op definatley could be a story plot for a new installment.

a reply to: LSU0408
Great post S&F it really gets the mind racing lost untouched archaeology and treasure. Something finaly worth reading (claps). To kneel or not to kneel is thy question has really been over done the last few days. Thankyou so much for a brillant post.

Yeah I'm pretty sick of the kneeling controversy, too... I'd give anything for a shot at going to Peru to see if I, and team of other amateurs (or pros), could find the ruins of this lost city. My friend had Uncharted when he first got his PS3 and it looked really fun. I love adventure games like that but always end up settling for first person shooters. I did give Friday the 13th a shot though, and it's fun when you're online with friends.

Yeah...I read the book myself, pretty incredible story about Percy and the Royal Geographic Society. I had no idea the atrocities committed concurrently by the rubber wildcrafters to the natives while supplying Goodrich et al.

posted on Sep, 26 2017 @ 12:27 PM
link
I imagine that if you're really looking for a gold city, you might want to look someplace close to where there is a lot of gold mining activity nearby. Gold is heavy. You don't want to build your golden city too far away from the mine.

I enjoyed the movie as well. Nice thread.

Would be a great little expedition with the right equipment and supplies.

There is laser scanning from aircraft. That's helped relocated thousands of cities lost to the jungle:

Have not seen the movie will have to check it out.
I am working hard, investing what I can and keep buying lotto tickets, if money/bills permit Peru is at the top of my list.


You can using LiDar

originally posted by: Blue Shift
I imagine that if you're really looking for a gold city, you might want to look someplace close to where there is a lot of gold mining activity nearby. Gold is heavy. You don't want to build your golden city too far away from the mine.

They might have had gold stored there, not necessarily a temple of gold. I would be looking for stone if I was there...and booby traps.

Heck yeah it would. Just try to learn the common native language and the deadly things that surround you and you're golden. No pun intended...

Are you talking about how they were enslaving them?

Very nice. I wonder if they can pick up cities covered in greenery, shrouded by jungle and trees or if it would look like part of the jungle, untraceable.

originally posted by: aliensanonymous
a reply to: LSU0408

Have not seen the movie will have to check it out.
I am working hard, investing what I can and keep buying lotto tickets, if money/bills permit Peru is at the top of my list.


Make sure you're trained. Hundreds have gone in and not many come out. If you're an Amazon (no pun intended) Prime member, you can watch it for free. They just added it.